Welcome to the third part of the series, in this post I’ll tell you about the set and multiSet structure and continue our journey on data structure and algorithm. 👩‍💻👨‍💻 However, I recommend reading the hashtable post if you are not familiar with data structures.

Because, unlike the last post when we landed on a strange terrain, here we will be in a place where we should have seen it before. The focus of this post is to learn what a set is with examples of how it works, code implementation using javascript and, of course, answer any questions about it. This data structure is not difficult to learn at first, but it can be a bit complicated.

💭 "Those hours of practice, and failure, are a necessary part of the learning process."- Gina Sipley

The article is divided into the following parts:

As you can imagine you already have some basic understanding about what is the sets structure. Basically is a collection of unique elements that can be objects, numbers, strings, Pokémon's ... In other words, anything! 😁

We can also find in many language that support the set such as Java, C, Python, ASP.NET and so on. For instance, the ECMAScript 6 or ES2015 introduced the Set data structure to the JavaScript language. We can initialized by calling:

Despite the fact that we can use this implementation, we will avoid and build our own because the goal here is to learn how this structure works behind the scenes.

With that in mind, what we need to create our structure is use an array and add some element. We can also use the list structure, but it is an inefficient and simple implementation where operations such as inserting or deleting do not perform well. Having been said that, there are better approaches to implemented using more efficient data structures such as trees, tries, or hash tables, however, in this post we will use the array and the hash table that we already have seen in this series.

Great! We already have a basic understanding of how we can build the structure of the set, now let's discuss some properties. Every value you insert have to appear only once because this structure does not allow repeated values, see the example below:

Moreover, other important factor about this structure is related by the fact that we do not need to order the elements, for instance:

We can say that this structure is an implementation of the mathematical concept of a finite set using the operations of the algebra of sets. Okay, let's put everything that we had learned into our code. But first things first, we will be creating the skeleton off our set class and, as you can notice we have two functions created.

But, wait a second! ✋ Before insert some values we must make sure if the value that we intend insert is not in our array. In the insert() function use the indexOf() propriety to verify if has any occurrence of a specified value in our structure. This method returns the position of element, however, if the array does not contain the data, the value -1 will be returned. We can use a similar logic in remove() function.

As mentioned earlier, this structure is based on the mathematical concepts of sets; therefore, we can use its properties in our code to define some operations using set algebra, such as union and intersection. Let's have a brief discussion of the core set theoretical operations, so take a look below:

As the name suggest this operation will join two sets resulting in a new set structure that combine all members of either A or B set. We can use the math definition to define this operation:

Let's put in an example:

To give an illustration of how the union operation is, take a look at the following image: 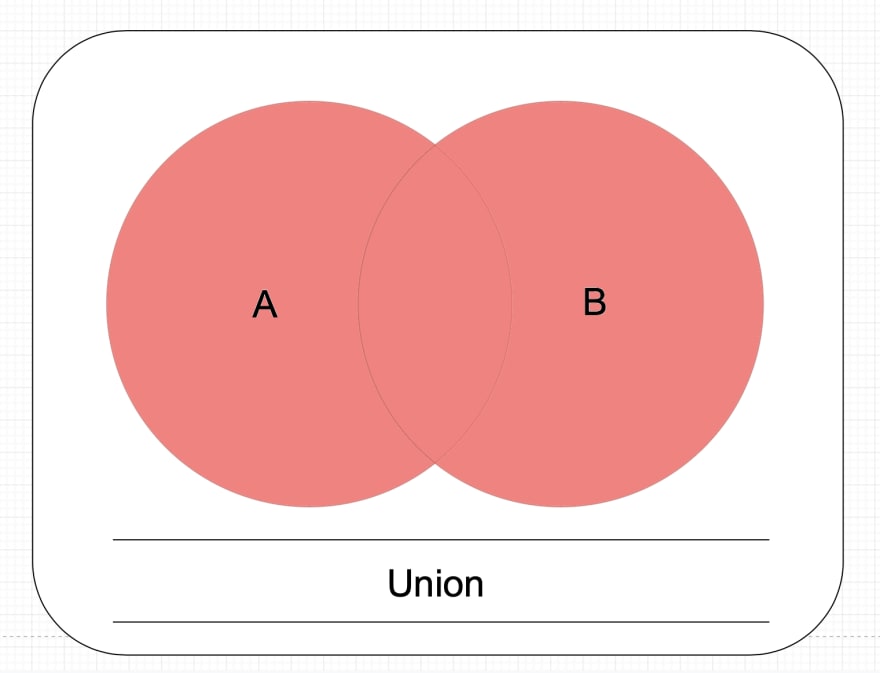 Figure 1: The union of A and B

Now that we already have a clearly understanding, let's see how it works in our code.

In this operation a new set is created using all elements that the both sets have in common, that can be denoted by A ∩ B. In case of A ∩ B = ∅, then A and B are considered disjoint. The math concept about the intersect is defined as the following: 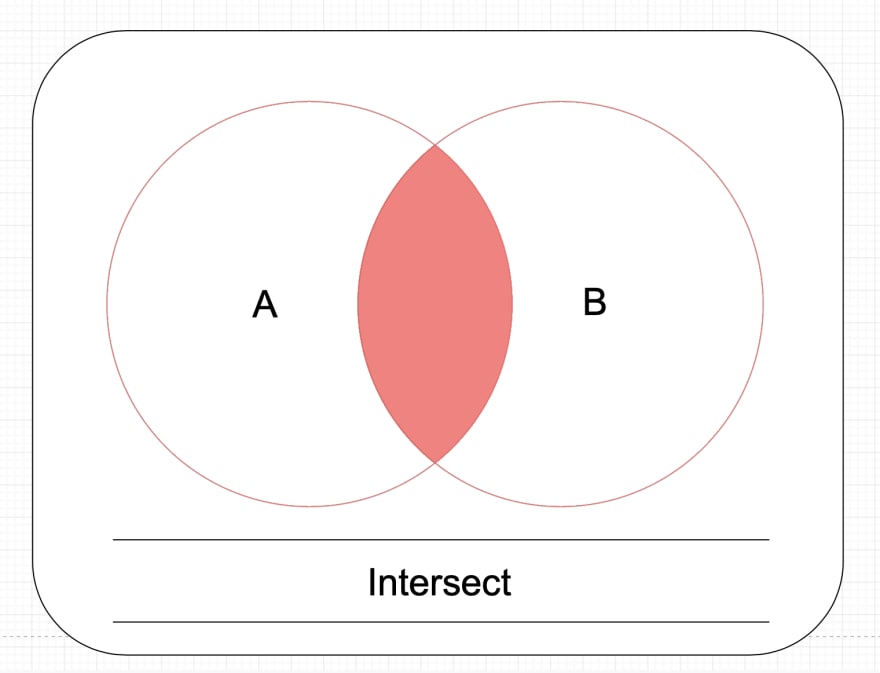 Figure 2: The intersection of A and B

And we can write the function that receives a set as parameter like this:

The difference operation, or complement if you prefer, is the difference between the set A and B. But what does it mean? 🧐 In other words, is the result of the values that contains in only one set and can be denoted by the following definition: 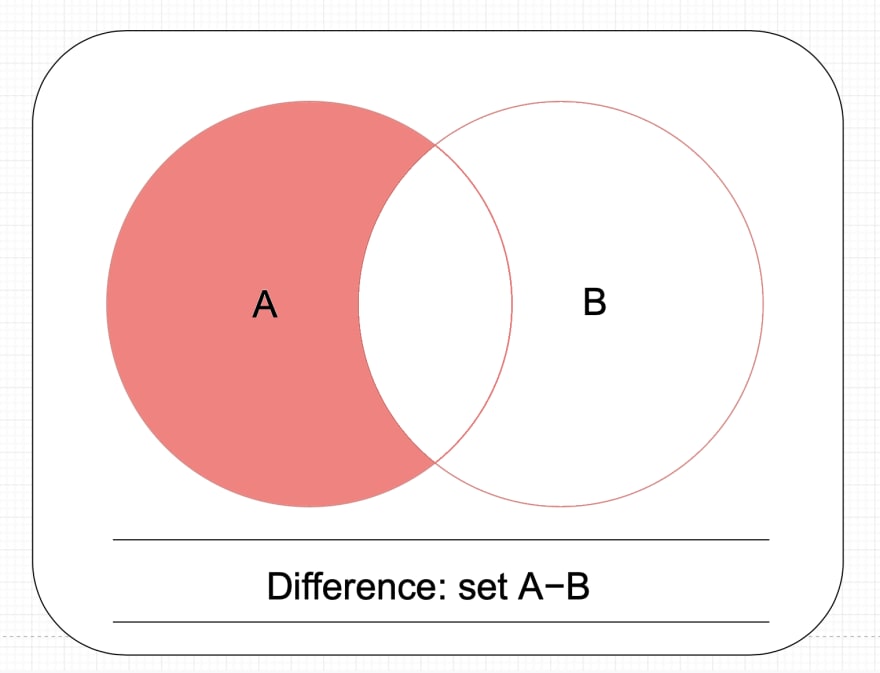 Figure 3: The difference of A and B

Similar to union and intersect functions, we can iterate the list to get the difference between the sets:

Another operation that we can create is the symmetric difference, also know as disjunctive union, which is the set where the elements not below in their intersection. 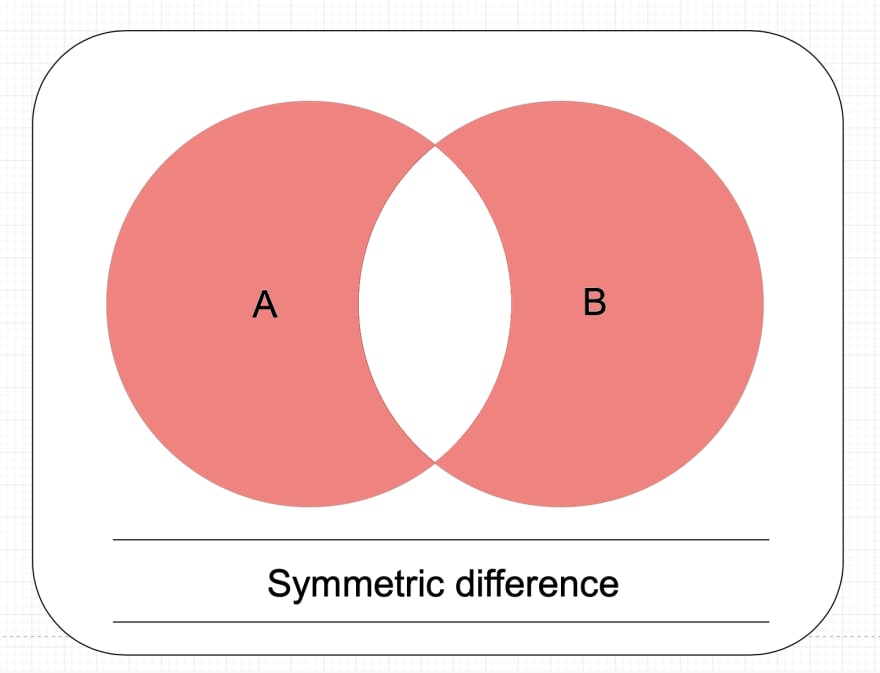 Figure 4: The symmetric difference of A and B

⚡️ If you would like to know others functions that I implemented such as removeAll, getAllSubsets, contains, and others, you can access all the code just clicking here.

The next operation define if every value of set A belongs to the set B and vice-versa. If they contain each other can denoted as A ⊆ B, which can be write as A is contained in B, is equivalent to A = B.

It is quite similar to subset operation, but two sets can be considered as proper subset if one set is not equal to another but has at least one element.

The set is mutable, however, we can create immutable frozenset objects initialized with elements of the given iterable. Which is a set that does not change after being build. In Python, we can use the frozenset () function to create this structure.

The Multiset structure or Bag is quite similar to set structure that we have learned before, but the difference is due to the fact that unlike the set structure allows more than one instance of the element in the structure.

An amazing thing that about programming it that there are many ways to develop the Multiset, we can continue using an array to store the values, or tuples if you are developing in Python.

This structure has the following properties:

Since multiset is a type of set generalization, there are several ways to apply it to problem solving, Fuzzy multisets and Rough multisets, are some examples.

Now that we already know what Multiset is, let's create the main operations, which are: insert and remove.

We can use the hash table in our Multiset structure, that is to say, the time complexity is always a constant O(1) to add or search an element. As you can imagine this structure has the same functions as the set, however, there are some differences that we are going to learn together. 🤓

The algebra operations such as union, sum, intersect and difference have similar logic applies as the previous methods described before, so I’ll skip the code explanation of them to not waste our time and only discuss about the difference.

The main difference in the union of two multiset is that each element has the number of instances equal to the maximum of the multiplicity in A and B.

In this operation the intersection of two multisets is equal to the sum of the multiplicity of an element in A and B.

The intersection of two multisets is equal to the minimum of the multiplicity of an element in A and B.
⁡

In conclusion, the most important factor that make the set structure special and unique comparing with the others is that use the core set-theoretical operations defined by the algebra of sets, which allows the use of properties and laws of sets using operation such as union and intersection. In this post we have a brief discussion about this operations.

We have learned that sets can be implemented using various data structures but the most common approach is using array or hash table. Even though the set structure looks like a simple structure there are many languages now include it can be applied in diverse scenarios and different generalizations, such as Fuzzy multisets, rough multisets and in relational databases.

That's all folks! I hope you have fun learning the set structure 😁

So we finished our discussion about Set and Multiset data structure. 🙌

I hope you have a clear idea how to work. If you found this article helpful or if you find something I miss out or that you like it, feel free to let me know. 😁

Once suspended, fernandoblima will not be able to comment or publish posts until their suspension is removed.

Once unsuspended, fernandoblima will be able to comment and publish posts again.

Once unpublished, all posts by fernandoblima will become hidden and only accessible to themselves.

If fernandoblima is not suspended, they can still re-publish their posts from their dashboard.

Once unpublished, this post will become invisible to the public and only accessible to Fernando Baptistella .

Thanks for keeping DEV Community 👩‍💻👨‍💻 safe. Here is what you can do to flag fernandoblima:

Unflagging fernandoblima will restore default visibility to their posts.