In this article we're going to take a closer look at an open source demo published by @coldi. Coldi made a game, called Colmen's Quest (that you should definitely check out), using react and react-three-fiber. He was kind enough to share the core engine that he made for his game to the community.

It might sound odd to use a 3D library like ThreeJS to make a 2D game but it is actually not that uncommon at all. For example Unity, the popular 3D game engine, is also used a lot for 2D games like Hollow Knight.

Speaking about Unity, the game architecture that Coldi used is also inspired by Unity and resolve around the concept of GameObject components that we will talk about just after.
Adding react-three-fiber to the stack provides a terrific dev experience to make a webgl game with React.

This project is a really valuable learning material. By exploring it in this article we will learn a lot about game dev techniques, react-three-fiber and also React knowledge in general. We will also try to apply our newly acquired knowledge by tweaking the demo a bit. Let's dive in !

Let's start by analyzing the elements and features that we have in this demo.
We have:

We can start by cloning the demo here:

This repo shows an example implementation of a top-down 2d game made with React and react-three-fiber.

I used the core functionality to create Colmen's Quest and wanted to give you an idea of how a game can be done with React.

This is by no means the best way to build a game, it's just my way.

I suggest you use this code as an inspiration and not as a starting point to build your game on top of it. I also do not intend to maintain this code base in any way.

You can start the game by yarn && yarn start, then open your Browser.

To get a better understanding of the architecture I used, you may want to read this thread on Twitter.

Also Florent Lagrede (@flagrede) did an amazing job in writing an… 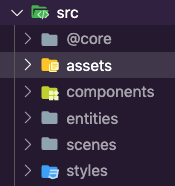 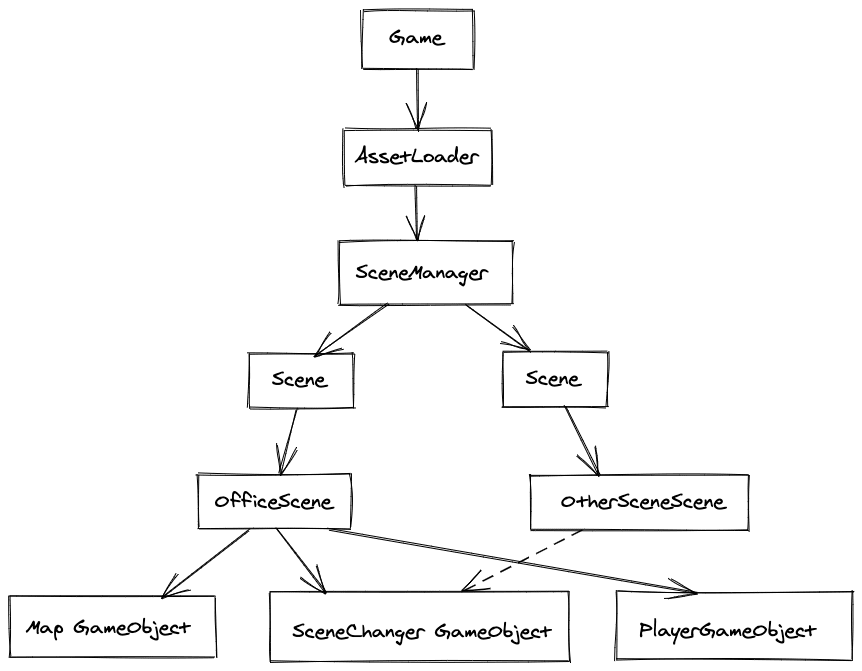 We're going to explain each of them.

This component has 4 main features:

This component will load all image and audio assets of the game with the Image and Audio web object. It also displays an html overlay on top of the canvas while the assets are loading.

This component holds the state regarding the Scene currently being displayed. It also exposes a method setScene through a Context in order to update the current scene.

This component, besides displaying its children GameObject, will dispatch the events scene-init and scene-ready whenever the current scene changes.

There is also a level system present in the file that is not being used by the demo.

Now we are going to look a little deeper, inside the code of the OfficeScene.

The GameObject component we saw earlier is the most important piece of the architecture. It represents almost every element in the game world. For example for the OfficeScene just above we have 3 GameObject:

GameObject holds state information like position, enabled/disabled or its layer in the game (ie: ground, obstacle, item, character ...). They can contain other GameObject as well.
GameObject can also contain other components that Coldi called Scripts. These scripts can hold the logic for interaction, collision or movement for example. Basically game objects are a composition of these reusable Scripts and other GameObject. This is a really powerful API because you can describe a game object behaviour component by just dropping components in it.

We're going to explore more the 3 GameObject we saw earlier:

This component will create the map of the Scene based on an entities mapping string. For example the Office mapping string looks like this:

Inside the OfficeScene there is a function called resolveMapTile which will map each character to a game entity. Entities are GameObject that match a real element in the game world.
In this case we have the following entities mapping:

The child component TileMap will then be responsible to return the map base on the entities mapping string and the resolveMapTile functions.

The final map is a 2D grid, with each cell holding one or several GameObject components.

Let's take a closer look at what an entity looks like. We're going to look at the Workstation one.

We can see the GameObject component we were talking about and some child components(Sprite, Collider, Interactable and WorkstationScript) that define its behaviour.

The Sprite component is responsible for displaying all graphical elements in the game.
We didn't talk much about react-three-fiber until now, but it is in this component that most of visual rendering happens.

In ThreeJS elements are rendered through mesh objects. A mesh is a combination of a geometry and material.

In our case for the geometry we're using a simple Plane of 1x1 dimension:

And for the material we're just applying the Threejs basic material:

With a plain basic material however we would be just seeing a simple square. Our sprites are actually displayed by giving the <texture> object, which will apply sprites to the <meshBasicMaterial>.

To sum up, the visual render of this demo is mostly 2D plane with texture applied to them and a camera looking at all of them from the top.

This component is responsible for handling collisions. It has two jobs:

The component also uses the hook useComponentRegistry to register itself to its GameObject. This allows other elements in the game (like the player) to know that this game object is an obstacle.

For now we just have added an obstacle on the map, let's continue with the next component.

This component is responsible for handling logic when the player interacts with other elements in the game. An interaction occurs when the player has a collision with another GameObject (this is why the Collider from earlier was needed).

The Interactable component, as the Collider, registers itself to its GameObject.

At last we have a script, specific to this entity, to handle some logic.
We can see here that this script is listening to the interaction event from earlier. Whenever this happens it just swaps the sprite of the computer.

We're going to add a monster entity, disguised as a plant. Inside the object sprite sheet asset, we can see that there are two plants that are not used in the demo.
The goal will be to use them to create a new entity called ZombiePlant and place it inside the other Scene.

When interacting with the entity, the plant should swap from one sprite to the other one.

We will also have to change both the entities mapping string and the resolveMapTile function inside the OtherScene. 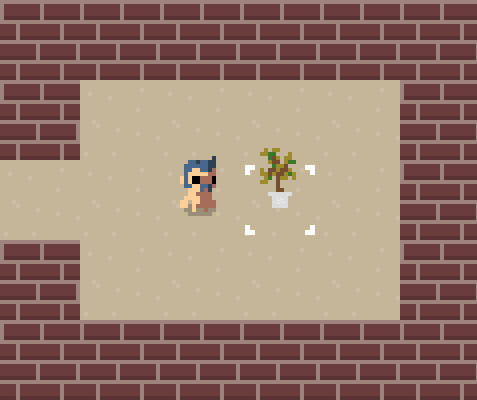 Now let's look at the components that handle the scene change.
This component will be triggered when the player steps on it.

To create this effect, the scene changer has 3 child components:

We are already familiar with some elements like Interactable and Collider. This shows us how reusable GameObject can be with this architecture. Let's look at the ScenePortal. 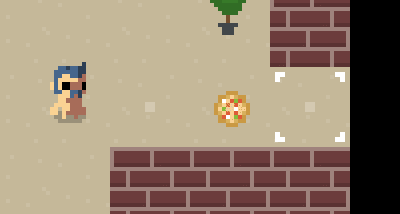 This component is responsible for doing the scene change when the player interacts with it.
It has the following props:

The component listens to the interaction event through the hook useInteraction. When he receives an interaction, it will check if it comes from the player. In that case the port function is called. It will change the current scene in the global game state. After that the component will wait for the SceneInitEvent and SceneReadyEvent to move the player in the right position and direction.

Let's try to visualize the whole workflow of the ScenePortal:

We're now going to explore the biggest GameObject of the game, the Player one.
The player GameObject looks like this:

We are still familiar with Interactable and Collider.
Let's see what the new components are doing.

This component just exposes an API, it does not listen to any events. It means that there will be another GameObject that will call the Movable's API to move the GameObject using it (in our case the Player).

The most important method is the move one. It takes a targetPosition as parameter, checks if this position is a collision and if not move the GameObject to it.

It also triggers a lot of events that can be used elsewhere. The events sequence look like that:

Also the method move uses the animejs library to animate the player sprite from one position to another.

This component is responsible for doing some animation to the Player Sprite. The script handle:

To sum up this component perform sprite animation by listening to movement events from the Moveable component.

Final piece of the Player entity, the PlayerScript.
This component handles the logic that the player can do. It will deal with both cursor and keyboard inputs.

There are 4 hooks useKeyPress that add the listener to the key given in parameter. These hooks return a boolean whenever the listed keys are pressed. These booleans are then checked inside a useGameLoop, that we saw previously, and compute the next position consequently. The new position is set in the local state of PlayerScript.

This part is a bit more tricky. While the keyboard controls could move the player one tile by one tile, the cursor can move it to several tiles. It means that the whole path to the selected position must be computed before moving.

In order to do that the method use a popular path finding algorithm named A star (or A*). This algorithm computes the shortest path between two points in a grid by taking collision into consideration.

As for the keyboard events the new position is updated into the local PlayerScript state. In addition the path is also displayed visually in this case. In the render method there is PlayerPathOverlay component which is responsible for doing just that.

Moving to the new position

In both cases we saw that the new position is updated in the local state of the component.
There is a useEffect that listens to that change and that will try to move the GameObject. Remember the Moveable component from before ? Here we get it and call its move method on him. If the move is not possible, the method returns false. In that case we will try to interact with the GameObject that is in the position that the player couldn't go to.

This was a big piece but now we should understand how game objects work together, let's try to make a new thing now.

Remember our ZombiePlant entity? We're going to add some new features to it:

This is it, we've gone through most of the demo !
I hope you learned a lot of things in this demo walkthrough (I did). Thanks again to @coldi for sharing this demo with the community.
Also as he said a lot of things could have been implemented differently. For example the collision system could have been done with a physic engine like react-use-cannon.
This is still a terrific example of how to make games with react-three-fiber.

Hopefully this gives you some ideas to make a game of your own !

If you're interested in front-end, react-three-fiber or gamedev, I will publish more content about these topics here.

Thanks for reading, happy coding.

Redux vs Context API: When to use them

Building a web3 frontend with React

Simplest Drag and Drop setup in React, in 10 lines of code with SortableJS