I tried to resist but I am going to have to write about the new Star Trek series Discovery. Warning this post is going to include SPOILERS. If you read on you have been warned.

I watched the first two episodes of the brand new Star Trek TV show. As I am an international viewer I used Netflix, if you are from the US you need to use CBS All Access. 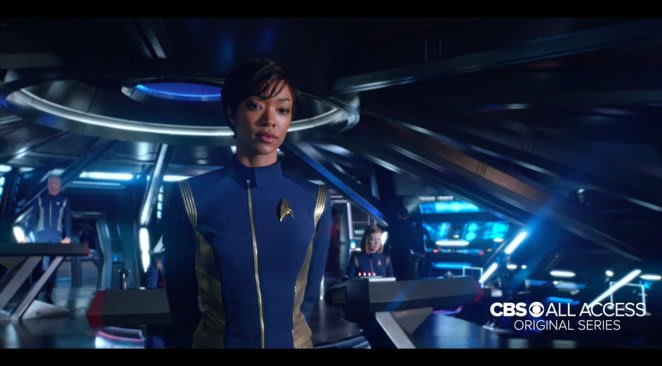 I have heard a lot of complaining that the show is not free to watch. CBS is making Star Trek Discovery to make money, if they don’t make money they will stop making it. Its as simple as that.

Netflixcosts £5.99 per month and CBS All Access costs $5.99 per month. I don’t believe this is a lot of money. The 5.99 above allows you to watch any of the 726 Star Trek episodes at any time of day whenever you want as many times as you want, plus you have access to all the other movies or TV shows available. I don’t think this is too much to ask.

Back to Discovery. I loved it! It felt like Star Trek. I had feared it might only share the name and would be an action filled TV show that had little in common with what he had seen before. I was wrong this is definitely a show that can proudly call itself Star Trek.

When it was first announced that the Klingons would feature in the new show I was a bit “meh”. We had done lots with the Klingons before and they had never been my favourite alien race. 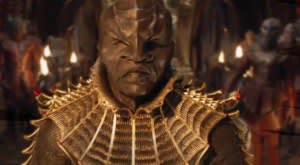 The look of the Klingons was also going to be changed, I have to admit this didn’t bother me. Klingons have had their look updated before. In 1966 Klingons had dark faces and smooth foreheads, in 1979 the forehead ridges were added as the first Star Trek movie was made, and now Discovery has removed all hair from Klingons. I can explain it away as productional changes, I don’t need an on screen explanation like we had on Enterprise (or even DS9).

What I have seen so far is a menacing alien race that fits with what we have seen before with lots of references to honor, Kahless and speaking Klingon. I must admit reading all the subtitles is getting a bit tiresome, but that is a minor issue.

Historically Star Trek has not featured conflict between the main starfleet characters due to the idea that humanity has evolved beyond this. DS9 got round this by having Odo and Kira who are not starfleet characters so can have a little bit of conflict. Discovery has completely abandoned this idea.

In the pilot episode, the Michael Burnham commits mutiny on her captain, even attacking her with a vulcan nerve pinch. In the third episode we finally meet the discovery crew. Gone are the TNG days where the ships crew are like a family, I am not sure I can think of a single character that would call another character “friend”. We are in a time of war so this would be expected, however I do hope we see deepening friendships form between characters.

I am OK with the change to feature more conflict. I must admit the darkness of the third episode, did stop to make me think a bit, however by the fourth episode I was won over.

The story is concentrated around Michael Burnham, so I do worry that other characters won’t get a look in. However from what I have seen Michael Burnham is a great character. She is a strong female character, with a intriguing back story relating to Sarek and possibly also Spock.

Saru the alien character on the show, played by the very tall Doug Jones is great. From the trailers he was all about sensing death, but there is far more to him than that. I am looking forward to learn more about him and his threat ganglia.

As the show has gone on we have started to learn about the other characters like Captain Lorca, Tilly and Paul Stamets.

I don’t like the opening title sequence, it feels very cheap like a draft version which hasn’t been finished yet. I was looking forward to a title sequence that would show off the USS Discovery, maybe like TNG where it warps around our own solar system. What we see is some of the tech that features in Star Trek which is nice but I want more. The theme tune while great that it features parts from the classic theme doesn’t stand on its own. I can hum all the other TV shows themes, and now after 4 episodes would struggle to do that.

However I expect that after a while I will grow to like this more.

I like Discovery and I will keep watching it. I want to find out what happens to the characters. There are no annoying characters like other shows have had. There is character development, none of the characters are going to finish where they started. I want more friendship between characters, but I expect that will come, I want more exploring and doing Star Trek stuff, but most of all I want more episodes, roll on next weeks show.

Other things I noticed

Alert!! Operators are Functions in Javascript ??

Simon Foster
Software Developer based in the North of England. More than just another developer.
A Comparison of All Good Things... and Star Trek Picard
#startrek #picard
Picard is back!
#startrek #patrickstewart #picard
Star Trek is back with Discovery
#startrek #discovery

Once suspended, funkysi1701 will not be able to comment or publish posts until their suspension is removed.

Once unsuspended, funkysi1701 will be able to comment and publish posts again.

Once unpublished, all posts by funkysi1701 will become hidden and only accessible to themselves.

If funkysi1701 is not suspended, they can still re-publish their posts from their dashboard.

Once unpublished, this post will become invisible to the public and only accessible to Simon Foster.

Thanks for keeping DEV Community 👩‍💻👨‍💻 safe. Here is what you can do to flag funkysi1701:

Unflagging funkysi1701 will restore default visibility to their posts.