Pwned Pass is now available from the Google Play Store. 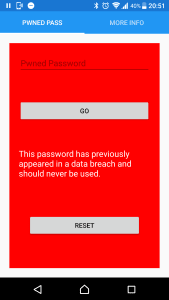 Pwned Pass is a simple android app that allows you to type in a password and tells you if it has been used in a data breach.

Troy Hunt of Have I Been Pwned? recently added a new API to his website which allows you to search his extensive database of pwned passwords, 306 million of them. I have simply created a Android frontend to this API.

The API itself takes a SHA1 hash of the password and either returns a HTTP 200 if the password is found or a HTTP 404 if the password does not exist in the HIBP database. For more details of how Troy Hunt created this check out his blog post.

My app simply generates a SHA1 hash of anything that is typed in and then passes this to Troy Hunt’s API. I then get the HTTP return code so I know if the password exists or not.

It should be noted that: Do not send any password you actively use to a third-party service – even this one! I don’t log anything that you type into my app and all I am then doing is passing a SHA1 hash over SSL to HIBP. However you shouldn’t trust my word alone.

The app itself is written in Visual Studio with Xamarin Forms in a similar fashion to the app I talked about last week.

As I am using Xamarin Forms there is the potential that I may develop iPhone or UWP versions of this code in the future. With that in mind I have made use of interfaces for the android specific parts of the code.

I also make use of the modernhttpclientnuget package due to problems I encountered with httpclient and SSL. This is due to limitations of what libraries are available in mono and what has been implemented, I suspect there are better ways to solve this but that is all part of the fun.

Please do have a look at Pwned Pass and let me know what you think. Especially if it doesn’t work or throws errors. I would like to spend time making this app as good as I can make it.

Nobody is working for 8 hours a day, Why?

Start.Dev.Change - An Intro to Mobile Development!