You know how the python folks can just write some code in a .py file and run it with python3 filename.py, without going through the "new project" and the "public static void main" ceremony that C# users have to? C# can write scripts too – something I learnt just like a year back.

The tool that I've been really fascinated by is dotnet-script, which is a cross-platform .NET Core global tool with full intellisense support on VS Code via omnisharp and covers most use-cases for your experimenting needs.

First make sure you have the latest version of .NET Core SDK installed from dot.net. The minimum requirement is .NET Core 2.1.

The easiest way to install dotnet-script is installing it as a global tool:

You should now be able to run dotnet script --version and it should print the version of the dotnet-script tool. 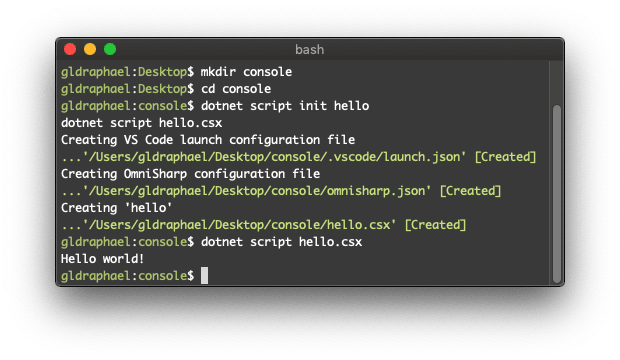 The generated hello.csx file has the following contents:

The first line is a shebang that *nix users must be familiar with. It means we can run it as ./hello.csx and it'll just work! (Also works on windows, but you'll need to associate .csx files with dotnet-script first using dotnet script register.)

A typical use-case for console applications is to experiment with new libraries, and dotnet-script is the perfect tool for the job. Let's say I'm learning about the stateless library. Here's how I'd go about experimenting:

Notes for those new to developing using VS Code:

That's it. If you ask me I think it's pretty slick.

What I love about dotnet-script is:

🎵These are a few of my favorite tools: "Favorite Documents" Visual Studio extension