The factory concept is probably the most common design patterns and recurs throughout the object-oriented programming.

You will find countless references and uses of the factory pattern within the .net core foundational libraries and throughout the .net framework source code, most notable and probably one of the most commonly used factories can be found in the System.Data.Common namespace and the DbProviderFactories.

What is the Factory Method Pattern

The factory method pattern is a clever but subtle extension to the concept that a class acts as a traffic cop and decides which subclass of a single hierarchy will be instantiated.

In the factory pattern, developers create an object without exposing the creation logic. An interface is used for creating an object, but lets subclass decide which class to instantiate. Rather than defining each object manually, developers can do it programmatically.

In short, a factory is an object that creates objects without the use of a constructor.

The pattern does not actually have a decision point where one subclass is directly selected over another class. Instead, programs are developed implementing this pattern usually define an abstract class that creates objects but lets each subclass decide which object to create.

When to use a Factory Method

The are a number of circumstances when developing an application when making use of the Factory Method is suitable. These situations include :

It is generally considered a bad idea for base classes to know implementation details of their derived types. It is in situations like this is when you should use the Abstract Factory pattern.

A Typical situation maybe when a constructor needs to return an instance of type within which it resides, a factory method is able to return many different types of objects, all which belong to the same inheritance hierarchy.

How to implement Factory Pattern 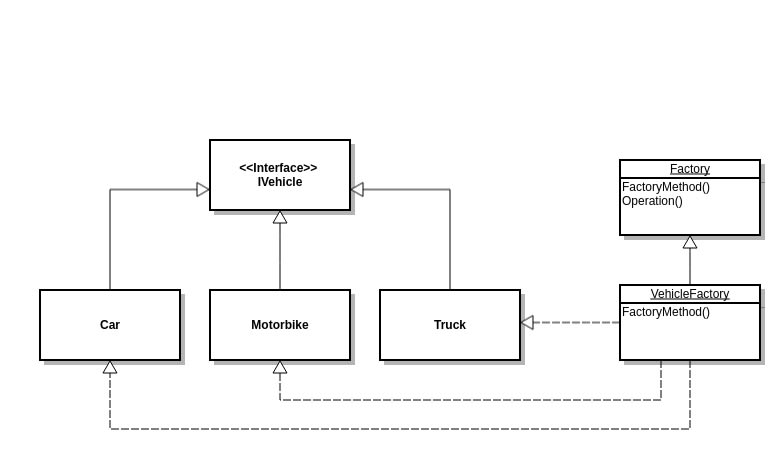 If we pass the number of Wheels to our factory method it will build the vehicle and return it.

We'll keep this example trivial so we don't get lost in the detail, so we will define a simple interface of IVEHICLE which is nothing more than an empty interface.

We can now create a VechicleFactory class with a build method to create a vehicle depending on the number of wheels supplied.

We can now develop our little game, in this example it will be a Console Application, and we'll ask the user to enter a number of wheels and then we'll tell them what type of Vehicle they built.

If you start the Console Application, you'll be asked a question to enter a number between 1 and 12 and a vehicle will be created depending on the number of wheels supplied.

This is obviously a very trivial example of a Factory Method just in order to put a point across, as to how to actually use them.

If you're looking for a more complex implementation of a Factory Method pattern, take a look at the source code of my Threenine.Map application and more specifically the class I have cunningly named the MapConfigurationFactory.

You'll notice that this class, is basically the main brain of the application and is responsible for building and loading all the mapping configurations that have been defined within the application.

It has a number of entry points defined, but the main method I always use is the Scan method, which ultimately is the Abstract Factory Method.

The library itself contains just 3 interfaces ICustomMap, IMapFrom, IMapTo , which enable developers to implement various mapping logic and associate it with the POCO or Entity classes it relates too. For detailed explanation to how it works check out the documentation.

In brief, what the MapConfigurationFactory does, it uses reflection to iterate through all the libraries contained in an assembly and retrieves all the classes have been marked with any of the interfaces and loads the Mappings to the Automapper - a Convention-based object-object mapper.

The Factory Method pattern, in my opinion, is one of the most important patterns to understand in software development. It's the one pattern that in all likelihood that you'll most often implement. factory design pattern is used to instantiate objects based on another data type. Factories are often used to reduce code bloat and make it easier to modify which objects need to be created.

The post How to use Factory Method Design Pattern in C# appeared first on Gary Woodfine.

Getting Started with the .NET MAUI DataGrid Control

Once suspended, gary_woodfine will not be able to comment or publish posts until their suspension is removed.

Once unsuspended, gary_woodfine will be able to comment and publish posts again.

Once unpublished, all posts by gary_woodfine will become hidden and only accessible to themselves.

If gary_woodfine is not suspended, they can still re-publish their posts from their dashboard.

Once unpublished, this post will become invisible to the public and only accessible to Gary Woodfine.

Thanks for keeping DEV Community 👩‍💻👨‍💻 safe. Here is what you can do to flag gary_woodfine:

Unflagging gary_woodfine will restore default visibility to their posts.