In the last posts we saw some basic abstractions used in functional programming: Eq, Ord, Semigroup and Monoid.

In the next posts we will explore some advanced abstractions that make functional programming even more interesting.

Storically the first advanced abstraction contained in fp-ts is Functor, but before we can talk about functors we need to learn something about categories since functors are built upon them.

We need a formal definition of composition. That's what categories are all about.

Categories capture the essence of composition.

The definition of category is a bit long so I'm going to split its definition in two parts:

A category is a pair (Objects, Morphisms) where:

Note. The term "object" here has nothing to do with OOP, you can think of objects as black boxes you can't inspect, or even as some kind of ancillary placeholders for morphisms.

Each morphism f has a source object A and a target object B where A and B are in Objects.

There's an operation ∘, named "composition", such that the following properties must hold 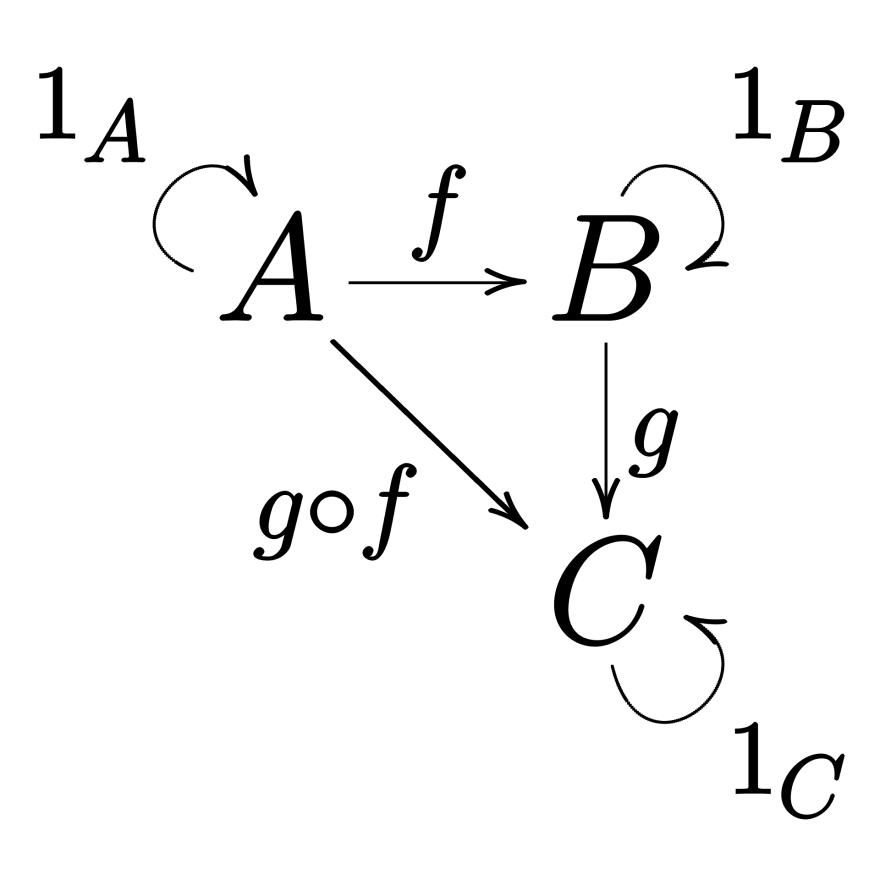 This category is quite simple, there are only three objects and six morphisms (1A, 1B, 1C are the identity morphisms of A, B, C).

A category can be interpreted as a simplified model of a typed programming language, where:

can be interpreted as a fairly simple, immaginary programming language with only three types and a small bunch of functions.

A category for TypeScript

We can define a category, named TS, as a model for the TypeScript language, where:

As a model for TypeScript, TS might seems too limited: no loops, no ifs, almost nothing... Nonetheless this simplified model is rich enough for our main purpose: reason about a well defined notion of composition.

The central problem with composition

But what if B != C? How can we compose such functions? Should we just give up?

In the next post we'll see under which conditions such a composition is possible. We'll talk about functors.

TLDR: functional programming is all about composition

Once suspended, gcanti will not be able to comment or publish posts until their suspension is removed.

Once unsuspended, gcanti will be able to comment and publish posts again.

Once unpublished, all posts by gcanti will become hidden and only accessible to themselves.

If gcanti is not suspended, they can still re-publish their posts from their dashboard.

Once unpublished, this post will become invisible to the public and only accessible to Giulio Canti.

Thanks for keeping DEV Community 👩‍💻👨‍💻 safe. Here is what you can do to flag gcanti:

Unflagging gcanti will restore default visibility to their posts.