Why finding solutions to this problem is so important?

Therefore solving the problem also means to find how to compose programs in a general way. And this is pretty interesting for a developer, isn't it?

We call pure program a function with the following signature

Such a signature models a program which accepts an input of type A and yields a result of type B, without any effect.

We call effectful program a function with the following signature

Such a signature models a program which accepts an input of type A and yields a result of type B, along with an effect F, where F is some type constructor.

Recall that a type constructor is an n-ary type operator taking as argument zero or more types, and returning another type.

Here we are interested in n-ary type constructors with n >= 1, for example

Now back to our main problem

Since the general problem is intractable, we need to put some constraint on B and C.

What about the other cases?

In which the constraint B = F<C> leads to functors

Let's consider the following constraint: B = F<C> for some type constructor F, or in other words (and after some renaming)

In order to compose f with g we could find a way to lift g from a function (b: B) => C to a function (fb: F<B>) => F<C> so that we can use the usual function composition (the output type of f would be the same as the input type of the lifted function)

So we turned the original problem into another one: can we find such a lift function?

All those lift functions almost look the same. It's not a coincidence, there's a functional pattern under the hood.

Indeed all those type constructors (and many others) admit a functor instance.

Functors are mappings between categories that preserve the categorical structure, i.e. that preserve identity morphisms and composition.

where C and D are two categories (aka two programming languages). 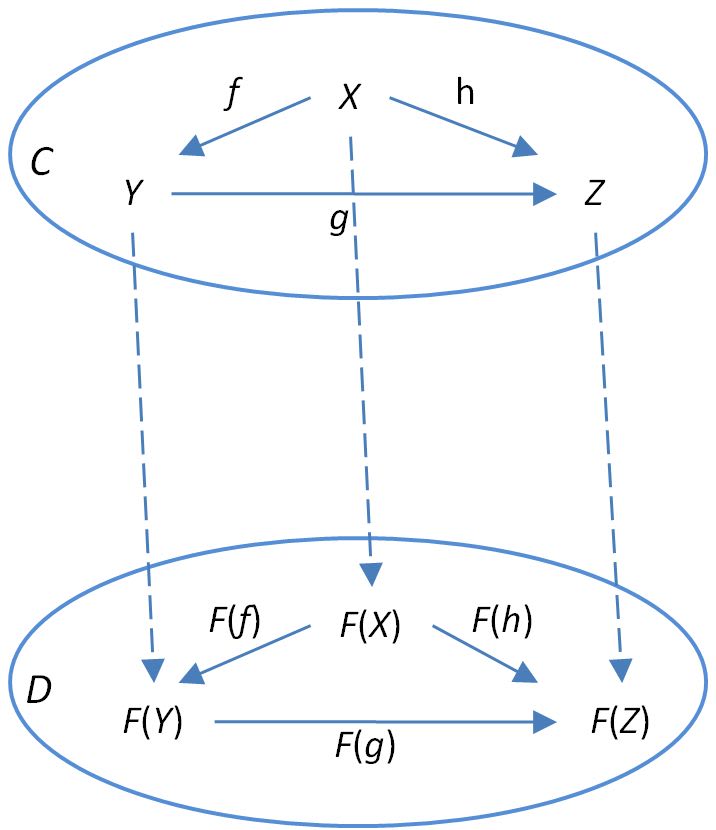 Even if a mapping between two different programming languages is an intriguing idea, we are more interested in a mapping where C and D coincide (with TS). In this case we talk about endofunctors ("endo" means "within", "inside").

From now on when I write "functor" I actually mean an endofunctor in TS.

A functor is a pair (F, lift) where

The following properties must hold

The lift function is also known through a variant called map, which is basically lift with the arguments rearranged

Note that map can be derived from lift (and viceversa).

How can we define a functor instance in fp-ts? Let's see a practical example.

Note that the body field is parametrized, this makes Response a good candidate for a functor instance since Response is a n-ary type constructors with n >= 1 (a necessary precondition).

Is the general problem solved?

Not at all. Functors allow us to compose an effectful program f with a pure program g, but g must be unary, that is it must accept only one argument as input. What if g accepts two arguments? Or three?

In order to handle such circumstances we need something more: in the next post I'll talk about another remarkable abstraction of functional programming: applicative functors.

TLDR: functional programming is all about composition

Once suspended, gcanti will not be able to comment or publish posts until their suspension is removed.

Once unsuspended, gcanti will be able to comment and publish posts again.

Once unpublished, all posts by gcanti will become hidden and only accessible to themselves.

If gcanti is not suspended, they can still re-publish their posts from their dashboard.

Once unpublished, this post will become invisible to the public and only accessible to Giulio Canti.

Thanks for keeping DEV Community 👩‍💻👨‍💻 safe. Here is what you can do to flag gcanti:

Unflagging gcanti will restore default visibility to their posts.