Running Expo/React Native in a Docker container can sometimes cause issues. In this example, I will be running Docker 🐳 within a guest VM (Ubuntu) which will run on my host machine (Windows). My host machine will also be running another VM as the Android emulator (Genymotion) for Expo to connect to. You can get a more detailed post about how to connect two VMs together here, #PlugPlugPlug 🔌🔌🔌. Since I’ve set up networking on those two VMs already as far as Expo is concerned it might as well be running on the host machine (Windows). Also in this example, I will be testing this on an Android device.

The package.json file I will be using the following example is a very barebones file, just including the minimum packages required to run Expo. 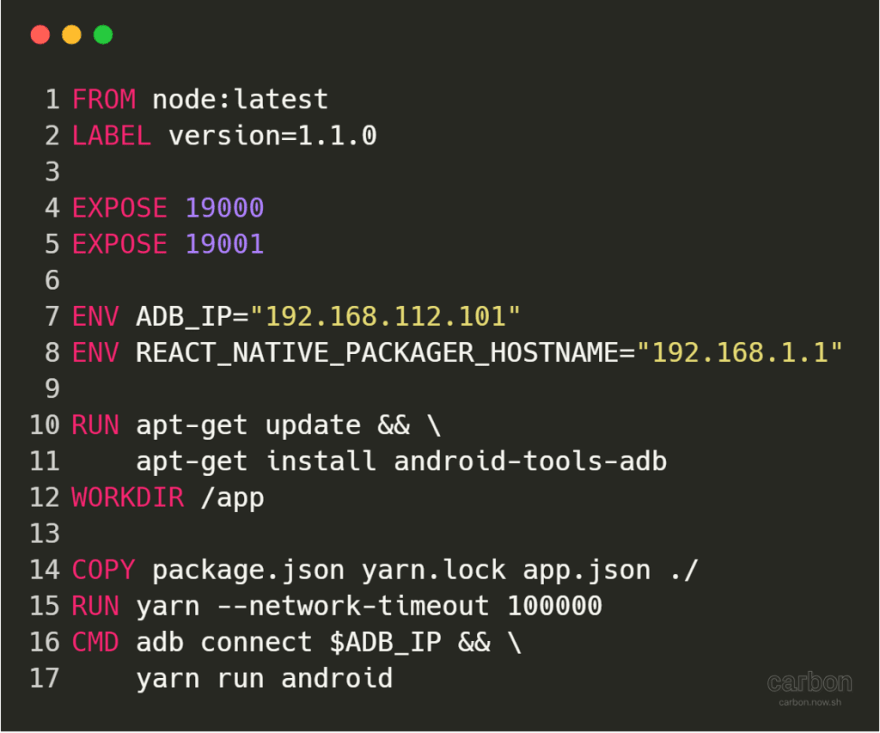 Tells us which Docker Image we are using as a base, in this case, the official node.js image. This is because it will have a lot of the dependencies we need already installed such as yarn and npm.

The ADB_IP is IP of the Android device 📱 to connect to. The REACT_NATIVE_PACKAGER_HOSTNAME environment variable is very important because it sets which IP address Expo (cli) is running on, this is the IP Address your phone will try to connect to. If this is not set correctly, you’ll get an error similar to Figure 1. You can work out the correct IP address on Linux by using the following command. The first one should host IP (192.168.27.128 on my machine).

The reason this environment variable needs to be set is because by default the React Native packager (which expo relies on) picks the first IP it sees on the machine, hence you can run expo on your host machine fine but when you run in a Docker container you cannot connect to it because it’s trying to use the Docker IP address (one of the ones starting with 172.xxx.xxx.xxx).

This is essentially meta data letting the user of the Docker container know that they can access data on those ports.

Install Android Debugging Bridge (ADB), which is used to connect to an Android device and debug the application.

Copy some important files from host to Docker container. The package.json and yarn.lock are used to install the dependencies and app.json is required by expo as a bare minimum. 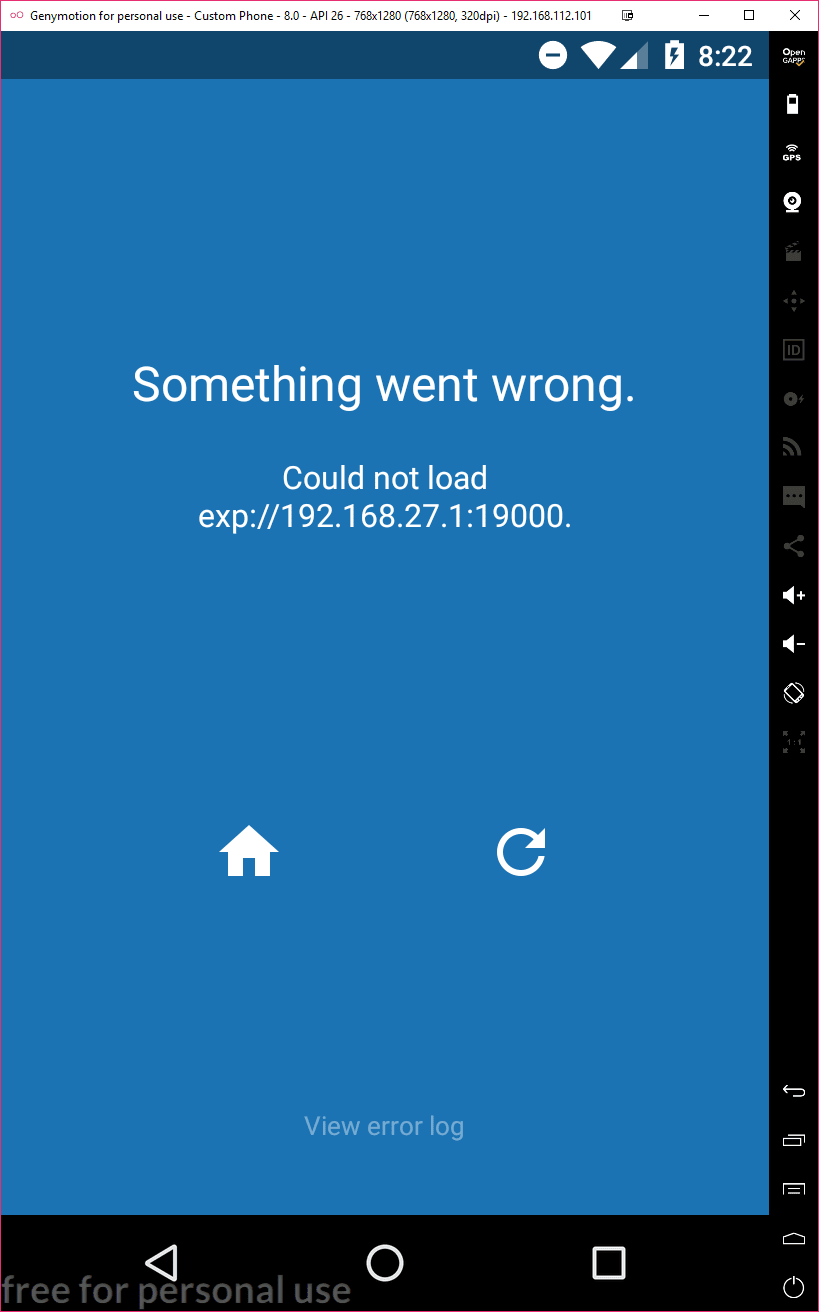 Figure 1: Could not connect error 😢

This command runs when the Docker Image is first to run, every other command is used to build to the image itself. This uses an environment variable passed into the Docker container and connects to the Android device at $ADB_IP. Then run the android command in package.json. Then you can simply run the following commands to build and start your Docker container. 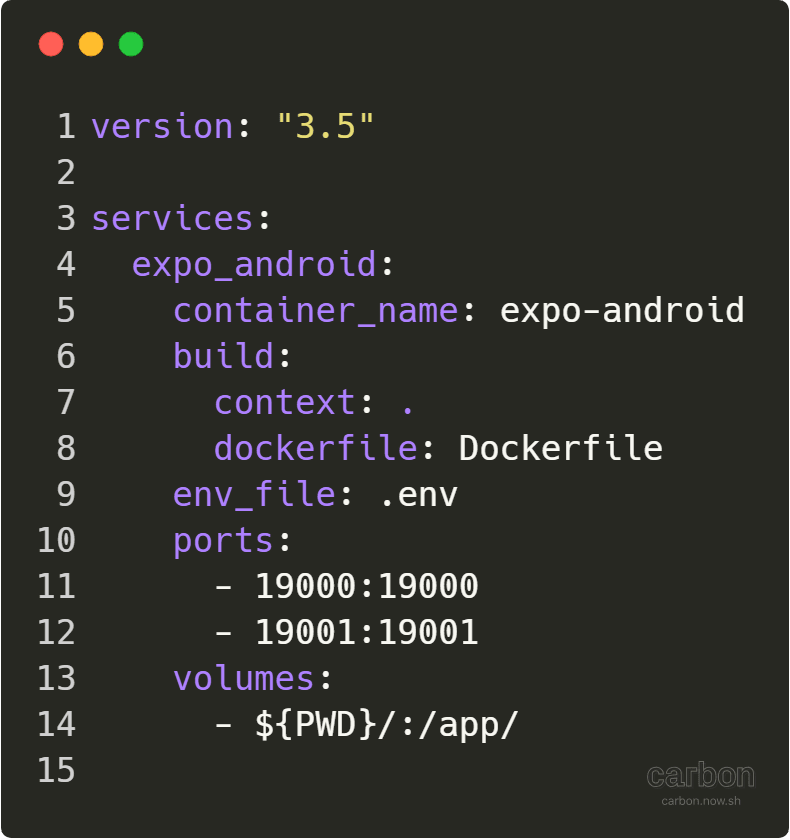 Since expo is being used to build mobile phone applications Docker isn’t going to be used in production. I prefer to use docker-compose to do the building and running, it means I can run one simple command and do the building and running in one step. Quick aside docker-compose is great for development, especially when you need to run multiple Docker container, but is not really built to be used in production. Look at using a container orchestration tool such as Kubernetes.

Thanks for keeping DEV Community 👩‍💻👨‍💻 safe. Here is what you can do to flag ghost: