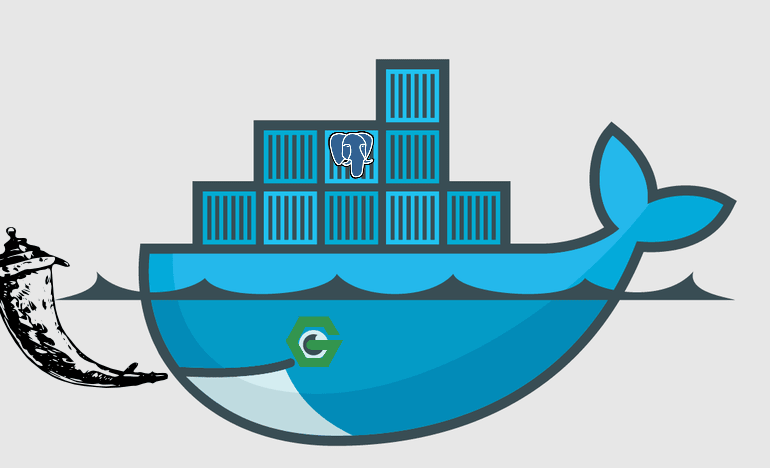 Docker with Nginx, Flask and Postgres

Docker 🐳 is a relatively new and exciting technology, Docker is a containerisation tool. The main benefits of using Docker is that you can use the same environment for development, testing and production. Since Docker environments are consistent this means if the application works in the testing environment it will also work in production.

Another big advantage of Docker is that I don’t need to download all the dependencies on my own machine directly. To build an entire application and run it all I need is a dockerfile so if I’m the go a lot and using lots of different machines, I can easily set up my own development environment simply by using Docker. All Docker does it execute a set of instructions so since the instructions are the same, the environment Docker will create (Docker container) will also be the same.

In this tutorial, I will show you how to set up a Python 🐍 application using multiple Docker containers. In theory, you could have one big Docker container that has Nginx, Flask and Postgres but I prefer to split the application up. For example into its core components, web server (Nginx), application (Flask) and database (Postgres). The main advantage of this is that it makes it easier to replace components of the application is required and also if an error occurs easier to see which component is causing the error.

Note : Everything in this tutorial has been tested on Ubuntu Linux.

The first Docker container called Nginx will be the main gateway into our application it will be used as a proxy server. It will receive HTTP requests and forward them onto our Python application.

This is a very simple dockerfile that takes uses the latest Nginx docker image. It then removes the default configuration and adds our configuration. 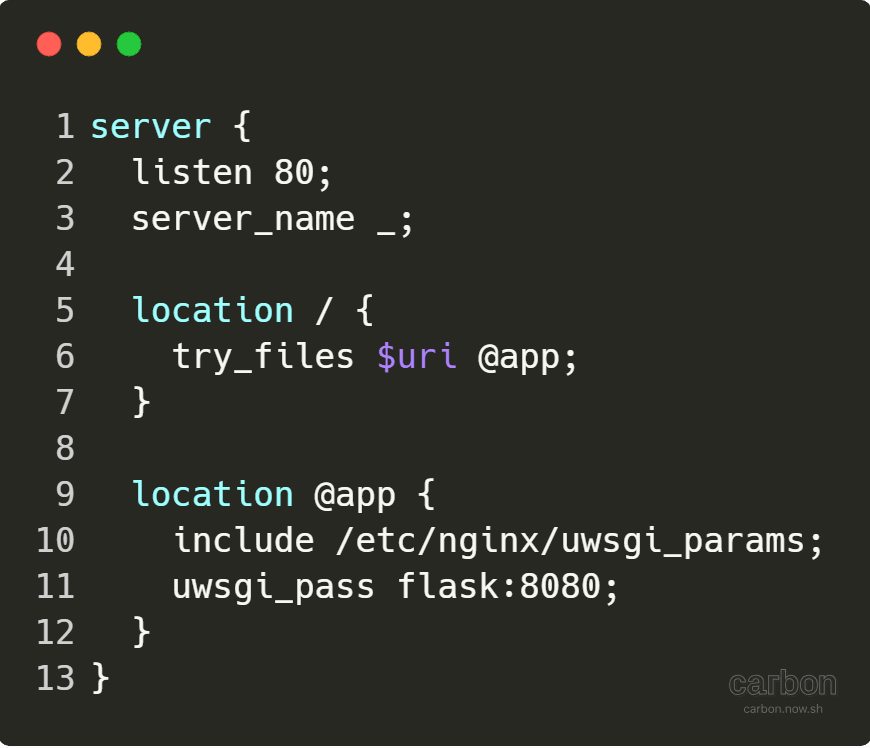 This is a simple Nginx configuration file which listens for traffic on port 80 (HTTP). It then passes on the data to uWSGI (hence location /). We then pass the HTTP request to another Docker container called flask on port 8080. This configuration cannot be used for https. Warning Only use https to send secure data. The reason we give it the container name flask rather than localhost is because this is how Docker networking works by default (bridge networking) to allow container to container communication. We do a something thing to allow when connecting Flask container to the Postgres container.

NOTE: Link to the Python app source code in source_code/src/example/ this is the code that is turned into the tar in the dist folder.

The second Docker container will contain our Python application running on a uWSGI server. The uWSGI server is a web application server based on the WSGI specification will allow Python to communicate with web servers. In this case, it essentially acts as middleware between Nginx and Flask translating requests between them. So essentially uWSGI receives an HTTP request from Nginx and translates into something Flask can understand. This container stores all the core Python code required for this simple API. 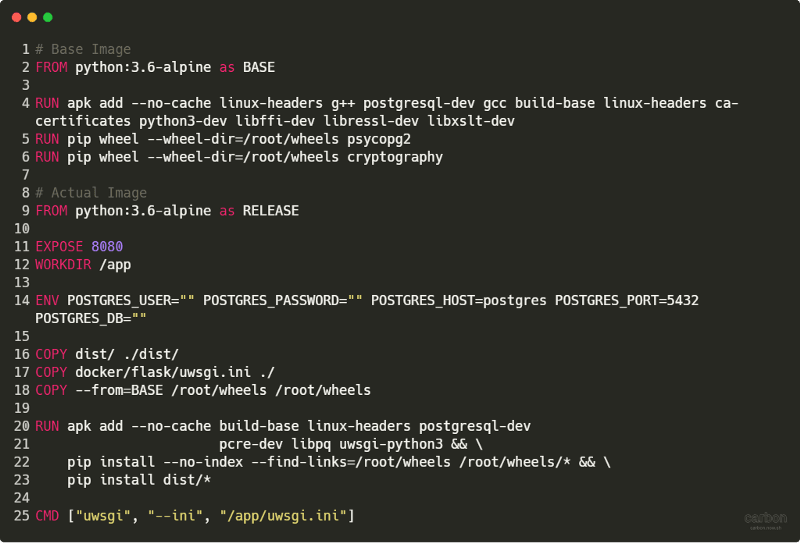 This dockerfile uses a relatively new Docker feature called multi-stage builds. Here we use a base image (Python3.6) to generate some Python wheel files. These wheel files require specific Linux dependencies that we don’t actually need in our main Docker container. Then we define our actual image and copy over the wheel files that we need for our application. This is done to help reduce the size of our Docker image file, we want to try to make the image as possible (as much as it makes sense). At the end of the dockerfile, the BASE image is destroyed.

So our actual Docker image is a bit more interesting. It does the following;

In theory, you could simply copy and install the requirements.txt and copy all the source code to the /app folder. However, I prefer to generate and install the actual Python package I think it's cleaner and you only have to copy a single tar file. However, this does require you to run the command to generate the dist folder before you try to build the Docker image. 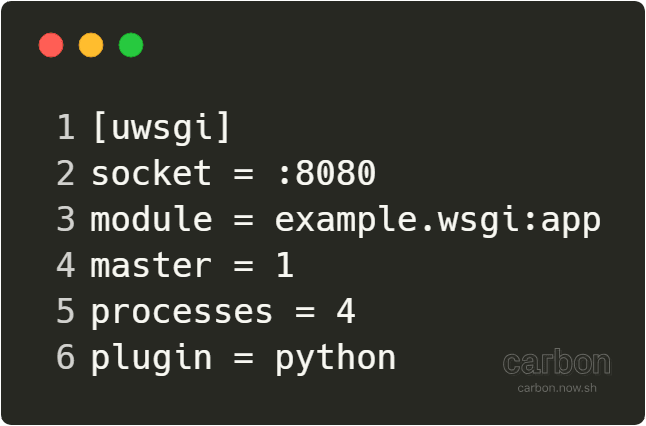 This is the configuration file used by the uWSGI server. This is where we define which port uWSGI listens for traffic on in this cases it’s 8080. Note that since we’ve defined socket you cannot access the uWSGI server directly you need a web server in front of it, if you wanted to use just uWSGI you would change this option to http. The other import option is the module, we point it to our installed module example then the wsgi module and app variable. Hence the module=example.wsgi:app. In this example the wsgi.py module calls create_app() function which creates the Flask app. 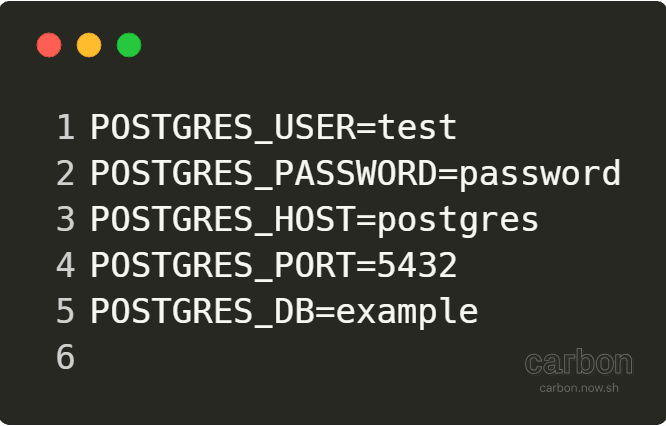 The environment variables passed look something like this. NOTE You don’t need to pass the port or the host to Postgres Docker container. These are used by the Flask container.

So we’ve defined our dockerfile and configuration files used by those dockerfiles but how do we actually use Docker. One way we can use docker is to define it using docker-compose. Here we define a set of services and Docker will automatically run and build those services and handle the networking for us. I personally use docker-compose for development as it saves a lot of time running the docker build and docker run commands for each Docker image/container. 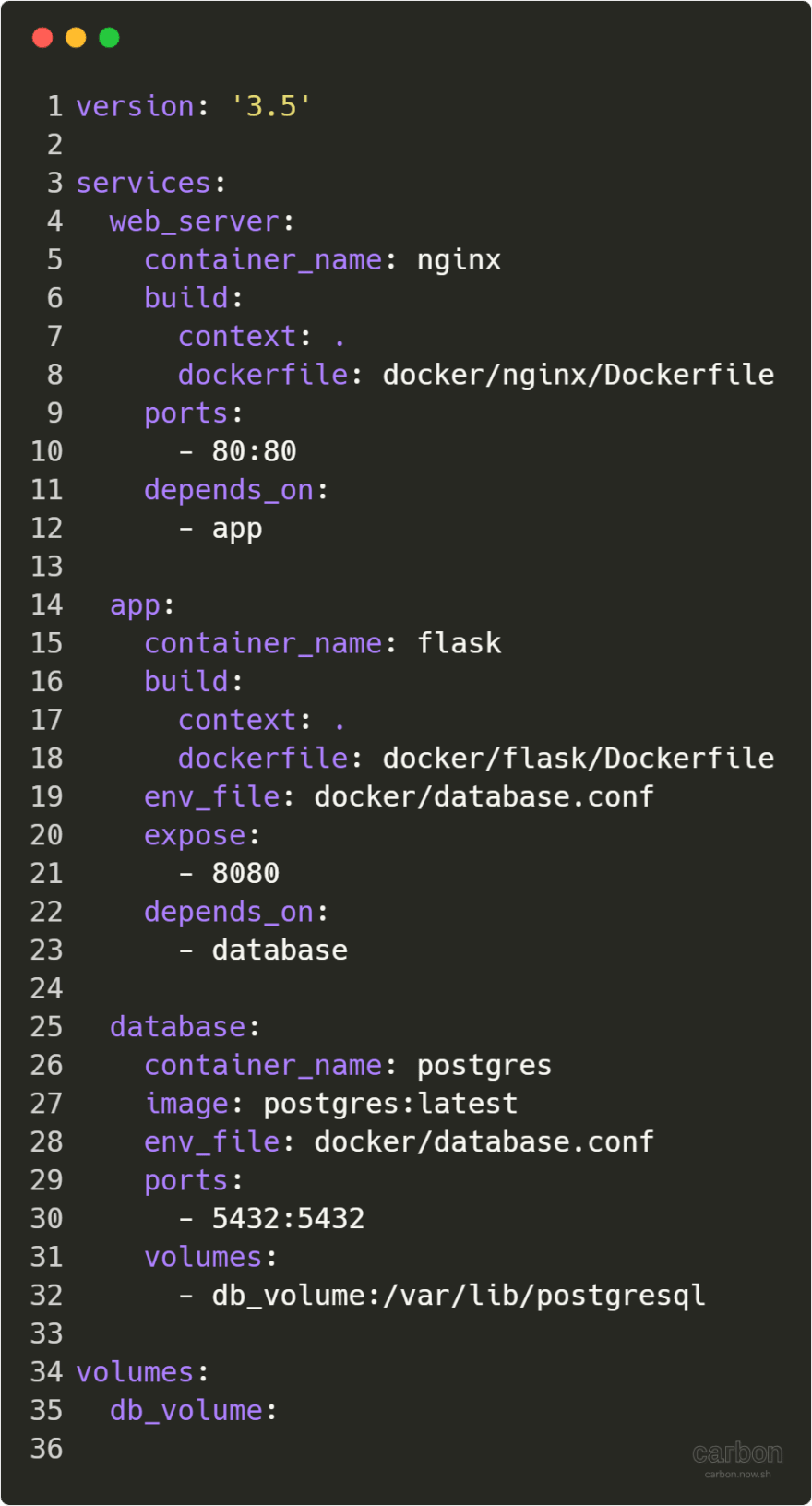 So at the top of the file we define the version number of docker-compose, it is recommended that users use version 3 now. Then we define our services, one service equals one Docker container. Each service is given a name, such as web_server, app and database.

This service runs our Nginx server. We call the container nginx for obvious reasons. We pass it the location of the dockerfile to build. The build context: . simply means relative to this current working directory so we when we COPY file we will copy them relative to docker-compose.yml file. The final thing we do publish our ports so all traffic on the host machine on port 80 is mapped to the Docker container also on port 80. We could use any port on our guest machine say we used 8001, then we would access the web server by going to localhost:8001. The final part specifies this container depends on the app container so app will be run before this container.

This is a relatively simple service, again we point it to our flask dockerfile and set build context to the current folder. Then we pass some environment variables as a file, the variables are taken from this file (same database.conf as defined above). These variables are used to allow Python to connect to the database. Finally, we expose port 8080, again this for documentation purposes so other users know this container expects traffic on port 8080. Since we need to connect to the database when we set up our app we depend on the database container being run first.

This service doesn’t have its own dockerfile but instead uses the official Postgres image. It then passes some environment variables as a file, the same file that gets passed to Flask container. We don’t actually need the host or port variables but it’s easier to maintain a single file in this case. We then map the host port 5432 to the guest Docker container port 5432. This is the port that Postgres listens on. Like with Nginx you can set the host port to whatever you want, but make sure you change this in database.conf and update POSTGRES_PORT variable. Finally, we mount a volume so that data is persistent, without this when the database Docker container was killed you would lose all your data. By mounting db_volume even you kill the container to say update the Postgres image your data will persist.

To actually run the docker-compose file (in the same folder as docker-compose.yml), you can do something like below. Where -d means it runs in the background. This will build all three services and once it has built our Docker images it will run those Docker images as Docker containers.

One important thing to note is docker-compose should not really be used in production for several reasons, such as downtime when updating your Docker containers. If your deploying to only 1 host docker-compose should be fine but in reality, most applications required high availability and zero downtime updates, in this case, you should at using a container orchestration tools such as Kuberenetes. So an alternative approach is to build and run each Docker container yourself, the equivalent commands for this docker-compose.yml file would be.

Note : After you’ve built your own images you can push them to either a public or private Docker registry so you or other people can access them. This is a common way to access your images during your CI pipeline. In fact base images like postgres:latest are taken from the official Docker registry.

Permission denied to create extension "extension_name" HINT: Must be superuser to create this extension postgres

Thanks for keeping DEV Community safe. Here is what you can do to flag ghost: