Recently I changed my setup from macOS to Windows, and I’d like to do some experiments with GameDev in Windows. So one of the first things that I did was try to set up my dev environment and test some SDL2 code.

This is a simple guide to how to setup SDL2 with Visual Studio Code and mingw64, for me worked and I hope that you can start with SDL2 in Windows.

The first thing that we need to install is Visual Studio Code editor. Download, install, and launch VS Code.

You need to install the C/C++ plugin from Microsoft.

Now, you need to install mingw64 to use the compilers that are included like g++, if you want to use the Visual Studio compiler, you can change some of the settings here but for now we continue with mingw64.

For easy installation, use the MinGW-W64 Online Installer, take note of the path where you installed your compiler, because we’re going to need it in the configuration.

Now, we need to download SDL2. For our case, we have to download the Development libraries for MinGW

And download the Runtime libraries to run our games.

Now we are ready to start our SDL2 project. Create a folder for your project and open it with VSCode. Inside the folder, create another called src , here is where are going to save our code files. For our SDL2 and C++ configuration, create a .vscode folder. For the output of our compilation, create a build folder. Your editor should be like this 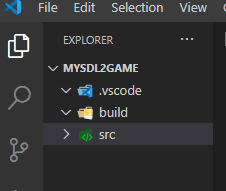 The first thing that we need to create is our Task to compile our code. In the .vscode ** folder, create a new file and name it **tasks.json. Inside the file, write the following configuration.

label option is the name in which we are going to identify our task.

In the command option, we need to put the path to our g++ installation, that is where we install mingw64.

In the args options, we have some arguments that are important to notice. For example, "build\\game.exe", is the name of our game and the folder where we’re going to save it.

"-lmingw32" is an option to compile with the mingw libraries, besides that said 32, we’re are using the 64 bits compiler. "-lSDL2main",
"-lSDL2",
"-mwindows" in this case, we are indicating to our compiler that we need to include the SDL2main and SDL2 libraries and we don’t want the command prompt when launching our game.

Now, we need to create a launch.json file to launch our game and debugging.

"program": "${workspaceFolder}\\build\\game.exe", is the executable that we are going to launch, in our case is the same that our game.

"preLaunchTask": "SDL2" before launch our program, we need to run the task “SDL2”, this is the name that we put in the label option in tasks.json.

Now, as the last configuration step, we need to configure our C++ options to have a better Intellisense autocomplete and configuration of our compiler. 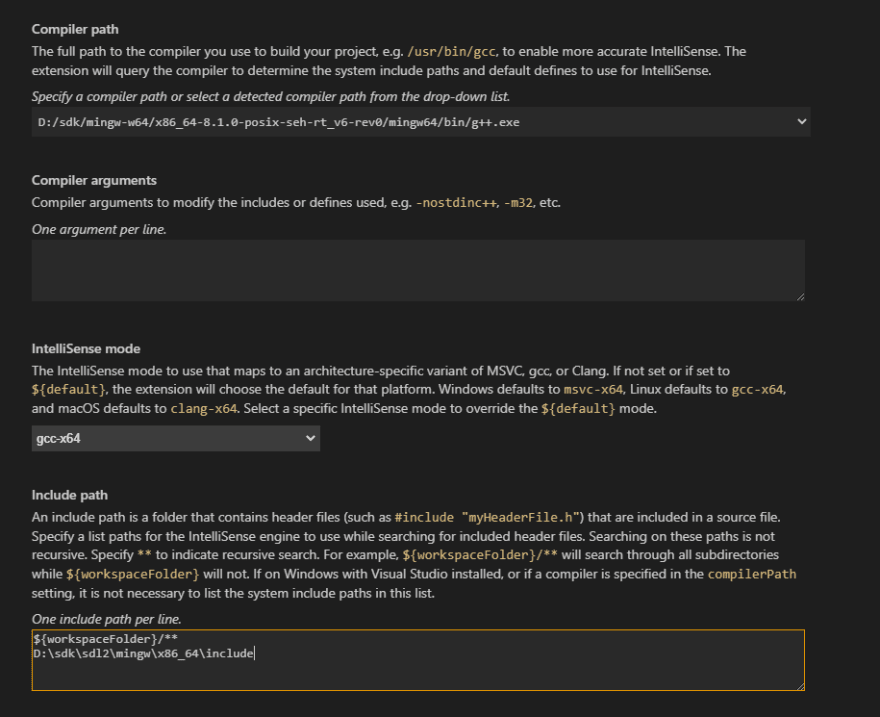 Other options that you may change are C Standard and C++ Standard, ** If you save these configurations, you are going to have a file named **c_cpp_properties.json in your .vscode folder.

Now, you need to put the SDL2.dll file in the build folder, to be able to run our SDL2 game.

Remember to use the version of your game

Create a main.cpp file in the *src * folder to test our environment, and write the next code

Press *F5 * and cross your fingers. You should watch a red window, is you see it, then you are ready to work with SDL2 and VS Code! 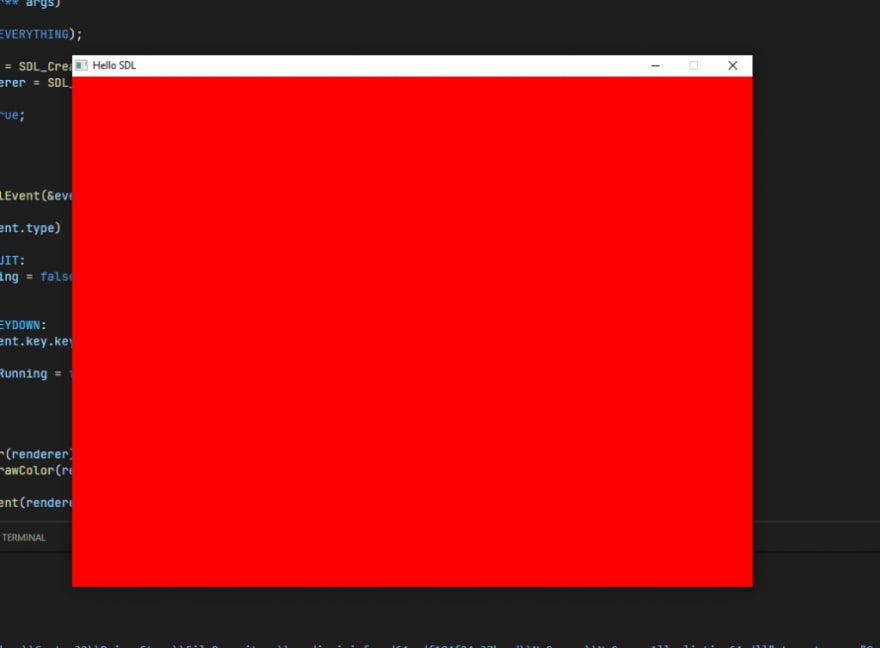 This is a simple configuration for start with SDL2, if you want to use SDL_image, you should do the same steps to add the headers and libraries. I will continue with SDL2 and check if with this configuration can be have some problems, but for now, you are able to start working with SDL2.

How to add a custom font to an HTML canvas

Visualizing Chaos Theory in Javascript with Codesphere and p5.JS