Hi there, GitHub developer! So you host your code on GitHub, and you've seen some comments like this:

Dependabot and thousands of bots like it are what are called GitHub Apps. Today, I'll teach you how to make a GitHub App and how to list it for purchase in GitHub Marketplace. GitHub Apps have been around for several years but are worth another look as the GitHub Platform expands and improves.

GitHub Apps are a great way to programmatically interact with GitHub:

GitHub Apps replace OAuth apps, are used to build GitHub Actions, and work on GitHub.com and GitHub Enterprise alike. Some APIs are exclusive to GitHub Apps – for example, Checks and Content Attachments.

A GitHub App can be programmed to act as itself, as a (scoped) "installation", or as one of its users, if permitted.

Also, GitHub Apps fit together with GitHub Actions like peanut butter and jelly, which is rad. So let's build one! Today, I'll build the simplest thing possible, a bot that approves a pull request if "🤖" is in the title.

What will you build 👀?

Know JavaScript? Great. Probot is a trusty Node.js framework for building GitHub Apps, and we'll use it to make the following steps easier:

In a terminal with Node.js installed, type npx create-probot-app pr-bot and follow the prompts, choosing basic-js as the template. cd pr-bot when the installation is done.

Open up app.yml in your favorite text editor. This is a one-time use creation spec or "manifest" – of course, App settings can be changed later at https://github.com/settings/apps.

Uncomment default_events.pull_request and change default_permissions.pull_requests to write. When you're done it should look like this:

Now add the logic of the App in index.js. Add this block just below the line, app.log.info("Yay, the app was loaded!"):

context.octokit gives us access to an authenticated octokit/rest.js client to make GitHub API calls with ease. (Psst: check out the other official and 3rd party Octokit libraries, even if you aren't using Probot!)

Back in your terminal, run npm run start and then click "Register GitHub App" at http://localhost:3000: 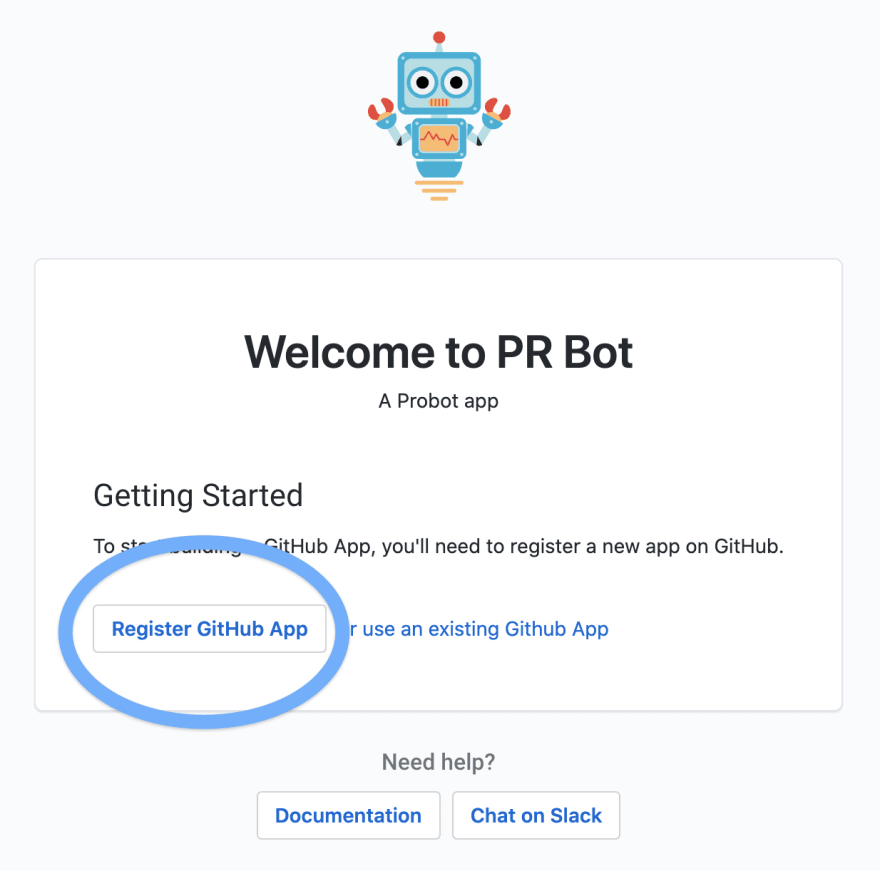 Follow the prompts to finish creating the app. Notice that an .env file has appeared with some secret data only you as App developer have, namely the APP_ID, PRIVATE_KEY, and WEBHOOK_SECRET.

Follow the prompts to install the app on all or select repositories. This lets the App "see and respond" to the resources you configured before (pull_requests), but in only these repositories.

In one of these repositories, open a pull request. The pull_request webhook was received, but no "🤖" was in the title, so pr-bot stayed quiet! Now add a "🤖" in the title and notice the approval!

But you're not going to use your own machine for long 😉. Probot apps are just Node.js apps, so they can be deployed to all the environments you'd expect.

No Probot, no problem

So far we've used Probot as a helper framework to create, install, and use the app to extend our experience on GitHub! Did you know you can easily follow this pattern even without Probot?

Head over to https://github.com/settings/apps/new and fill out the fields, with Creating a GitHub App - GitHub Docs as your guide. Now you can appreciate the complexity that Probot solves by utilizing the app manifest flow behind the scenes. 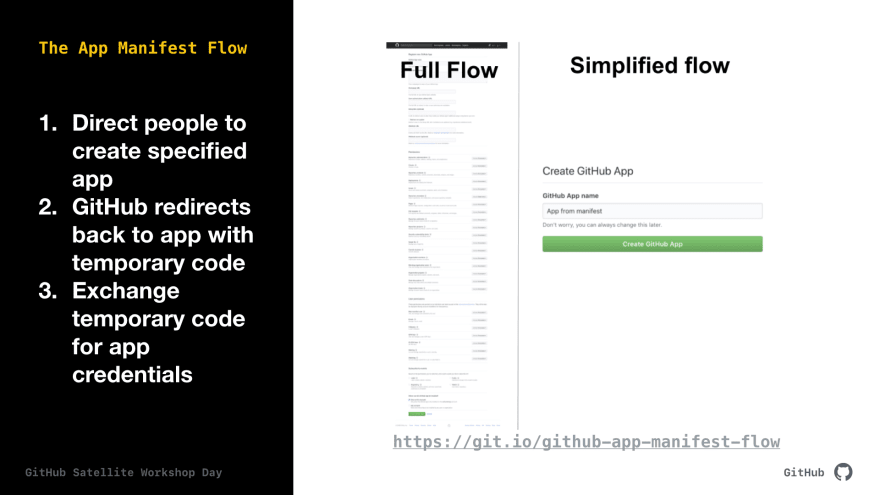 Visit your App's page at https://github.com/apps/yourappname to start an installation process as before.

Check out this video for a walkthrough example using Go on GitHub Enterprise Server:

GitHub Marketplace is a one stop shop for sharing your app with the GitHub community and even allowing developers to pay you for it. See Requirements for listing an app - GitHub Docs for instructions!

Today, we created, installed, and used a simple GitHub App and highlighted some great features about GitHub Apps:

Happy developing! See you around!

Setup Cypress & Applitools with GitHub Actions: a comparison of Applitools vs Percy in a mid size app