If you're looking for an RxJS quick start then this article is not for you!

Here I will be tackling Reactive Programming with the goal of shedding some light on its theory using RxJS as the example.

I will be explaining the core Reactive Programming concepts, relating them to RxJS and how they work in practice. Hopefully, by the end of the read, you'll have a truer understanding of RxJS and be able to pick up any Rx Implementation and immediately start coding. Let's get started!

RxJS is an API for asynchronous programming
with observable streams.

To understand what this means we need to define what is meant by asynchronous programming and what observable streams are. The best place to start? Reactive Programming!

Asynchronous Programming is a means of parallel programming in which a unit of work runs separately from the main application thread. Generally, this is achieved via a messaging system where threads of execution competing for a shared resource don’t need to wait by blocking (preventing the thread of execution from performing other work until current work is done), and can as such perform other useful work while the resource is occupied. This concept is vital for Reactive Programming because it allows for non-blocking code to be written. Bellow a visualisation of the process: 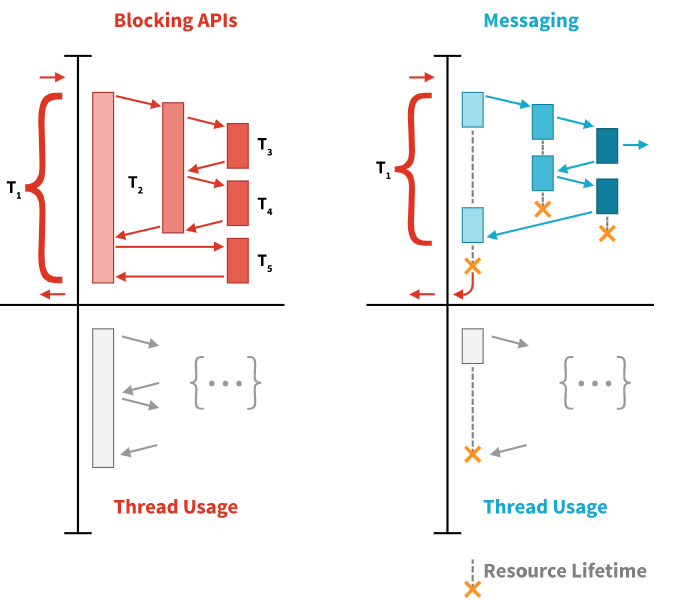 Reactive Programming is generally Event-driven. Events are simply undirected messages. At their core, they are (for all intents and purposes) an extension of an event.

The Application Program Interface (API) for Reactive Programming libraries are generally either:

The Reactive Manifesto defines that reactive systems are:

How do these two relate? In summary:

Reactive Programming should be used as one of the tools to construct a Reactive System.

Defining the Paradigm in Practice

Right, so, what is exactly is Reactive Programming? There are many definitions out there... some of which I think not even their authors understand what they mean. In the wise words of @andrestaltz - "Lets cut the bullshit"

Beautiful, concise and above all explainable! In fact, this definition is almost the same as the statement about RxJS I presented before. That is because RxJS is within the Reactive Programming paradigm.

From now on we assume Reactive programming with streams. There are other types of implementations that can also be considered within the paradigm, such as: Promises/Futures and Dataflow variables.

Now, as promised, I'll be showing you guys what is meant by 'asynchronous data streams'.

The key idea in Reactive Programming is that everything (for the most part) can be a stream. Streams are cheap and ubiquitous.

A stream is a sequence of ongoing events ordered in time. It can only emit 3 things: a data typed value, an error, or a termination signal.

This definition is important to remember since it remains the same no matter the implementation of the paradigm.

The way I like to think about streams is by visualising a water pipe with a closing mechanism where each water molecule (or set of) is an emitted value.

The closing mechanism can be triggered manually by turning the tap, representing a termination signal, or implicitly, if the pipe fails to do its function, representing an error. A closed pipe can no longer push out water and we call it as a completed stream.

Now, let us focus on the first sentence of our definition: 'A stream is a sequence of ongoing events ordered in time.' 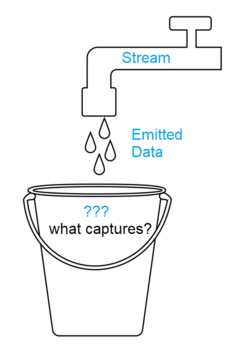 In other words, water droplets (data) are being pushed out of the pipe (stream) as time (program execution) passes. How do we capture these droplets to act on them?

In most implementations of Reactive Programming, we capture these emitted events only asynchronously, by defining functions that are called and passed one of the three appropriate outputs as a parameter:

That covers capturing. It's time to move into the manipulation of streams themselves. We do this via Operators.

Operators offer a way to manipulate streams by transforming them. A transformation, in our context, is simply a function f that maps a stream into another stream, i.e. f: S1 → S2 This function we call an operator.

To visualise this simple imagine placing one or more appliances within the pipeline of our stream. These appliances could have filters in them or could modify the contents of the water (or other transformations) thereby transforming our stream into a new stream.

To explain operators and their effects on real streams of data we will have to dive into the world of Marble Diagrams.

Before explaining marble diagrams we need to improve our terminology a little bit.

Now, because we will be dealing with ReactiveX in the next chapter, it's time to introduce some of the required terminologies. Don't worry, for now, I will only be giving abstracted definitions to a few terms that map to terms I've already covered. Below, the same diagrams as before, but with the new terminology included.

and for the operator diagram, 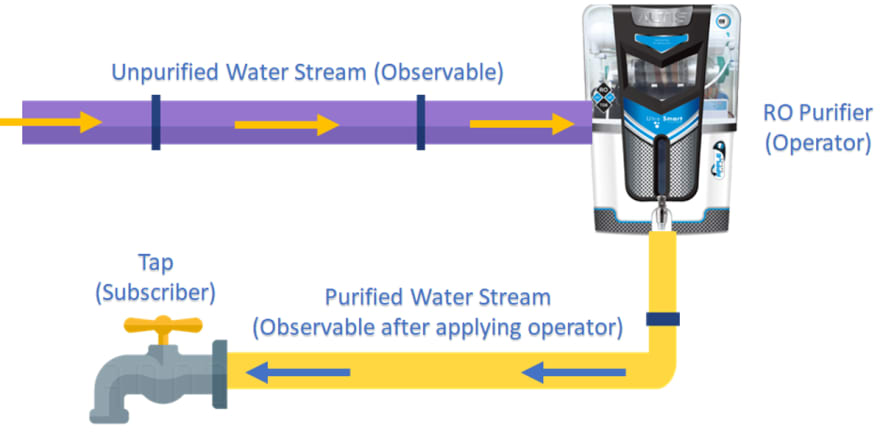 We will be returning to more precise definitions later, since they are pretty much required to read any sort of RX documentation without inducing a headache. So don't worry if you don't quite understand what these mean yet.

However, we will be using this new terminology from now on so I recommend keep the term mapping in your head.

Learning Reactive Programming can be a daunting task so the Rx team came up with the concept of marble diagrams to help with visualising observables and their operators. These diagrams are incredibly intuitive and are commonly found in any Rx Operator documentation. They allow for easy understanding of the operators without having to read much else. Good alternative to a chunky wall of text filled with terminology! I'll try to explain how to read them as best I can: 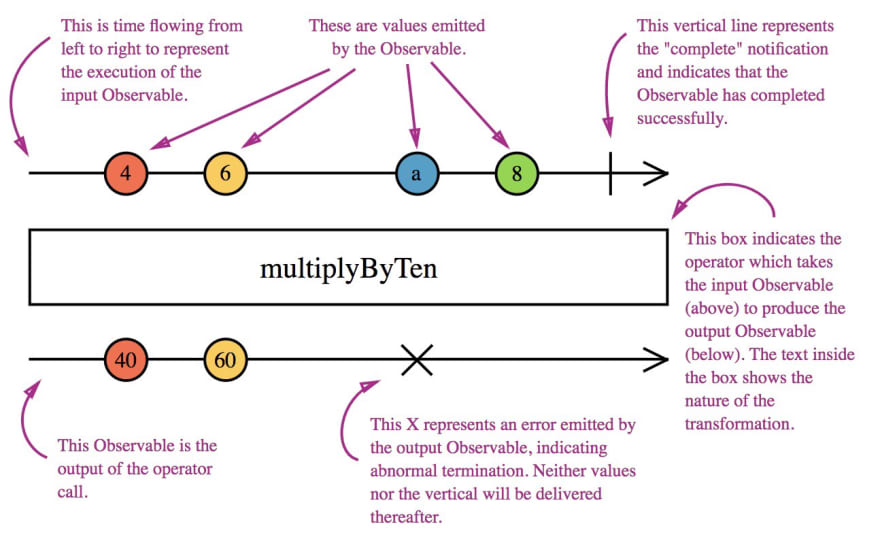 Overview of a Marble Diagram

Marble diagrams describe observables. Observables are streams of values through time. So, we need a time axis!

Now that we have a time axis we need to represent our observable outputs. If you recall our earlier definition, an observable can only output a value, a termination signal or an error.

Let's start with the easy one, the termination signal:

In similar fashion, we have our error output:

There can be multiple values across the time axis as long as there is no termination or error output behind them as those will unsubscribe from the observable.

Done, simple right? On to the next part: operators in marble diagrams!

As previously mentioned, operators are functions that transform observables. That means they take as input one or more observables and output a new observable. We can represent them in a marble diagram like so:

Marble diagram of a filter operator

The block in between is our operator function, taking in an observable and returning another. So, our function is filtering the input observable by taking the modulus 2 to determine whether a pushed value is even and if it is it allows that push value to pass through, essentially, filtering the stream.

As mentioned before, operators can have more than one observable as input, such is the case for operators such as switchMap

The switchMap operator is a very popular one that has a handful of practical applications. It is generally used to implement a discard action between the input streams which can save a lot of trouble and computation in practice.

RxJS is a library extending ReactiveX for composing asynchronous and event-based programs by using observable sequences with JavaScript. It provides one core type, the Observable, satellite types (Observer, Schedulers, Subjects) and operators (map, filter, reduce, every, etc) to allow the manipulation of the observable streams with easy and significantly reducing the amount of code needed to solve asynchronous problems.

In RxJS some arguably established definitions are:

By now we should agree that observables are simply structures that lazy push collections of multiple values. Subscriptions are the resulting structure representing a disposable resource, usually the execution of an Observable.

Heres how we code them in RxJS:

Notice how we never see the value 3 logged because we cancel our subscription before it is emitted through the closure function passed to setTimeout.

However, this does not mean the value was not emitted, it was, we just don't see it because we stopped subscribing. The stream was not terminated via the act of unsubscribing.

A cold observable starts producing data when some code invokes a subscribe() function on it.

A hot observable produces data even if no subscribers are interested in the data.

The main differences are:

Observables can be Promises

Although observables are not an extension of the Promise/A+ specification, RxJS still provides means to transform an observable into a true Promise. An example follows:

With the use of RxJS's toPromise method, any observable can be converted to a promise. Note that because it returns a true JS Promise, toPromise is not a pipable operator, as it does not return an observable.

In practice, an Observer is a consumer of values delivered by an Observable. Observers are simply a set of callbacks, one for each type of notification delivered by the Observable: next, error, and complete. The following is an example of a typical Observer object:

That's it for observers, really!

RxJS is mostly useful for its operators, even though the Observable is the foundation. Previously we studied operators as functions that transformed streams. Nothing changes here, just terminology!

RxJS has a (very) vast library of operators. We will only be touching on a few simple ones to cover what we've talked about already:

If you remember our filter example from before this should be fairly simple to understand!

A pipeline is simply a series of operators that get executed in order. Something obvious but that people forget, every pipeline operator must return an observable.

The same exmaple as before but with chaining operators:

There are a ton more operators that do vastly different things in categories such as: Creation, Filtering, Combination, Error Handling, Transformation, Multicasting, etc. I encourage you to try a few from each of the categories out. This is the power of RxJS, there's a lot already done for you!

A Subject is like an Observable, but can multicast to many Observers. Subjects are like EventEmitters: they maintain a registry of many listeners. In fact, part of a subject is literally an observable and you can get a reference to that observable.

The easiest way to think of a subject is quite literally:

IMO, the best use case for Subjects is when the code it is referenced in is the one that is producing the observable data. You can easily let your consumers subscribe to the Subject and then call the .next() function to push data into the pipeline. Be wary of overusing them since most problems are solvable with only data transformation and Observables.

Finally, schedulers! They might seem hard to understand but are quite simple at a surface level which is more than enough for us to know about. In essence, schedulers control the order of tasks for Observables. There are only a few of them and they won't be changing anytime soon, here they are:

Table of the types of schedulers

You can use schedulers by passing them to observables through a handful of operators (usually of the creation category) as arguments. The most basic example, forcing a synchronous observable to behave asynchronously:

Notice how the notifications got value... were delivered after just after subscription. This is because observeOn(asyncScheduler) introduces a proxy Observer between the new Observable and the final Observer.

Other schedulers can be used for different timings. We are done!