In this article we shall make the national flag of India (the tricolour). As an aside and fun fact, a number of other countries have national flags featuring 3 colours and the Indian flag actually has 4 colours. 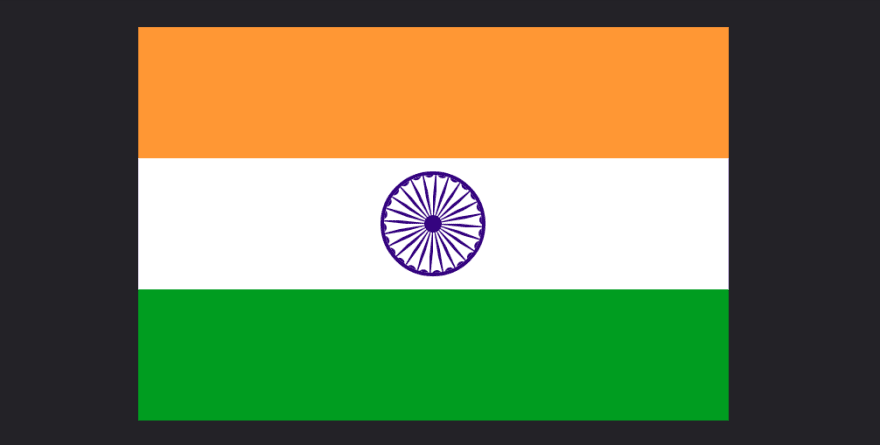 So let's start with defining the colours as defined in the Flag Code of India which contains the specifications for the Indian national flag.

The flag will, of course, have 3 rectangular sections for the saffron, white and green parts and the white section will have the wheel of Ashoka in the center. The wheel will have a small inner circle at the center and 24 spokes. So, let's write down that structure in Pug.

The structure is simple enough. We have a div with class flag as the container for the flag sections. This div contains the saffron, white and green sections (which are also divs with relevant classes. The white section contains a div with class wheel and the wheel contains a div with class wheel-center (this will be the smaller circle at the center of the wheel) and 24 divs with class spoke (these will be the 24 spokes). We have generated the 24 spokes using a while loop. Pug supports 2 mechanisms for iteration; each and while. each is useful when iterating over lists (Javascript arrays) and while is useful when iterating until a certain condition is met. Here we want to iterate 24 times, therefore we use the while loop with a condition. First we define a variable n and set it to 24. Then in each iteration we decrease the value of n by 1 using the decrement operator -- and check if the value has reached 0.

Now that we have the structure of the flag in Pug, let's style it using Less. First, let's set everything to have box-sizing: border-box and set up the body to have a dark background and center its only child, which is the flag div. It's easier to center anything using flexbox. We will set up a mixin to be a flex container that centers its children both horizontally and vertically and apply that mixin on body.

Next let's style the flag div and the 3 coloured sections of the flag. According to the Flag code of India the flag must have a ratio of two-by-three, i.e. the value of width / height must be 1.5 . Here for simplicity we shall use fixed values 675px and 450px for width and height of the flag. This is not responsive, of course. But let's keep things simple.

Also, each of the 3 sections of the flag will have height of 150px and 100% width. The white section will have a additional padding of 15px and it will center its children (its only child will be the wheel).

Now that we have the sections, let's style the wheel of Ashoka. As the height of the white section is 150px and we have a padding of 15px on it (on all sides), the available height for the wheel is 120px. The wheel is a perfect circle, therefore its width will also be 120px and it will have a border-radius of 60px or 50%. We will also set its position to be relative, so that when we set position: absolute on the spokes, they will position themselves with respect to the wheel div instead of the body. The wheel will have a blue coloured border of 4px width for the rim. It will also center its children using the mixin we defined above.

At the center of the wheel, there will be the wheel-center div. This is a small blue circle of 20px width and height.

Now the only things left to style are the spokes. The problem is, there are 24 of them and if we try to style them all individually, it will be complete mess. That's where the less mixins come to our aid, we can define
a mixin that can apply itself recursively for a specified number of times. Using such a mixin, we can generate the repeating parts of the css rulesets for the 24 spokes.

Each spoke has the same properties, except for the rotation. Because the whleel is 360 degrees and there are 24 spokes, difference between any two adjacent spokes must be 15 degrees. That is, each spoke must have a rotation value 15 degrees higher than its previous spoke.

The wheel has a dimension of 120px with 4px border. Therefore the available space inside the wheel has dimension of 112px and its center must lie at (56px, 56px). We will position the spokes at top: 56px; left: 56px to have the top-left corner of the spokes at the center of the wheel. Now we can play around with the width, height and skew them a bit to get the desired shape for the spokes. After a few tries, I found that width: 31px; height: 4px; transform: skew(84deg); gives the desired shape of the spoke.

As an additional decorative, we can add the small semi-circular indentations on the rim of the wheel between the spokes. This can be made using an ::after psuedo element for each of the spoke. We can position them absolutely and style them as small circles to get the desired effect.

Here is the pen containing the code we discussed in this post.

So, that's that and we have the national flag of India made using Pug and Less.

JavaScript News and Updates of August 2021

Is it time to let go of Bootstrap?

How to build a Modal