This is the fourth post in the series - CD of Microservices. In the previous post, we talked in depth about CI practices, in particular trunk based deployment and feature toggles. In this post, we’ll discuss environment strategy.

In some organizations people don’t realize the importance of an environment plan until they have too many environments and maintaining them becomes overwhelming.

An environment plan communicates the various environments that are involved in the path to production and their intended uses. It also communicates how your artifacts are promoted and the toggle states on these environments.

You can start with thinking about what environments need to be created upfront and talking about the intended use cases for these environments. Different groups in your organization will have different competing needs. Your environment plan should accommodate the needs from different parties.

CD pipelines generate a lot of artifacts. Before you know it, you're getting into terabytes, or tens of terabytes of generated artifacts. It's important to think through an artifact promotion strategy, which deals with where these artifacts are stored, how many are retained, and how you do clean-up.

The diagram above shows you an environment plan which factors in an artifact promotion strategy. From the plan you can see the environments that exist in the CD pipeline, with different colored arrows depicting different artifact promotion strategies. Early on in this pipeline, we generate artifacts that go to an artifact repository that has a more aggressive clean-up strategy, so we don't really retain too many of those environments. As you go further down this pipeline, artifacts are verified and more robust and you may want to keep these for a little longer, so you could keep them in a store with a different retention policy.

To do this, you need use IaaC techniques to script all aspects of environment provisioning. Here are the benefits of doing this:

Parity with production If you create all environments dynamically based on automation, you will use exactly the same way to create testing and staging environments. The scale and nature of infrastructure may be different, but the footprint of the environment remains the same.

Prevent drift If you have manual processes and manual installations, you can't really ensure that two environments are the same. But using a script to create short-lived dynamic environments prevents drift.

Efficient use of hardware and infrastructure Only creating an environment when you need it and cleaning up dynamically optimizes utilization and saves infrastructure costs.

Technologies such as container schedulers are all the rage these days for deploying and running applications. The diagram below is an example of a Dock - a Docker based build workflow with Kubernetes. 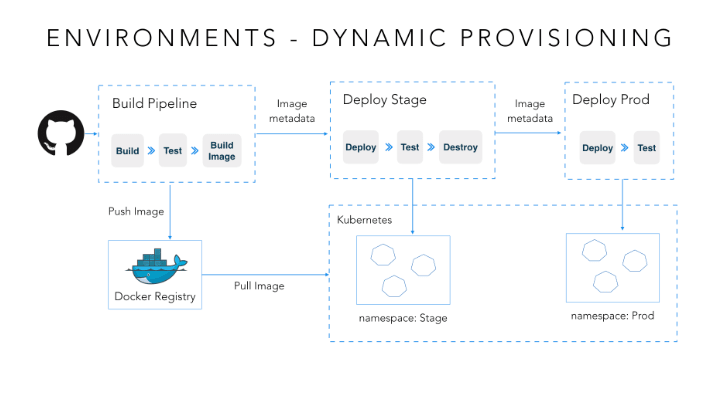 This is the part 4 of our CD of Microservices blog series. We have talked about environment strategy including artifact promotion and leveraging modern infrastructure for dynamic environments. In the next post, we will talk about the fourth consideration: configuration strategy.

Use Docker to build better CI/CD pipelines with Dagger

How to run Azure CLI with Docker

Looking for a quick way to evaluate GoCD?

Once suspended, gocd will not be able to comment or publish posts until their suspension is removed.

Once unsuspended, gocd will be able to comment and publish posts again.

Once unpublished, all posts by gocd will become hidden and only accessible to themselves.

If gocd is not suspended, they can still re-publish their posts from their dashboard.

Once unpublished, this post will become invisible to the public and only accessible to Sheroy Marker.

Thanks for keeping DEV Community 👩‍💻👨‍💻 safe. Here is what you can do to flag gocd:

Unflagging gocd will restore default visibility to their posts.