Each week over the past month, I have posted before and after code samples calling out ways to clean up code. The response has been amazing, many receiving hundred of likes. While I will continue to share these weekly clean code samples, I wanted to collect the previous ones into a single post. 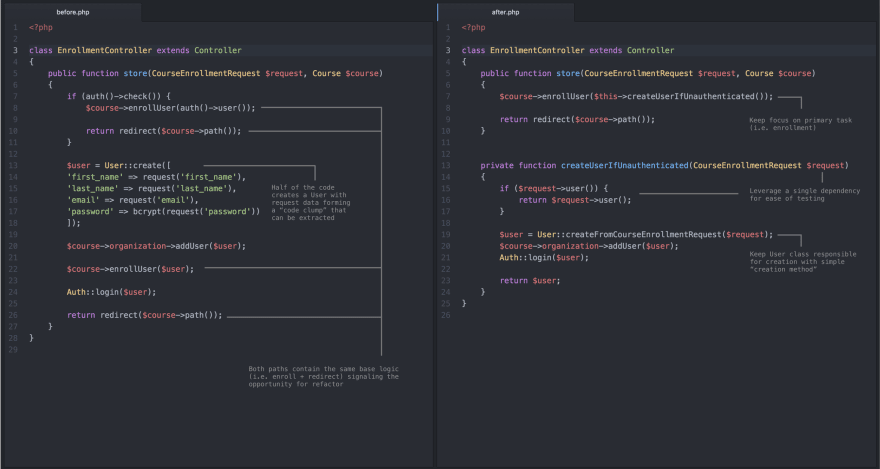 The main question to ask when evaluating a long method is who is responsible for this section of code? The answer to this question will help determine if the code can be moved elsewhere. In this case, the creation of the user could be moved to the model. We could also streamline the two paths by creating a private, conditional method. This method performs the branched logic of creating the user when necessary.

The result is a much smaller method. Some may argue we've simply moved the code. Nevertheless, the intent of our original method is more concise and its component parts are easy to follow. Both improve communicates - which is the measurement of clean code.

As pointed out on Twitter, the after code did have some mistakes, such as missing parameters to createUserIfUnauthenticated. However, these are trivial mistakes which do not change the clean up.

A before and after of a code snippet submitted earlier. Tried to highlight key areas (@steveschoger style) to ident… twitter.com/i/web/status/9…

To clean this code, the strategy is to leverage other objects to handle all the things. A Laravel Form Request object could be used for the validation. We could adopt the Repository Pattern to introduce an object to coordinate the storage of an image.

Similar to before, the result is a smaller method. What's different in this case is leveraging existing objects available in the framework. We also applied a pattern that fit our code. Too often developers do this in reverse - fitting the code to a pattern. Letting a pattern emerge from the code is a far cleaner approach.

Another "clean up" from last week on how you can reduce long methods by introducing objects to encapsulate related… twitter.com/i/web/status/9…

The third tweet focused on cleaning up the conditional code that forms most of our codebase. This has been the most popular cleanup so far. Likely because the fundamental code allows it to apply to many languages. 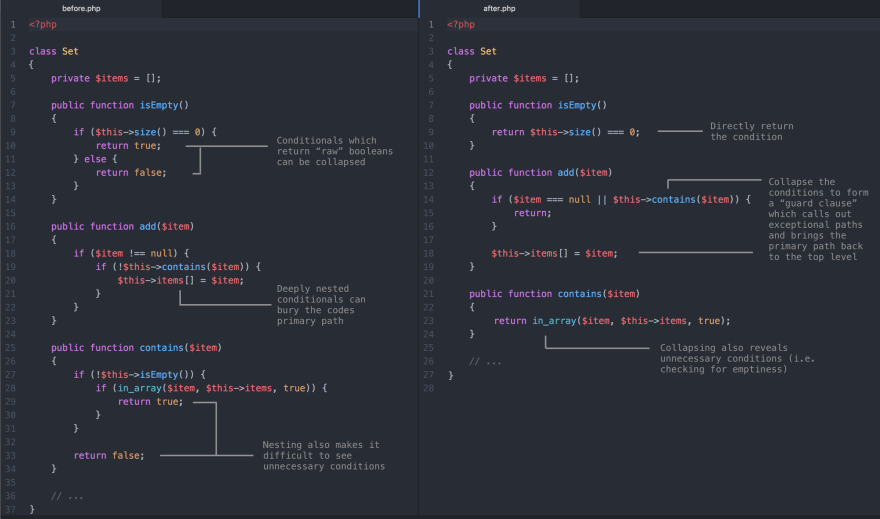 Most of these cleanups fall under the third Writing Clean Code practice - avoid nested code. Anytime you want to clean up conditional code as yourself two questions:

A few ways to clean up the conditional code that forms most of your codebase. From simple to nested to spotting unn… twitter.com/i/web/status/9…

The fourth tweet focuses on spotting Primitive Obsession. Our obsession with using primitive data types often results in duplication of related code. It's not the exact same code which makes it harder to spot. Over time this code leaks through the system and becomes harder and harder to cleanup.

The tips do not draw out some additional characteristics of these value objects. Almost as important as the encapsulation there provide is the fact that they are immutable. This limits state, making them relatively lightweight to add and even easier to maintain. For more detail and examples on Range, read RangeObject by Martin Fowler.

And yes, I would absolutely refactor limit() to utilize array filtering. This would be the next clean up:

"Primitive Obsession" can make it difficult to spot duplication of related code. You can clean up the code by intro… twitter.com/i/web/status/9…