You don't have to look through too many commit histories on GitHub to see people are pretty terrible about making commits. 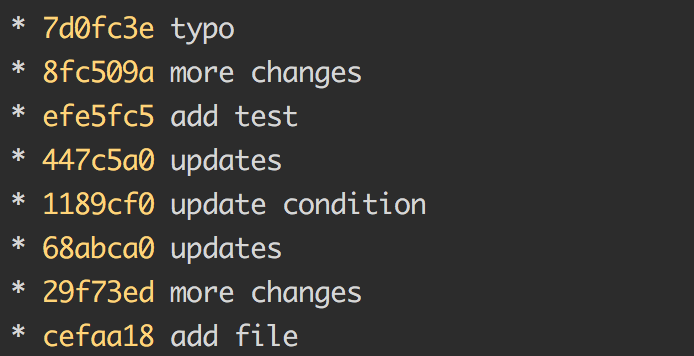 Now I'm not going to talk about writing commit messages. Here's the post on that. I want to talk about the equally important topic of when to make commits.

I get asked this a lot at conferences. Enough to where I made two rules I've continually put to the test.

I make a commit when:

Anytime I satisfy one of these rules, I commit that set of changes. To be clear, I commit only that set of changes. For example, if I had changes I may want to undo and changes that completed a unit of work, I'd make two commits - one containing the changes I may want to undo and one containing the changes that complete the work.

I think the second rule is pretty straightforward. So let's tackle it first. Over the course of time, you'll make some changes you know will be undone. Be it a promotional feature, patch, or other temporary change someday soon you'll want to undo that work.

So back to the first rule.

I think generally most of us follow this rule. However, you don't have to scroll through too many repositories on GitHub to see that we're pretty bad with commits.

The discrepancies come from how we define a unit of work.

Let's start with how not to define a unit of work.

A unit of work is absolutely not based on time. Making commits every X number of minutes, hours, or days is ridiculous and would never result in a version history that provides any value outside of a chronicling system.

Yes, WIP commits are fine. But if they appear in the history of your master branch I'm coming for you!

A unit of work is not based on the type of change. Making commits for new files separate from modified files rarely makes sense. Neither does any other type abstraction: code (e.g. JavaScript vs HTML), layer (e.g. Client vs API), or location (e.g. file system).

So if a unit of work is not based on time or type, then what?

I think it's based by feature. A feature provides more context. Therein making it a far better measurement for a unit of work. Often, implicit in this context are things like time and type, as well as the nature of the change. Said another way, by basing a unit of work by feature will guide you to make commits that tell a story.

So, why not just make the first rule: I make a commit when I complete a feature?

Well, I think this a case where the journey matters. A feature can mean different things, even within the context of the same repository. A feature can also vary in size. With unit of work, you keep the flexibility to control the size of the unit. You just need to know how to measure. I've found by feature gives you the best commit.

Enjoy this post? Check out my comprehensive video series Getting Git.

How to Securely Store Passwords with GPG & PASS

How to Choose the Best Host for Your GitHub Blog