Suppose you don't need to create any custom components in your React Native project, and at the same time, you want your mobile (or web) application to look professional and be user-friendly. In that case, you can use a component library or UI toolkit.

React Native UI toolkit or component library can be really useful during mobile application development. It provides ready-made solutions such as interface elements or APIs and lets us focus on the app's business logic cutting back user interface development time.

A few component libraries on the market currently provide a selection of components, icons, typography, themes, and web support. In this article, I'll tell you a bit about UI libraries. This will give you an overview of them and help you better decide which UI library to use in your project.

Here's the ranking of the 7 most popular React Native UI toolkits and component libraries for 2021. Enjoy!

Let's start with the most popular one - React Native Elements is the most well-known UI kit in this ranking. The numbers don't lie - it has nearly 83 thousand downloads every week. Also, it consists of almost 30 open source UI components made by developers for developers (so it's 100% built by the community).

React Native Elements is very easy to set up - all you need to do is install it via rpm or yarn. It can be built with either pure React Native projects or Expo projects. It works with React Native Vector Icons and can customize app theme using Theme Provider or Composition. Styling components can be done by their custom style props or containerStyle prop. So now you can see why it's so popular, right? 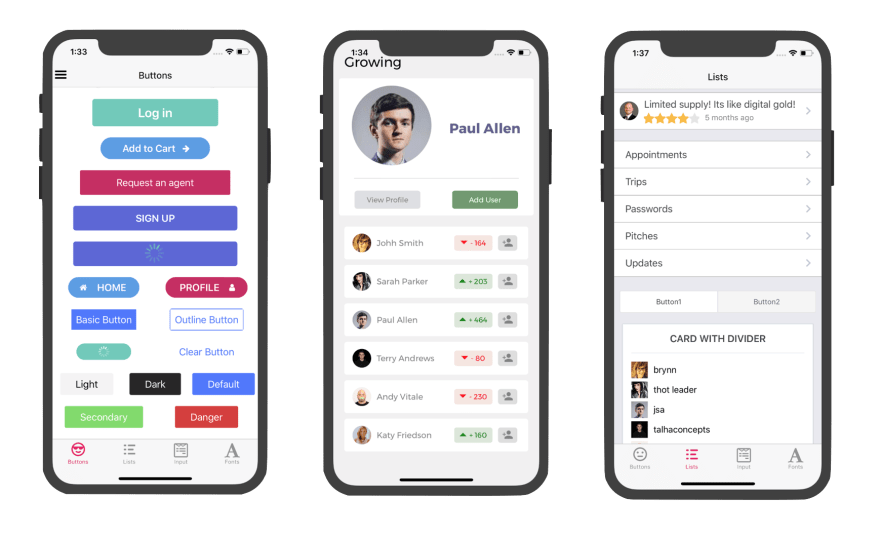 With 55 thousand weekly downloads, React Native Paper is the second most popular React Native UI toolkit and component library. It's an open-source collection of customizable and production-ready components based on Google's Material Design guidelines.

You can learn more about Material Design and other design systems from What is a design system, and do you really need one?

Like in React Native Elements, this one could be used with pure React Native projects and Expo projects. Moreover, it's easy to set up by installing via yarn or npm. With Paper, you can access more than 30 Material Design based components and custom fonts or themes. To support custom themes, Paper exports a Provider component. It's also possible to use combined theming with React Navigation theme at the same time. However, many of the Paper components require React Native Vector Icons, so keep that in mind. 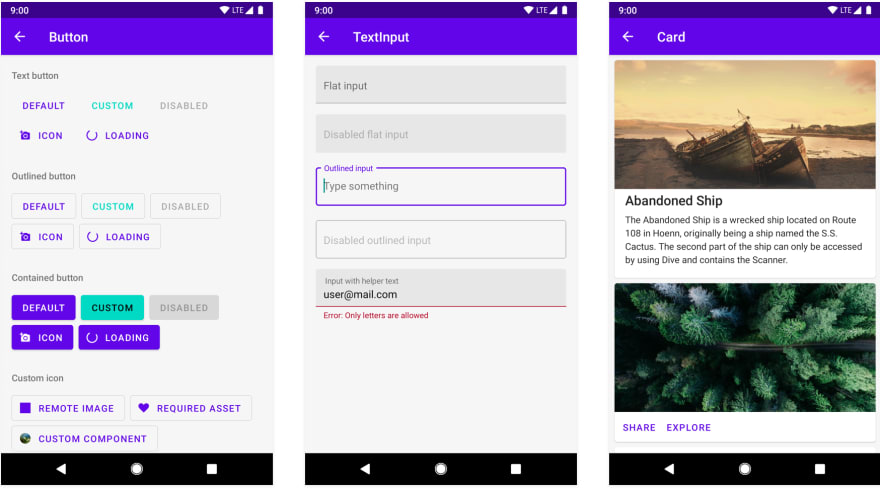 Native Base is a free, open-source UI component library with web support from version 2.4.1. It has almost 32 thousand weekly downloads and could be used with existing pure React Native project, Expo project or boilerplate.

Native Base gives great customization possibilities - setting up custom themes consisting of theme colours, font or custom components. Plus, it's possible to have different font types in the app as the library provides a set of nine font families and allows adding more font styles on your own.

Almost 30 components provided by Native Base are well-described in documentation, but there are also different variants available for many of them. Native Base uses Ionicons from React Native Vector Icons.

Additionally, there are also premium templates and UI themes available on the Native Base Market. Ready-made solutions would make your application look amazing with less time spent on styling. 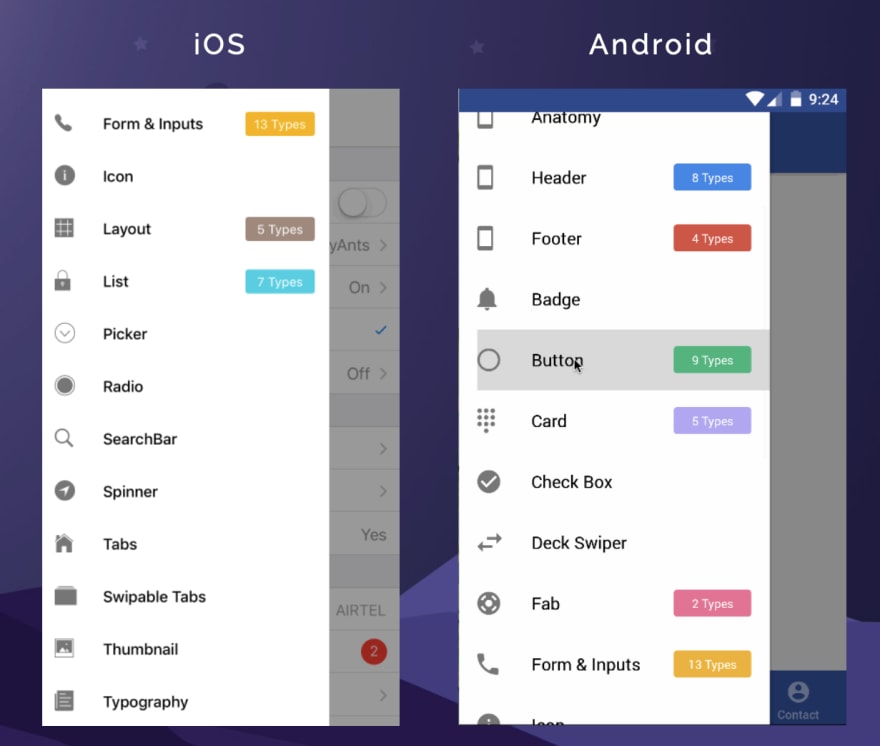 Image via Native Base

React Native UI Lib is an open-source UI toolset & components library. It has more than 14 thousand downloads every week.

This library provides users with more than 60 UI components, easy-to-customize themes with setup for colours, typography, spacing, shadows, border-radius. Moreover, it has full support for right-to-left writing system and accessibility.

From version 5.12.0, RNUI exports individual packages. That means you can import what you need. Moreover, the setup is quicker, and bundle size is smaller - it's reduced to the imported files. 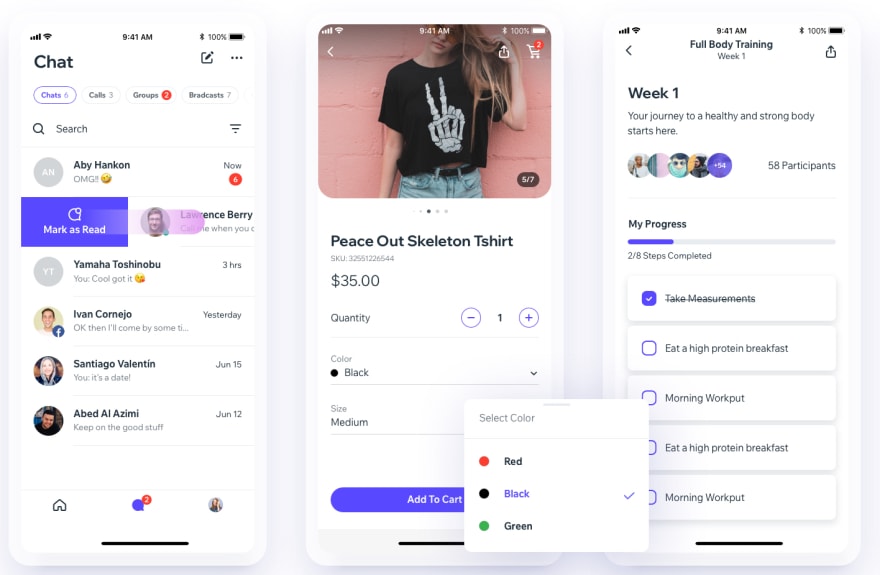 Kitten is a UI library based on Eva Design System. It provides over 30 UI components (including navigation components), 2 themes (dark, light), a pack of icons (Eva Icons) and other modules such as moment, date-ins. Kitten also support a right-to-left writing system for all the components.

This UI library is easy to set up using a template or installing it into an existing project. It has weekly about 7 thousand downloads. And again, UI Kitten is open-source.

Want to see how it works? There is a demo app of Kitten Tricks available, so check it out. 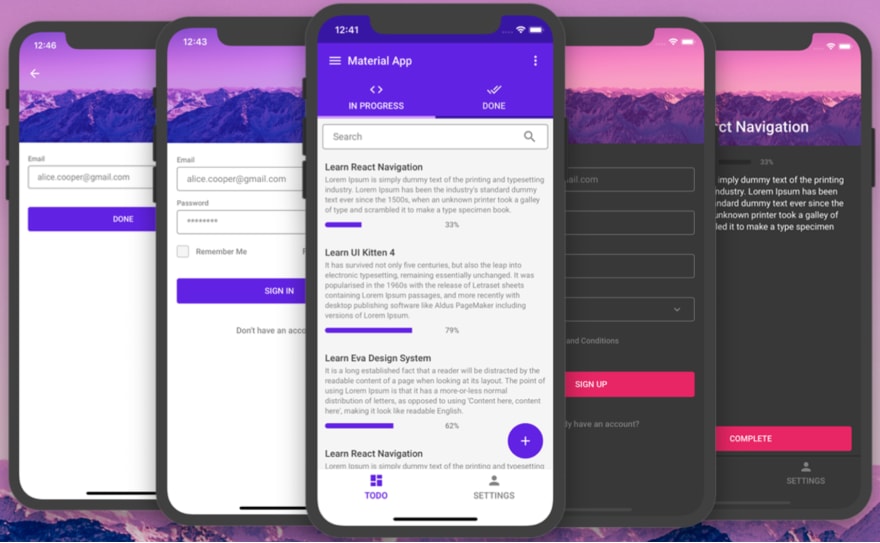 Now it's time for number 6 - Galio is a UI library under MIT License with 1 thousand downloads weekly.

Getting started with Galio is very simple - add it as an npm or yarn dependency. It provides its users with about 15 components, typography, and themes easily adaptable to React Native projects. Furthermore, as it is Expo based project, it has built-in React Native Vector Icons.

There are also premium themes available. If you want to know more, check out: https://galio.io 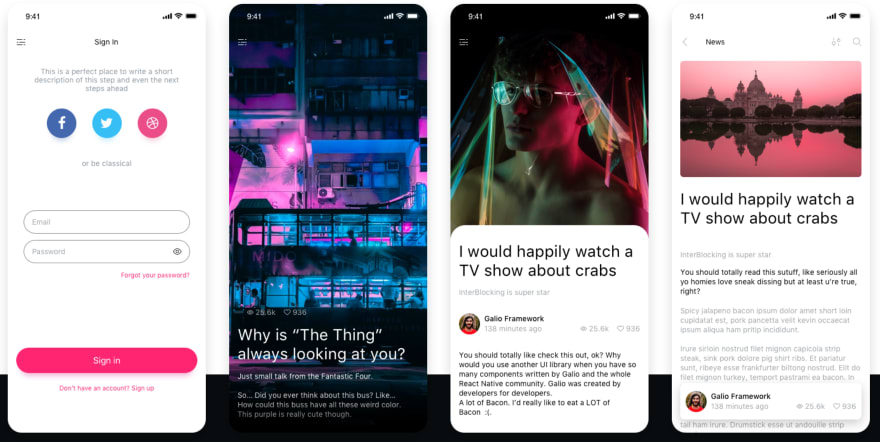 Magnus UI is an open-source design system based on the Atomic Design principle (dividing system into levels - components). It's an interesting option that comes with two main aspects - utilities and features.

There are over 25 components for React Native working out of the box provided here. With Magnus, it's possible to set consistent spacing throughout the app and customize a theme or typography. Moreover, it uses React Native Vector Icons. It's also easy to start with and simple to use.

Magnus has about 400 downloads every week.

There are also some snippets available to use. More information here: https://magnus-ui.com 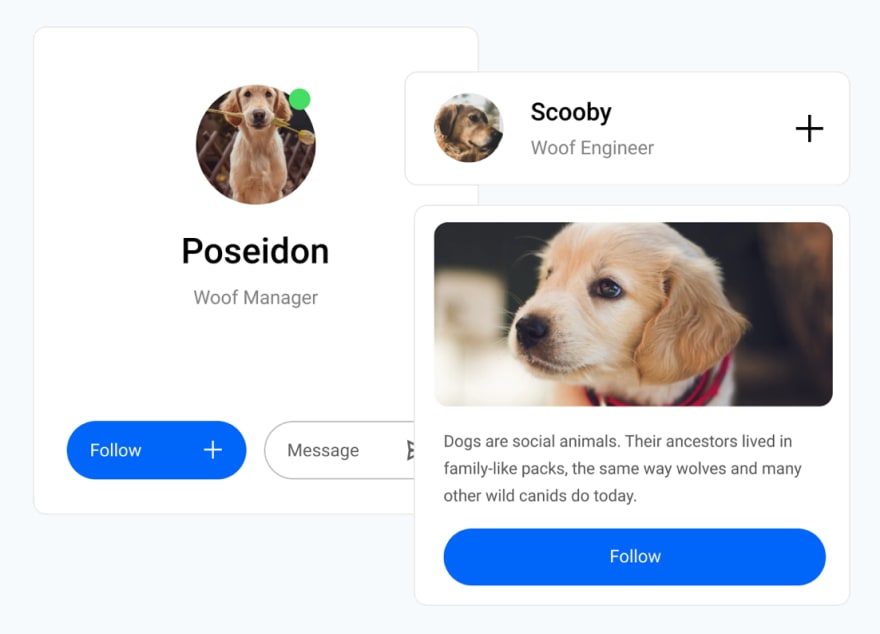 This article focused on presenting the Top 7 React Native UI toolkits and component libraries in 2021. But, of course, there are many React Native libraries that I haven't covered here.

All libraries included in this ranking are growing and are still being developed, so it's worth following their progress. Also, each of the added components and utilities is a direct response to different project needs - that's why it's so important to think over which of them you decide to use in your project.

In conclusion, UI toolkits and component libraries can help you save time and focus on building your app. Plus, you get to follow good practices set in design systems and by the developers' community. So nothing but benefits!

Gorrion Software House
Meet The Gorrion Team! 🐦 We design, develop and scale well-engineered and secure digital products.
Music Monday — What are you listening to? (August 8)
#watercooler #discuss #music
Can code be poetic?
#discuss #programming #writing
Would You Use Vanilla JavaScript (No Framework) On a Project?
#javascript #webdev #podcast

Once suspended, gorrion_io will not be able to comment or publish posts until their suspension is removed.

Once unsuspended, gorrion_io will be able to comment and publish posts again.

Once unpublished, all posts by gorrion_io will become hidden and only accessible to themselves.

If gorrion_io is not suspended, they can still re-publish their posts from their dashboard.

Once unpublished, this post will become invisible to the public and only accessible to Gorrion Software House.

Thanks for keeping DEV Community safe. Here is what you can do to flag gorrion_io:

Unflagging gorrion_io will restore default visibility to their posts.