12 Things Every Junior Developer Should Learn

is interesting, and it's nice of Ben to boost

in no particular order:

notice that other than git I didn't specify any particular tool, this is because it's stuff you will bump into no matter which languages or tools you'll end up using.

ask questions, especially if you think they're not worth being asked

Ask Questions All the Time.

What? 'Weaponize your ignorance'? What the hell do I mean?

As a new software developer ('junior' whatever - I was in my mid thirties when I started), the fastest way to get anywhere in your career is to acknowledge three things as quickly as possible:

It really is. Really.

So to make (2) happen, you need to get (1) to do (3). And you need to do that - actively. Don't wait for other people ('seniors' - they were all younger than me) to create a learning moment for you. Grab those suckas by the collar and say:

What do you mean 'RESTful'?

What the hell is a Dependency Injection Framework when it's at home?

You 'curried' that function? You did what?

Why are you using a PUT instead of a POST?

What shortcut did you just use to make that happen?

Why are you always typing git pull -r? What's the -r for?

Where's that variable coming from?

And if it's hard to ask these questions, ask:

Why can't we pair program more? It's hard for me to learn more if I can't see what you're doing.

And if you get any flak for asking 'stupid' questions:

Why aren't you interested in making me a better developer?

Why is that written on your t-shirt?

Take advantage of the fact that you're meant to know nothing at this point in your career - make that ignorance work for you! Ask questions about everything. This is your golden opportunity!

You'll discover that other programmers (for the most part) love talking about programming and ~showing off~ telling you what they know. They actively enjoy it! And, quite often, they won't know - and so you can both have a great excuse to find out the answer together through searching the interwebs - at which point you'll learn how the senior developer gets answers!

But whatever you do, don't shut up and let that acronym/technique/sentence go unquestioned. You're doing no service to anyone by being quiet: not to yourself, who won't learn anything, and not to your colleagues, who'll think that you know what they're talking about and will be annoyed when later it turns out you don't.

Be loud in your ignorance! Be curious about everything! Let your mantra be "I don't know - show me". Everything else else you need to know will flow from this one thing. Take this golden opportunity! Weaponize your ignorance.

Because, in a year or so, you won't be able to do this. In a year or so there'll be another new developer in your team asking you the questions. So take advantage of this opportunity. 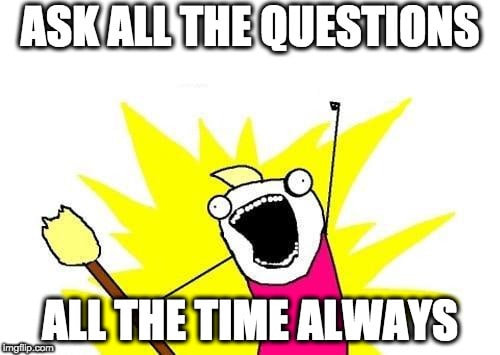 David Wickes
British. Strong opinions held weekly. No, that's not a typo. Teaches when and where and what I can.
Three Books
#career #beginners #discuss
How To Spell JavaScript
#javascript #humour #beginners
Résumé / CV Sift
#discuss #career

Once suspended, gypsydave5 will not be able to comment or publish posts until their suspension is removed.

Once unsuspended, gypsydave5 will be able to comment and publish posts again.

Once unpublished, all posts by gypsydave5 will become hidden and only accessible to themselves.

If gypsydave5 is not suspended, they can still re-publish their posts from their dashboard.

Once unpublished, this post will become invisible to the public and only accessible to David Wickes.

Thanks for keeping DEV Community 👩‍💻👨‍💻 safe. Here is what you can do to flag gypsydave5:

Unflagging gypsydave5 will restore default visibility to their posts.