A 1080p version of this video is available on Cinnamon

This is the recording of a live coding session I did on the IBM Developer Twitch channel. I was joined by my colleague Si Metson.

We decided to revive an idea we had for a previous hackathon, to be able to trigger payments to developers when they commit code to Github. We never finished that code or submitted it to the PayID hackathon in the end. So we decided to reformulate it from being a serverless function on IBM Cloud Functions and fired by a Github webhook, to being a Github Action.

This fitted in nicely with the Github Actions Hackathon that was ending soon.

In the coding session Si and I looked at what Github Actions are, and how they are defined. In short, there is a specific directory in a github repo /.github/workflows in which you can put a YAML file defining a workflow to be called.

The workflow outlines an environment on which it will run and defines a number of steps to be run. Each step uses an existing action. So for example the initial workflow we had was this:

One of the key features we liked about creating this functionality as a Github Action is that we can store and access secrets in Github. In this case we need to securely store the secret key for our XRP wallet in order to be able to sign a transaction authorising a payment to be made.

The code for pay_contributor.py can be found in the repository:

A Github Action that pays a contributor in XRP for every commit This means you can define an amount to be paid every time someone pushes commits to you repository.

The address to send the payment to is looked up via PayIds in the commit messages.

How to set it up?

The above workflow will pay each PayId…

Beyond what we achieved in the video, I went on to convert the workflow to instead of calling the python directly, to refer to the python code as an action itself. The action is then defined in an action.yaml file:

This defines the inputs that the action will take, and how it should be run. Github actions supports just two runtimes: javascript and docker. With docker of course you can create whatever runtime you want. So as you see above, on the last line, we refer to a Dockerfile.

Putting this all together, we can then publish this action on the Github Actions marketplace so it is available for anyone to use: 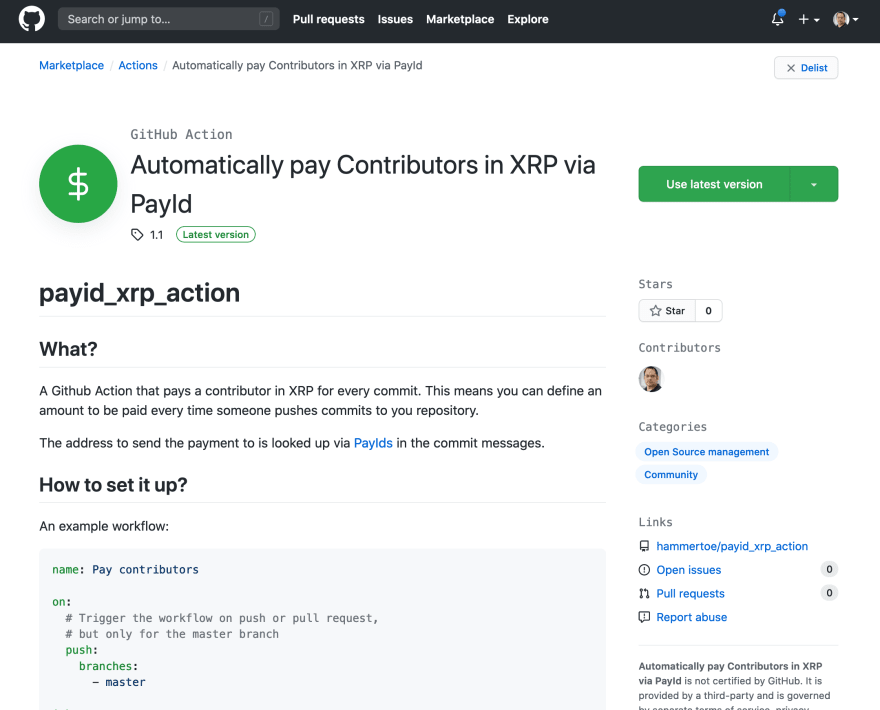 The actual submissions for the Github actions hackathon are:

For the category Maintainer Must-Haves:

For the category Wacky Wildcards:

Lord of the Pythons!!

I hope you enjoyed the video, I stream on Twitch weekly and you can usually find out when on the IBMDeveloper Twitch stream schedule or follow me on Twitter: @hammertoe.

Python's arithmetic operations and its order of precedence