We love it when our users grow with our product. Reducing churn and improving the revenue are two big growth factors for any SaaS product. In this post, let us tell you why we saw value in building feature voting tool, and what value it has added to our users.

We were basically trying to solve — “What feature should we build next for our product that would work well with users?”

Why use a feature voting software?

No matter the stage of growth you are in with your SaaS product, you need to have way of managing feedback from your customers.

If you are small business like us, you would receive feature requests, feedback, and other suggestions from your users from various channels like email, Twitter, so on and so forth.

This was very chaotic for us, and we quickly realized the value of “organized customer feedback” system.

How to manage new feature requests

Organizing feedback is simpler than what it used to be earlier, where we relied on Google forms, or some other contact form submission methods.

You need a tool that can help you bring all your users together, avoid duplicate feedback, know what are the most requested features and to keep all your users updated about the progress you are making to reduce churn.

So we went ahead and invested in building a product that would solve just this problem for us — feature upvote tool for users.

What solves it: Feature upvoting tool

When you show your users what you are up to next, they automatically tend to give you their feedback. Putting your work out there to all the users of our product made is easy for us to measure how users were responding to new features we were building.

Above all, with “feature voting”, users can vote on feedback that others have submitted earlier. Or submit a new feature that others can upvote to push it up the development cycle for us. 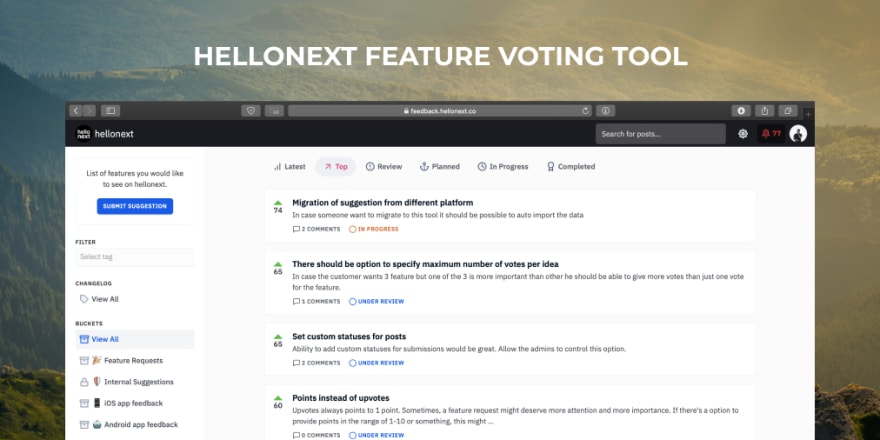 This saved both users time and our time, since they voted on features quickly, or submitted a new one. The feature upvote tool also set the expectations straight for the users about what they can expect next from us.

Pro tip: When choosing a user voting tool for your product, make sure it is well designed for your users to provide feedback. After all, they should find it easy to use.

Since our users voted on new features that they wanted us to build, it was easy for us to prioritize what we need to build next.

Also, we knew what would add value to the users, and how many would get a direct impact from this new feature when released.

How has feature voting helped us

Allowing our users to vote on new or existing features made us realize that users are starting to trust us more that we would do what they are expecting.

Simply put, users tend to wait it out for the next feature to come, before they completely make a jump to another product.

Users, when they vote on features, become a part of the product building process. This has created a sense of community, where us and our users live in the same reality. They see what we see.

No product has ever failed because of their community. They have only grown exponentially.

What benefit did our users get out of feature voting

The benefits our users got were measurable and straightforward:

The formula for us became simpler after our users started voting on features:

How to Setup and Customize Tailwind in Nuxt.js

Submit button outside the form

Once suspended, hellonext will not be able to comment or publish posts until their suspension is removed.

Once unsuspended, hellonext will be able to comment and publish posts again.

Once unpublished, all posts by hellonext will become hidden and only accessible to themselves.

If hellonext is not suspended, they can still re-publish their posts from their dashboard.

Once unpublished, this post will become invisible to the public and only accessible to Karthik Kamalakannan.

Thanks for keeping DEV Community 👩‍💻👨‍💻 safe. Here is what you can do to flag hellonext:

Unflagging hellonext will restore default visibility to their posts.