Angular has been my frontend-framework of choice for the last few years and I've been loving it. However, if you want to create a full-stack web-application, it only covers half of the requirements. For a while now, I've been pairing it with NestJS and it's been working really well in multiple projects.

I keep recommending this combination to friends and coworkers, so I wanted to finally write down the setup I use as a reference/starting point. Maybe this post inspires you to also give it a try. If so, please let me know how it worked for you.

TLDR: Angular will be our frontend-framework for this example, we will use NestJS for our backend, and all of this will sit happily married inside an Nx workspace. We will introduce a few quality-of-life improvements as well as bundle both projects up into one single package.

To recap really quickly, NestJS is an abstraction layer that sits on top of Express or Fastlify, both NodeJS-powered REST-frameworks. It is written in Typescript and follows a lot of the same patterns found in Angular (annotations, DI, etc.). Nx is a set of tools developed by ex-Googlers which help develop in Monorepos. They also offer pretty sensible default choices and configuration overrides.

First, we'll setup a new Nx workspace and create an Angular and NestJS application inside it:

When finished, this will have done the following:

What's also neat is that Nx comes with improved tooling for both projects, such as:

There's tons more features offered by Nx, but those are the ones I wanted to point out right now.

Now that we have the basic projects set up, it's time to boot them up. Open 2 Terminal windows and run the following commands:

The first command will run the default Angular dev-server, compile and serve the frontend under http://localhost:4200. The second will start the NestJS dev-server, compile the Typescript down to NodeJS-compatible JavaScript and serve the result under http://localhost:3333/api. As a nice bonus, Nx has added a proxy configuration for the Angular dev-server, which will proxy requests to http://localhost:4200/api to the NestJS dev-server for us, so that we don't run into any CORS issues while developing. The proxy config can be found under apps/client/proxy.conf.json and it's referenced inside the angular.json project definition file.

If you open now your browser on http://localhost:4200, you should see a page similar to this one: 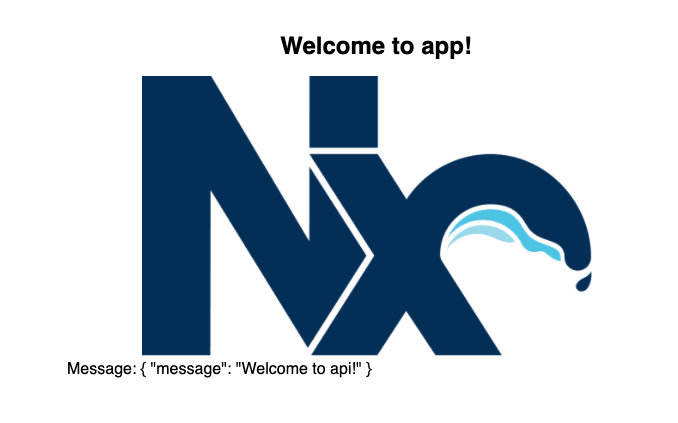 If you inspect the network and refresh, you'll see an XHR request to http://localhost:4200/api/hello showing that the proxy has been set up properly.

Let me explain what's going on:

The NestJS project was configured with a prefix to use for all controllers. This prefix was defined as follows under (apps/api/src/main.ts)

Nx also generated a sample REST-controller, called AppController (apps/api/src/app/app.controller.ts) that currently serves a static chunk of data, in our case an object of the Typescript interface Message defined like this (libs/api-interfaces/src/lib/api-interfaces.ts):

Because the interface Message is defined in the shared library, it can be used both by frontend and backend. Sweet, type-safety across both projects!

The AppController method is annotated with

which tells NestJS to expose a new GET-endpoint under http://localhost:3333/api/hello and return our message object, when the server is running.

On the other end of the stack we have the Angular project, which was configured to do a sample GET request to this exact endpoint. The sample code can be found in the AppComponent of the frontend under apps/client/src/app/app.component.ts

and it's invoked using the async pipe directly in the template:

Now, since the Angular dev-server is running on http://localhost:4200, the request will go to http://localhost/4200/api/hello due to the relative path in the httpClient call. This gets picked up by the Angular proxy config and is forwarded to our NestJS server. Awesome 🎉

Tweaking the application for development

Congratulations, we now have a workspace with both NestJS and Angular running beside each other as well as sample code on how to call the backend from the frontend. That's already pretty neat!

What I like to do in order to make for a better development experience, is starting both frontend and backend dev-server in parallel, with a single command. For this we will install a node-helper called concurrently.

Once that's done, we can adapt the package.json as follows:

Now running npm run dev will start both dev-servers in parallel, prefix each line to the Terminal with either "Angular" or "NestJS" and color the prefixes in green and blue. Awesome!

Serving frontend and backend from a single server for production

Okay, now we have a full-stack application ready for development. Let's finalise it by packaging our app as a single executable npm package that will serve both our frontend and backend.

To achieve this we will create a production build of our Angular application and configure our NestJS server to serve the frontend under its root path, so that we can bundle both in a self-contained package (to deploy it e.g. to CloudFoundry or some other cloud provider).

First, we'll create a production build of the Angular frontend:

Let's configure NestJS to serve this folder when we access its root path.

Now all we need to do is import and configure the ServeStaticModule provided by this package inside the AppModule (apps/api/src/app/app.module.ts)

which instructs NestJS to traverse into ../client from its own dist-folder (dist/apps/api) and serve the contents on its root path.

And sure enough, running only the backend via npm run start:be and navigating to http://localhost:3333/ should yield the same result as before, when we ran the Angular dev-server:

Packaging the application for deployment

All that's left now is to bundle everything in an npm package and we'll be ready to deploy our full-stack application. Let's do that now.

We need to edit the package.json to only include the dist-files and as a convenience we'll add a start-script:

Now, if we run npm pack, a tarball file will be generated for us in the project directory:

We can now upload this package to our favourite cloud provider, have it run npm install --production after the upload and provide the serve script as a startup command for the package (this step varies depending on your cloud provider).

Of course you can also run this package locally, by simply unpacking the tarball file, running npm install --production inside the directory, then running npm run serve.

I hope you found this post helpful. Let me know if you're missing any important steps! There's obviously a lot more we can do now that we have this setup, like runtime type validation for our frontend or backend, sharing logic across frontend and backend by using a shared library in the same workspace, etc. If you're interested in those topics, I'll gladly write a follow-up post to this one :)

Once suspended, hendrikfoo will not be able to comment or publish posts until their suspension is removed.

Once unsuspended, hendrikfoo will be able to comment and publish posts again.

Once unpublished, all posts by hendrikfoo will become hidden and only accessible to themselves.

If hendrikfoo is not suspended, they can still re-publish their posts from their dashboard.

Once unpublished, this post will become invisible to the public and only accessible to Hendrik Richert.

Thanks for keeping DEV Community 👩‍💻👨‍💻 safe. Here is what you can do to flag hendrikfoo:

Unflagging hendrikfoo will restore default visibility to their posts.