Xcode versions are the drumbeat that iOS teams all around the world march to. Rapid access to Xcode versions ensure that apps are submitted, and updated on time, while Xcode betas help prepare for new features, functionality, and – dreaded – deprecations.

With WWDC 2021 around the corner, enticing teams with the shiny new things the Apple folks thought up for us, this topic is more relevant than ever.

Over a 12 month period, a sample of Xcode GMs, RCs and betas was generated based on data aggregated by https://xcodereleases.com/ - For this sample of 15 Xcode releases, we pulled in publicly available information on Xcode releases on Bitrise, GitHub Actions, CircleCI, and Travis.

Whenever a particular Xcode version was skipped by a CI provider, the next version was used instead to determine availability.

The following table shows the tracked releases, and their availability on the different platforms: 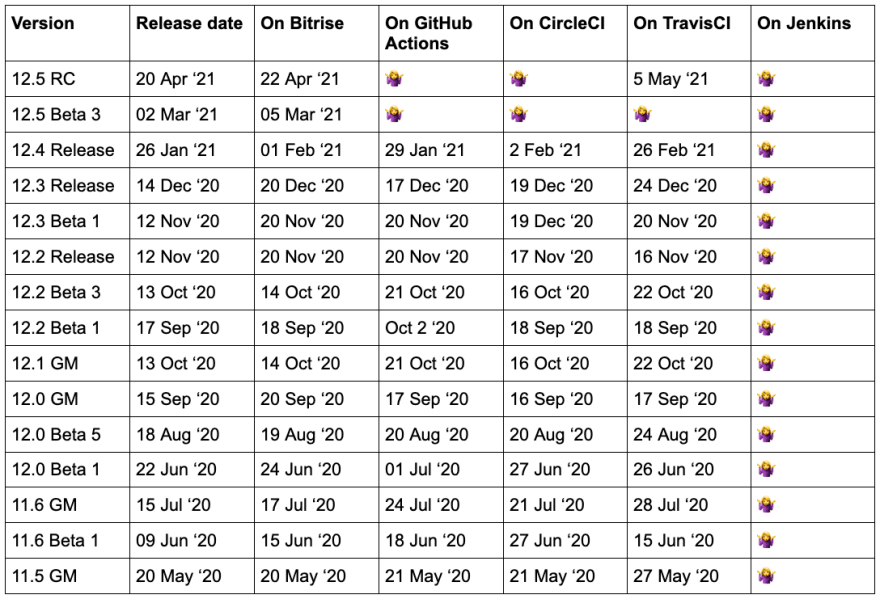 To ensure we're comparing apples to apples, the dates listed are based on CET

Speed of Xcode availability on Bitrise

Over the last 12 months, on average, it took 3.4 days to have a new Xcode version available for developers on Bitrise. This includes GM’s and betas.

Even though this 3.4 day average puts Bitrise ahead 3 days ahead of its second fastest competitor, it falls short of their aim to have new Xcode versions available within 48 hours. Mostly, this is due to a stretch of slower releases in Q4 2020, and Q1 2021 resulting from increased focus an ongoing infrastructure improvement. Regardless, they have expressed a renewed commitment to hit <48 hours availability, where possible.

New Xcode versions are usually available on CircleCI within a one week window, but their average time to availability came in at 7.2 days – a little over a week. This is mostly caused by some slip-ups related to a number of Xcode beta versions that took several weeks to make it onto CircleCI’s macOS stacks.

Note that, at time of writing, no Xcode 12.5 beta or GM is available on CircleCI’s macOS stacks, so we’ve left this latest version out of our calculations.

New Xcode versions are generally available on GitHub Actions a little over a week after launch, but their average time to availability came in at 6.5 days – a little under a week. Their average got pulled up by a handful of versions that were supported in 2 or 3 days. Like most CI’s, they also managed to support the Xcode 11.5 GM in a day.

Note that, at time of writing, the Xcode 12.5 beta made available briefly on GitHub Actions is now only available as a “private preview”. There, it can be accessed to those organizations that used GHA’s macOS 11.0 image while it was in public preview mode.

New Xcode support on Travis CI seems erratic, with some versions being supported very quickly (looking at you, Xcode 12.2 Beta 1), but their average time to availability came in at 12.6 days – close to two weeks, and slower than anyone else benchmarked in this article. Time to availability regularly ran over a week, and 12.4 took a full month to support.

Note that Travis CI is one of the few cloud CICD platforms that currently offers Xcode 12.5 builds, but they seem to have skipped the betas and took a little over 2 weeks to make the RC available.

Even though there are still quite a few mobile teams building there today, we’ve not included App Center Xcode updates in this roundup: For the entirety of the measured period, App Center macOS builds ran on GitHub Action macOS images. Their performance can therefore be assessed as being identical to what we’ve recorded for GHA.

🤷‍♀️ probably captures the sentiment here best: On Jenkins, you or someone on your team will be responsible for ensuring new Xcode versions are available.

How long that’ll take is dependent on a number of factors, including the priorities of the team, or the stability of your Jenkins environment: If it’s already kept together by luck, positive thoughts and firefighting, those engineers responsible for maintaining it will often be hesitant to rush out an Xcode update… However eager mobile developers might be to get their hands on it.

Kubernetes in AWS with kops

Control Cloud Costs and Build a FinOps Culture with Grafana

Once suspended, hhaandr will not be able to comment or publish posts until their suspension is removed.

Once unsuspended, hhaandr will be able to comment and publish posts again.

Once unpublished, all posts by hhaandr will become hidden and only accessible to themselves.

If hhaandr is not suspended, they can still re-publish their posts from their dashboard.