Which javascript framework can be titled as the best one? Anyone that is fulfilling your current needs of the project? Or the one with which coding is pretty easy? Most times, our developers prefer the one with less programming efforts and highly intelligible qualities.

For example, React is the best library framework for UI components because of its reusability of components. Also, the frameworks like Angular and Vue are confident participants in contributing their exclusiveness in the competition.

Here we share our top picks for the best frontend frameworks of 2020. 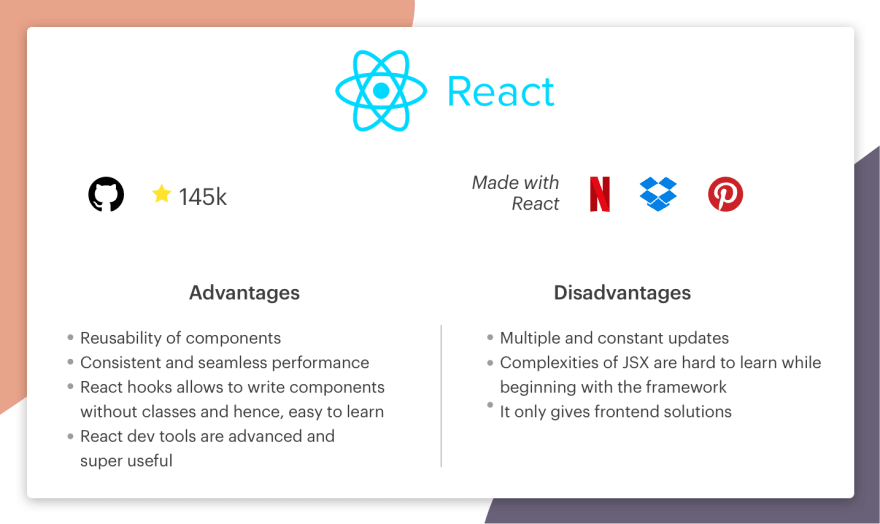 One of the simplest frameworks to learn – React – was developed at Facebook to fix code maintainability issues due to the constant addition of features in the app. An open-source framework now, React stands out because of its virtual Document Object Model (DOM), which offers its exceptional functionality. An ideal framework for those who anticipate high traffic and need a stable platform to handle it.

As a technology consultant, I would recommend React for projects that involve building single-page web applications and PWAs.

When to use React: 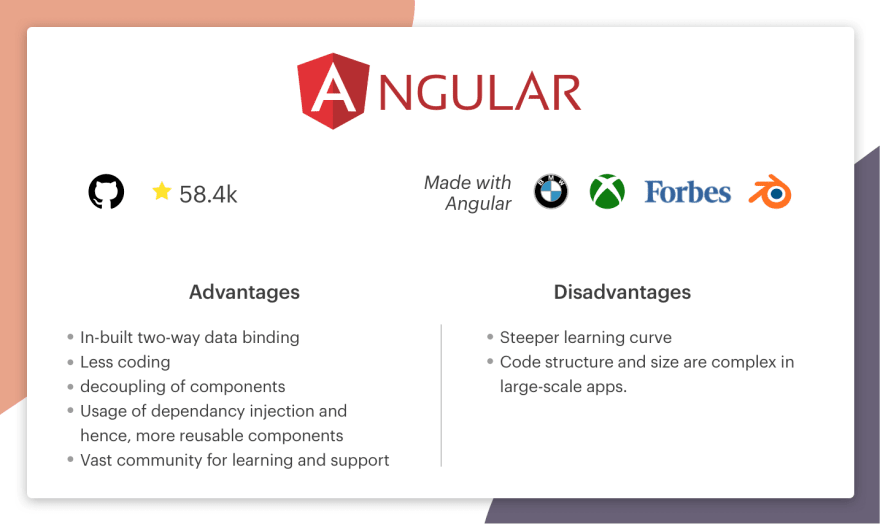 You cannot have a list of the best front end development frameworks without Angular. Angular is the only framework that is based on TypeScript on this list. Officially launched in 2016, Angular was developed by Google to bridge the gap between the increasing demands of technology and conventional concepts that showed results.

Unlike React, Angular is unique with its two-way data binding feature. It means there is a real-time synchronization between the model and the view, where any change in the model reflects instantly on the view and vice versa.

If your project involves building mobile or web apps, Angular is perfect! Besides, you can also use this framework to develop multi-page as well as progressive web apps. Companies like BMW, Xbox, Forbes, Blender, and others deploy applications built with Angular.

Compared to React, Angular is not easy to learn. Though there is innumerable documentation available, they are either too complex or confusing to read.

When to use Angular

Angular augments the performance of browser-based applications by dynamically updating the contents in no time since it uses two-way data binding. For enterprise based applications and dynamic web apps, using Angular is the best bet. 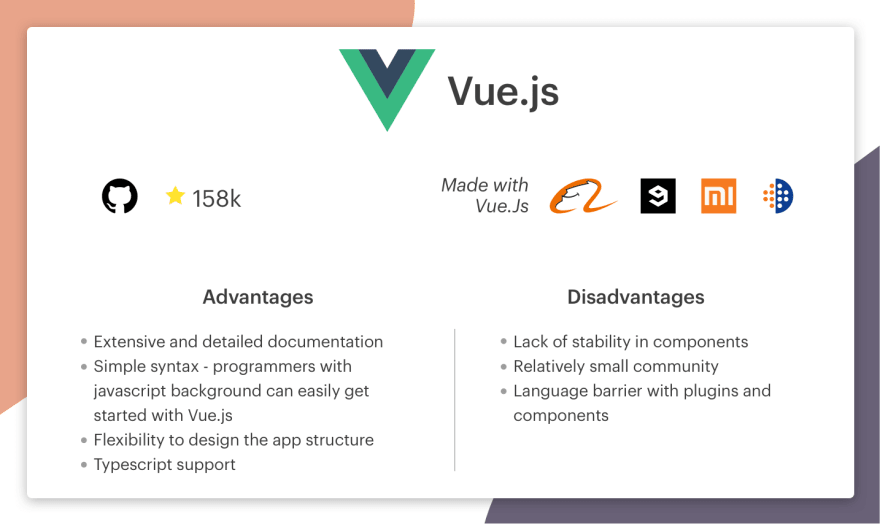 One of the most popular front-end frameworks nowadays, Vue is a simple and straightforward framework. It is good at removing the complexities that Angular developers face. It is smaller in size and offers two major advantages – visual DOM and component-based. It is also a 2-way binding.

Vue is versatile, and it helps you with multiple tasks. From building web applications and mobile apps to progressive web applications, it can handle both simple and dynamic processes with ease.

Though it is built to optimize app performance and tackle complexities, it is not widely popular among market giants. However, Alibaba, 9gag, Reuters, Xiaomi are users of this framework. Vue continues to grow in terms of adoptions despite fewer takers from Silicon Valley.

Vuejs is recommended for flexible design structures. It lets you design everything from scratch and is successful in developing giant projects as well. 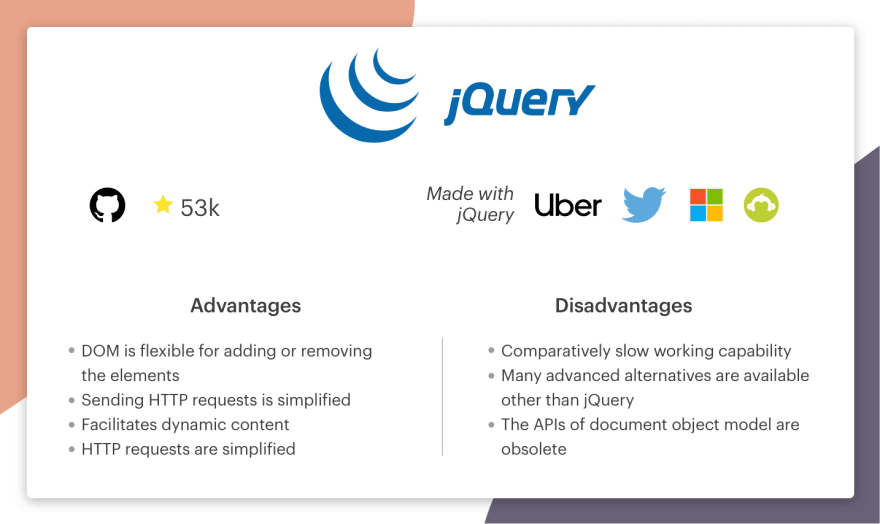 Introduced in 2006, jQuery is one of the earliest frontend frameworks. Despite its launch date, what makes it stand out is its relevance even in today’s tech world. Not only does jQuery offer simplicity and ease to use, but it also minimizes the need to write extensive JavaScript codes.

Thanks to its existence for years, there is a considerable jQuery community for the solutions.

Fundamentally a library, jQuery is used to manipulate CSS and DOM and to optimize the functionality and interactivity of a website.

Though we weren’t able to build mobile apps with jQuery, recent developments in jQuery Mobile, the usage boundaries have been expanded. What’s more, the recent development in this framework enables developers to build native mobile applications with its HTML5-based UI system–jQuery Mobile. Besides, jQuery is browser-friendly and supports any browser you intend to use.

jQuery is used in developing desktop-based javascript applications. The framework keeps the code concise and pretty simple. It is used in handling the events and performing animations. 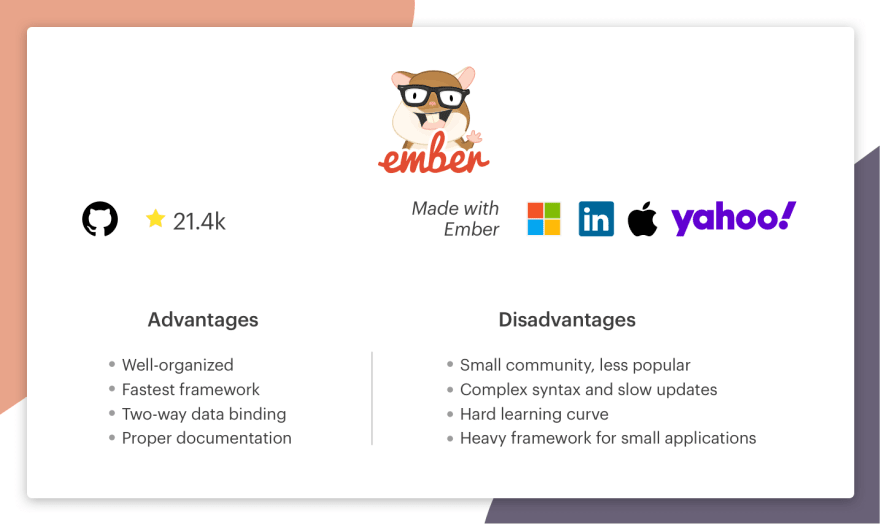 Developed in 2011, Emberjs is component-based and offers two-way data binding similar to Angular. It is designed to handle the increasing demands of modern-day technologies seamlessly. You can develop complex mobile and web applications with Emberjs and expect its efficient architecture to handle concerns.

However, Ember’s learning curve is one of its few shortcomings. The framework ends up as one of the toughest frameworks to learn because of its rigid and conventional structure. Being relatively new and under-explored, the developer community is small. Anyone with no constraint in dedicating the time for learning can go for it.

If you want to build modern applications like Linkedin with a rich user interface, Emberjs is the framework with all the technical frontend facilitation like seeing a wide range of application states because of the excellent routing provided by Emberjs.

The framework stands as the complete frontend solution for large-scale projects because it provides a ready configuration, useful binding, and custom properties to render the page as needed.

A versatile leader with experience in assisting successful companies extend their tech capabilities.