This week marks the 2nd anniversary of the Hoppscotch project. The initial commit to the project was made two years ago on August 21. Since, then, we have garnered:

These metrics are crazy and we want to thank all our users, our supporters, and our open source friends and contributors for helping us reach these numbers. Due to these huge numbers, we have realized we have large shoes to fill now. There is a much bigger expectation of what Hoppscotch is and should be. This marked a requirement for the project to be refactored so that every component of it can grow effectively with the expanded scope and today we are announcing our initial efforts towards this huge goal.

The Hoppscotch app over the span of 2 years had to grow from a simple app to a multi-faceted feature-heavy app. We have had many contributors come and go over the years and the codebase over this span didn't feature a fixed standard for how things are supposed to be done. This has lead to many inconsistent behaviors across the app and a really messy internal architecture. Hence, over the past few months, we devoted ourselves to working solely on building an infrastructure that could stand and support rapid growth. We accomplished this by splitting the codebase into properly segregated parts that communicate over well-defined interfaces and by following fixed proper code standards throughout the codebase. This effort is still a work in progress, but the base foundation for this effort is done. Hence, we are happy to introduce Hoppscotch 2.0, a release to mark the shift in perspective of what Hoppscotch is. 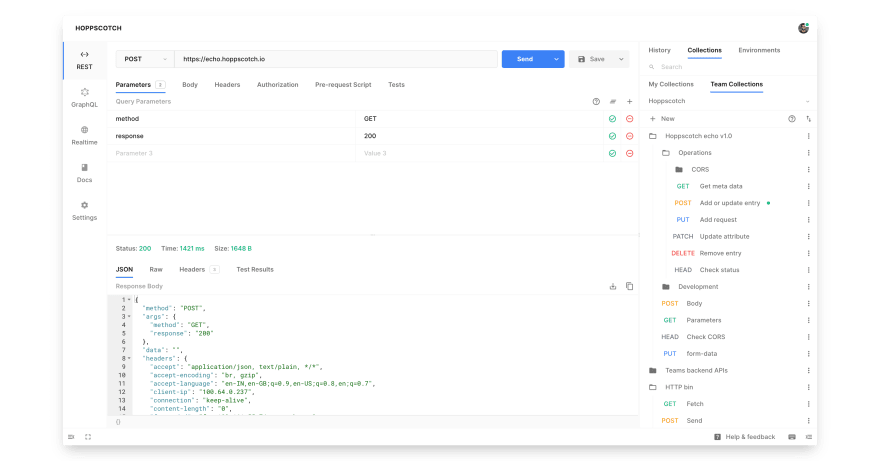 First of all, let's talk about the new design, we wanted to capture a UI that can evolve over time and yet feel familiar. We wanted it to be utilitarian and streamlined. A common complaint we received was all the excessive scrolling required to navigate the old interface and the negative space around the UI elements. Everything is cut short and made to the point with no scroll required to move around the app anymore. It's not just a new coat of paint, it also brought along with a bunch of extra features. One notable addition is the highlighting applied to environment variable references throughout the app, it's subtle, but it exposes important information like its validity (it turns red if the variable is invalid) and the current value. The streamlined internal architecture also brings the possibility for more seamless experiences. For example, Hoppscotch can now remember your session across devices (if you are logged in) and it can automatically save requests you have opened in your sessions. There are many more features in the works, which we can't wait to share with you later.

We had launched Hoppscotch for Teams last June as a closed invite-only beta. Since then, we have received more than 400 invites. We have received feedback from about 30 companies and teams across the globe who has test-driven the feature and have reported their support and cited the ease of use and the low barrier of entry as the key positives. Teams will continue in a closed invite-only beta state for a month more, but we are hoping to start with the public beta by the end of September. If you and your team are interested to try out Teams, you can request an invite over at https://hoppscotch.io/beta. We will be revealing more info about Teams and it's roadmap to general availability in the coming days, so stay tuned and follow us on our social channels to get the latest info!

With the 2.0 release, we want to mark a change in perspective of what Hoppscotch should be as a project. We are setting our sights on building a collaborative platform, open and inviting from end to end where developers (and non-developers), whether as individuals or as teams can work with and collaborate on APIs. I believe as of right now, we have a solid base in API testing, we have rich support for REST, GraphQL, and many Real-time protocols and we actively see contributions from the OSS community regarding the improvements that can be made to all of these facets. Hence, we are planning to shift to our next plan which is API Collaboration. With API Collaboration, we want to focus on developing features that help our users share, collaborate, and document APIs from within the Hoppscotch ecosystem itself. Hoppscotch for Teams is one of the core elements to this strategy, but we have more features in our pipeline we are working on which will be announced in the coming months. Another thing we are working towards in gradual but firm steps is providing a fully managed self-hostable version of Hoppscotch for the enterprises and teams which require it. Stay tuned to our social channels for this as Liyas will be announcing the plans of the project regarding the same later this week!

Hoppscotch has been mostly a two-person team that until just recently worked on the project part-time. We had received a lot of help and useful contributions to the app from our amazing open source contributors and we are forever thankful to them and continue to look forward to the support of the team. But, that being said, the project has started to become too relevant and massive in scope for just two guys to tackle by themselves. Hence, we have decided it is time to start hiring! If you are interested in building with us the future of how we as developers work with APIs, please head on over to https://forms.gle/2xM9x9NyYzirQ9ki8?_imcp=1 and have a look at our open positions. We can't wait to have you on our team!

If you like what you saw, what are you waiting for! Head on over to https://hoppscotch.io

Working Remotely from a Different Time Zone During One Month

Want to contribute to open source and help make the Hoppscotch better?

Once suspended, hoppscotch will not be able to comment or publish posts until their suspension is removed.

Once unsuspended, hoppscotch will be able to comment and publish posts again.

Once unpublished, all posts by hoppscotch will become hidden and only accessible to themselves.

If hoppscotch is not suspended, they can still re-publish their posts from their dashboard.

Once unpublished, this post will become invisible to the public and only accessible to Andrew Bastin.

Thanks for keeping DEV Community 👩‍💻👨‍💻 safe. Here is what you can do to flag hoppscotch:

Unflagging hoppscotch will restore default visibility to their posts.