For a bit more context, see the definitions of each of the keywords as defined in the official ECMAScript specifications and MDN.

Conceptually, hoisting suggests that variables and function declarations are physically moved to the top of your code. Technically, what happens is that the variable and function declarations are put into memory during the compilation phase but stay exactly where you typed them in your code. The primary importance of hoisting is that it allows you to use functions before you declare them in your code.

line 2 throws a ReferenceError: y is not defined

The next code snippet demonstrates the hoisting of let and const variables.

Variables defined with the var keyword have a scope that is its current execution context. They are not block scoped and so can be accessed from outside the block they were defined, provided it’s still within the scope of its execution context. Let and const variables, however, are block scoped and cannot be accessed from outside the block. This concept is shown below 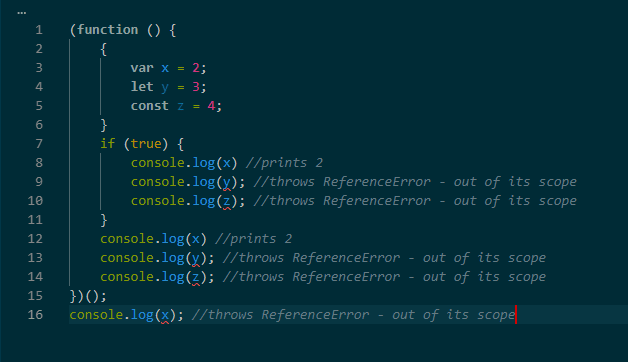 some variables are referenced outside of their scope

Also, when you declare a global variable with var keyword, the variable gets attached to the global context (window in the browser and global in node). This is not the case with global variables declared with let and const.

the variables get attached to the global context

This can especially cause a problem if you use let or const to declare a variable in multiple switch cases.

foo in both cases reside in the same block scope

Of course, it can be avoided by using curly braces around the cases to define different blocks, but this should probably be refactored.

foo in both cases reside in different block scopes

So yeah that pretty much sums up the definitions and gotchas with using either of the variable declaration methods.

Once suspended, hyper_debugger will not be able to comment or publish posts until their suspension is removed.

Once unsuspended, hyper_debugger will be able to comment and publish posts again.

Once unpublished, all posts by hyper_debugger will become hidden and only accessible to themselves.

If hyper_debugger is not suspended, they can still re-publish their posts from their dashboard.

Once unpublished, this post will become invisible to the public and only accessible to Harrison.

Thanks for keeping DEV Community 👩‍💻👨‍💻 safe. Here is what you can do to flag hyper_debugger:

Unflagging hyper_debugger will restore default visibility to their posts.