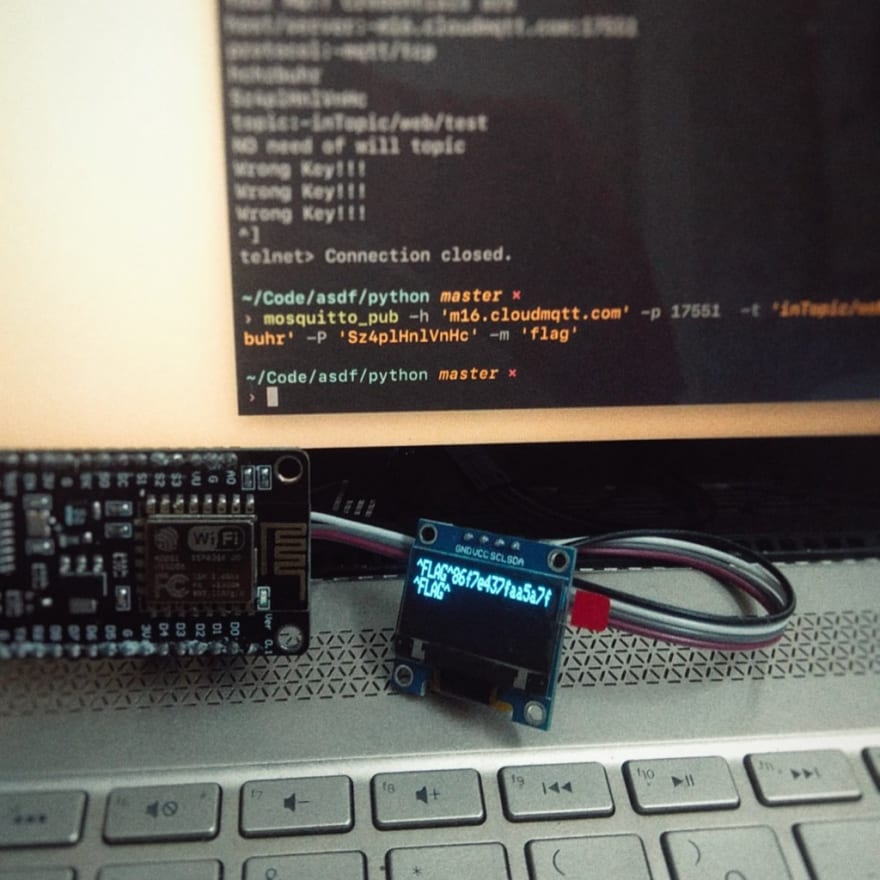 Earlier this month at Nullcon Goa, we had the chance to attempt a hardware CTF challenge designed by the folks at SecureLayer7. We weren’t able to solve it during the period of 2 days that we had (we had talks and parties to be at), but the SL7 guys were kind enough to let us keep the hardware and solve it back at home. Which we did, otherwise this write-up wouldn’t have happened :)

So what’s this cryptic “hardware” I keep mentioning, you wonder? It’s an ESP8266 board — better known as a NodeMCU. Here’s a picture. 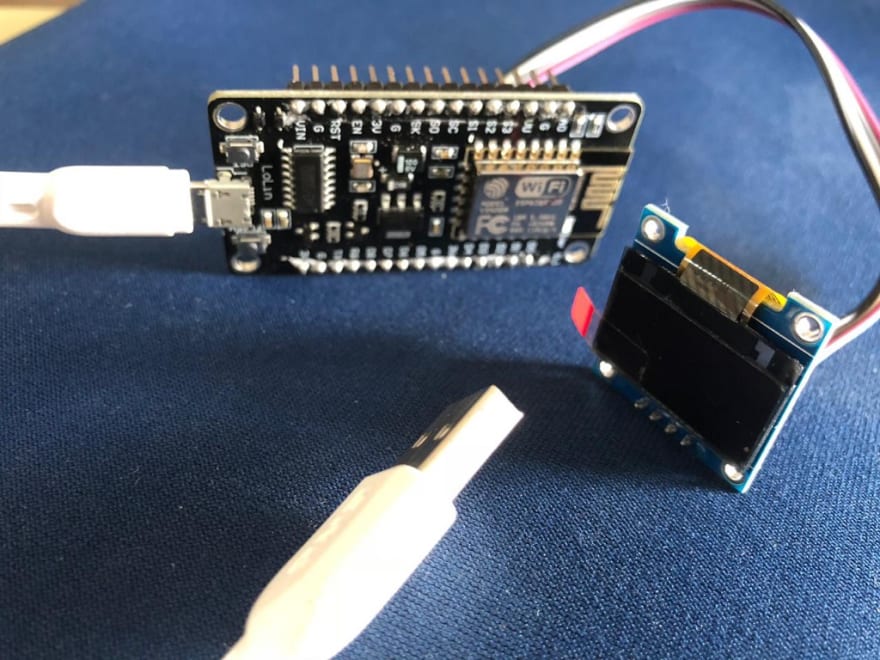 Oh, and it came with a pretty OLED display too. So the obvious task at hand was to connect the display to the board. A quick search, and we found an (ever helpful) Instructables link with the image down below.

Mind you, we struggled quite a bit at this seemingly trivial step, but hey we’re CS students ;)

On connecting the device via USB, the board spins up a wireless hotspot called “Device-6”. 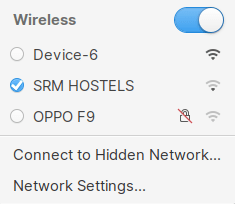 We tried to connect to this, but it was password protected. We’ll get back to it later.

During one of the many web searches I made with regard to this board, an interesting tool showed up — esptool. A Python utility to communicate with the ESP8266. Wonderful.

This tool allows us to do a bunch of operations on the board, but what we’re actually interested in is reading the flash. After looking up the syntax for it, we arrived at:

The command is fairly easy to understand, the -p flag denotes the serial port of our device, -b specifies the Baud rate and read_flash, well, reads the flash starting at 0 till 0x400000 which is 4MB.

We faced a lot of trouble here, since we kept reading only upto 2MB. Why? Because that’s what the command on the Internet said.

Anyway, we have our flash dumped into a file flash_contents.bin.

We then decided to run strings on the flash binary and peruse through the thousands of lines it had. Brilliant right? It was, actually. We found a bunch of interesting strings, along with what we guessed to be the wireless hotspot’s password. Spoiler alert: it was.

The go-to utility to (actually) analyze binaries is binwalk. The -e flag extracts the known file types it recognizes within the binary.

We see a squashfs filesystem here. binwalk creates a directory in your current path containing all the files and folders it managed to extract. cding into our squashfs folder, we see this:

Looking inside the directory named 2, we see another dir 3 containing a JPEG image and a file telling us about steganography. 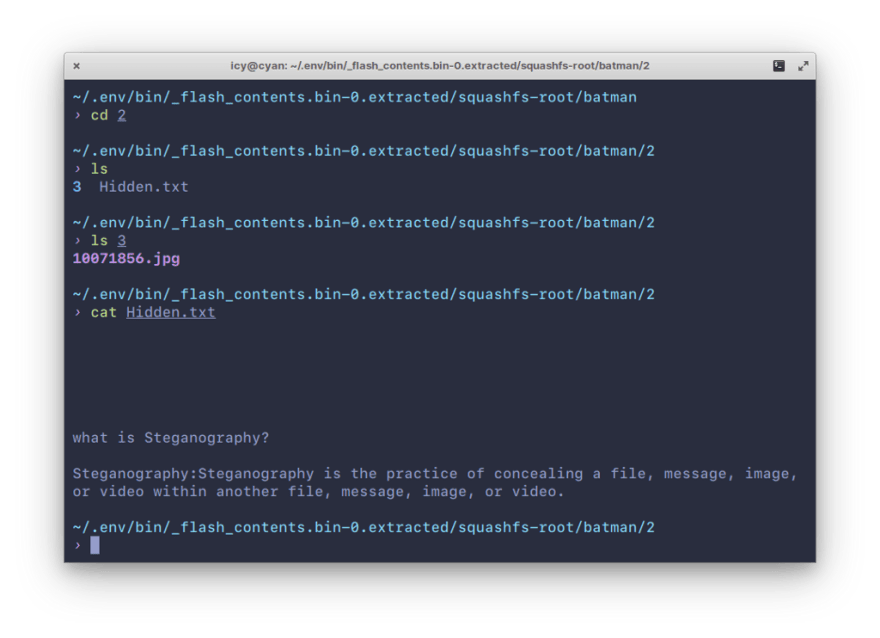 And the final directory 4 had nothing in it but a file with the string flag. Probably to show up as a false positive in the strings output of the flash dump.

The first file we came across, containing the hints, mentioned a telnet server running on the board. But how do we reach it? Yep, via the wireless hotspot it exposes — “Device-6”. We authenticated using the PSK we found earlier.

On doing so, we’re prompted with a captive portal: 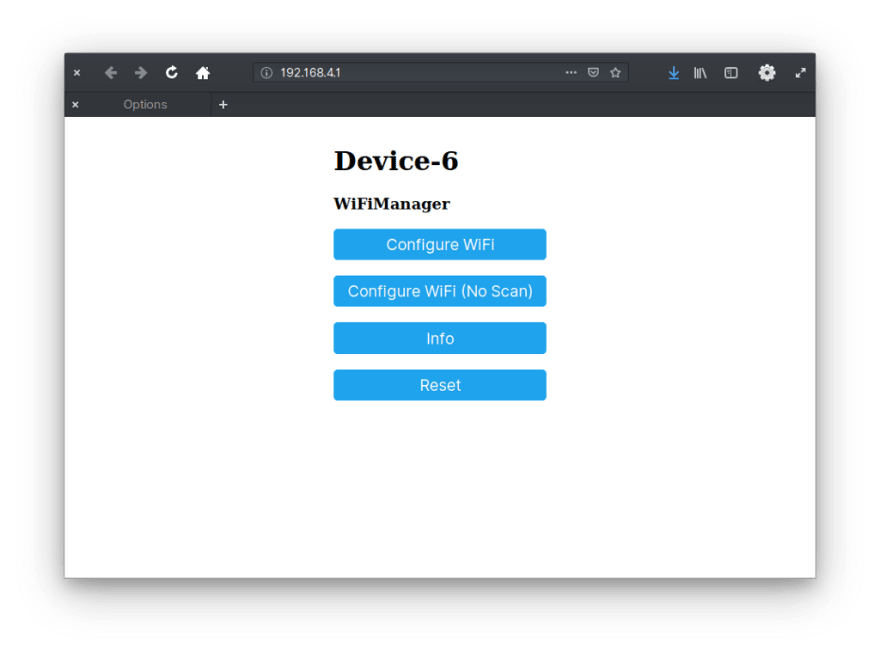 A few things can be done here, configure WiFi on the board, view some info about the board, and reset it. Let’s connect the ESP to our own SSID — like a mobile hotstpot. 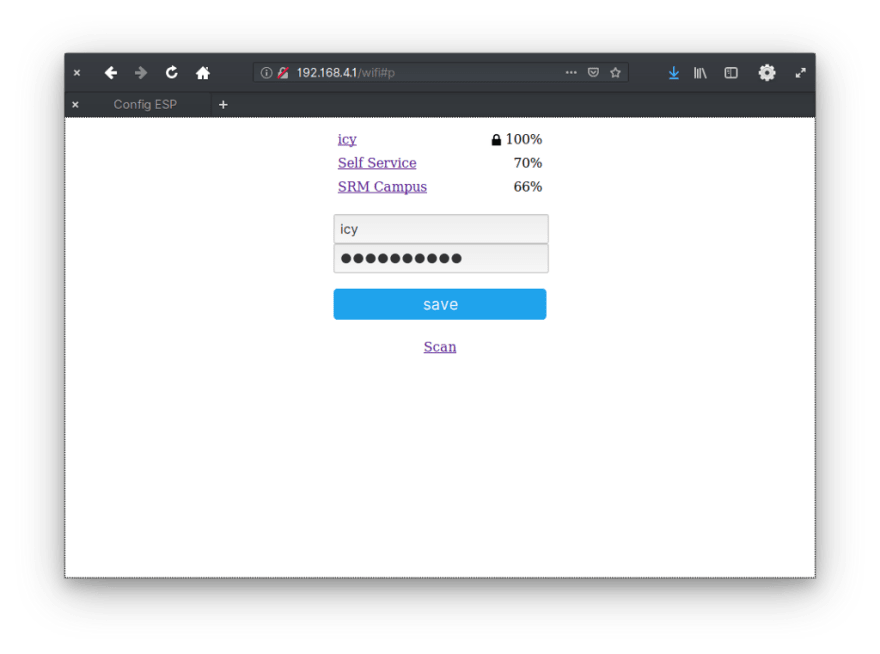 Once that’s done, we should see the “Device-6” SSID disappear, indicating that the board is now connected to our own wireless hotspot. Another thing we notice is the board lights up, and so does our display!

Once our host machine and the ESP are on the same network, we can nmap our subnet to find our ESP’s IP.

We see an http server running, which was obviously the captive portal, and our telnet server on port 23.

On connecting, we see a prompt asking for a key. And no, ‘sumbit’ was spelt that way ;)

Where could this key possibly be? Well, the only unexplored part of this CTF so far is the image file we came across before. So… steganography.

Although you won’t need it, I downloaded this Docker image for cracking stego — stego-toolkit. We then tossed the image under a bunch of steganography detection and breaking tools, but to no avail.

After a good while steghide gave us something:

This took really long for us to figure but the password was the name of the image file itself. Urgh. On entering the password, we get a keys.txt file. Here’s what it looked like:

Nearly 600 lines of gibberish. We guessed that one of these strings had to be they key for our telnet session. We tried to automate it, but the telnet session was very unstable. So being the madmen we were, we did it manually. We had all the time in the world. Off we went, copy/pasting the keys in batches of 5… and it worked.

As the hint file mentioned, we had to connect to an MQTT instance somewhere and publish something for the flag. So this is what they were talking about.

For those out-of-the-loop, MQTT is the protocol used in IoT based client-server interactions, among other things. Go read about it if you want to understand the next bit.

To interact with the MQTT server, we’ll be using the Mosquitto client. We then use the credentials and attempt to “publish” a message:

After messing around with this for quite a bit (as is evident from the screen behind), we tried sending the string ‘flag’ as our message and… *dramatic pause* we got what you’d expect.

This was our first time playing a hardware CTF, and to be honest, there wasn’t much of “hacking” involved — at least by the word’s textbook definition. A lot of guesswork too, which made some parts of it excruciatingly painful to figure out. But all things considered, it was probably the most fun CTF I’ve played yet. Here’s a shoutout to the folks at SL7 for making this CTF and letting us keep the ESP :)

P.S.: Big thanks to Raghav (info below) for helping me solve this CTF

I’m Raghav, a CS undergrad, focusing on hardware security. I go by “vologue” on the Internet.

I’m Anirudh, also a CS undergrad, focusing on offensive security and digital forensics. I go by “icyphox” on the Internet.

Feel free to shoot me a mail at icyph0x@pm.me.

How to Secure your API Gateway

What is Authorization service and why does it matter?

How (not) to store passwords

Once suspended, icyphox will not be able to comment or publish posts until their suspension is removed.

Once unsuspended, icyphox will be able to comment and publish posts again.

Once unpublished, all posts by icyphox will become hidden and only accessible to themselves.

If icyphox is not suspended, they can still re-publish their posts from their dashboard.

Once unpublished, this post will become invisible to the public and only accessible to Anirudh.

Thanks for keeping DEV Community 👩‍💻👨‍💻 safe. Here is what you can do to flag icyphox:

Unflagging icyphox will restore default visibility to their posts.