I was recently watching Facebook's F8 conference - which was streamed on Facebook Live - and it got me curious as to how Facebook Live scales so seamlessly to millions of people around the world.

How does Facebook Live scale? Let's dig in and analyze!

Before analyzing the architecture and how Facebook Live can scale to that extent, let's look at some of the challenges that building such a product comes with.

Chris Cox, the company's Chief Product Officer, had an interview with Wired1 back in April of 2016, where he enumerated the following challenges, considering that there were over 1.86 billion monthly active users on Facebook by the end of 2016:

To quote Chris Cox, this "turns out it’s a really hard infrastructure problem", which makes it even more exciting to deconstruct and analyze.

Another unique challenge with live video is that traffic comes in spikes, and your infrastructure must be able to handle huge traffic spikes. For instance, when a celebrity starts a live video stream, there will be a huge traffic spike when users join and while the video is still streaming live, and then it'll slow down drastically when the video ends but it will still by viewable by users, even if it is no longer streaming live. The main challenge will be to gracefully handle the spikes while it's streaming live.

For the purpose of this article, I'll be exclusively focusing on the high traffic spikes that occur when a user with millions of followers (e.g. a celebrity) starts a live broadcast. In cases like this, more than a million people could be watching the broadcast at the same time, and when they all join around the same time, this causes major stress on the servers and infrastructure.

When all these requests come in at once - which is called the thundering herd problem2 - it can cause streaming issues such as lag, dropped packets, or even preventing users from joining the broadcast.

When there's a possibility you may run into such a problem, the first thing you should do is prevent all the requests from hitting your streaming server directly, which could be fatal and drop the server all together. Instead, you should aim at adding multiple layers that will filter these requests and ensure that only the necessary requests make it to the streaming server.

This can be achieved in many different ways, depending on the size of your product and the number of users. In Facebook's case, they chose the following architecture:

As we can see, this architecture greatly reduces the number of requests that make it to the Streaming Server. For instance, if 5 requests make it to the Edge Cache sequentially, only the first one will go all the way to the Streaming Server and back, while the 4 others will immediately get a response from Edge Cache since it'll have cached it already. 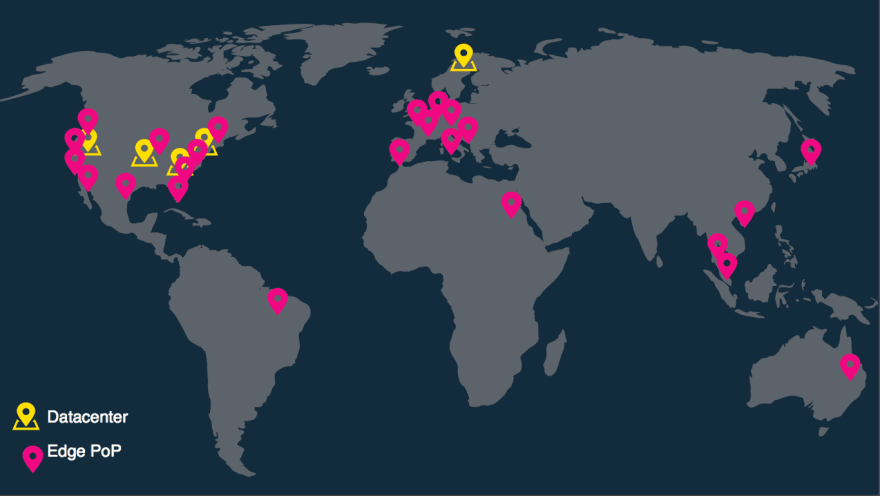 Why is it Leaking so many Requests?

The second flaw in the architecture is that multiple Edge Cache boxes can send the same packet request to the Origin Server, which will in turn forward all those simultaneous requests to the Streaming Server since the packet is not in its cache. This is similar to the first flaw but it's happening at the Origin Server level.

Again, 1.8% may not seem like a lot for normal products, but at Facebook's scale, it is indeed an important issue that needs to be resolved.

Adjusting the Architecture for High Scaling

Facebook's solution to this problem is creative, yet simple to understand. When multiple requests for the same packet hit the Edge Cache, they are grouped together in a request queue and only one goes through to the Origin Server. This is called request coalescing. Once the response comes from the server, it is stored in the cache and then the requests in the queue are responded from the cache.

The same concept was also applied at the Origin Server level, where all requests for the same packet - coming from one or many Edge Cache endpoints - are grouped together and only one of them makes it through to the Streaming Server. Needless to say that this greatly reduces the overhead on the Streaming Server, especially consider the amount of requests a live broadcast may receive.

Another important tweak that Facebook implemented was load balancing for the Edge Cache servers. In some cases, with huge traffic spikes, Edge Cache servers can get overloaded and no longer perform consistently, despite the use of request coalescing. To avoid such situations, the load balancer redirects requests to the closest Edge Cache with availability for the request. For instance, if the Edge Cache closest to you is already serving 200 000 requests, then the load balancer might forward you to an Edge Cache a little further but that is serving half the number of requests, which would mean you would still be getting a response much faster.

Facebook determines which Edge Cache is available by constantly measuring the load on these servers and keeping track of its performance. It goes even further than that and uses an algorithm to predict the load before it happens, which is incredible. The basis of the algorithm is complex enough that it would require its own article so I will not be getting into that at the moment, but it is a very interesting topic that I may cover in the near future.

For those of you using Nginx, request coalescing can be enabled by setting the proxy_cache_lock config to on (default value is off), as explained in the docs here:

When enabled, only one request at a time will be allowed to populate a new cache element identified according to the proxy_cache_key directive by passing a request to a proxied server. Other requests of the same cache element will either wait for a response to appear in the cache or the cache lock for this element to be released, up to the time set by the proxy_cache_lock_timeout directive.

I had a lot of fun researching and dissecting Facebook Live's architecture and how the engineers were able to make the product scale to millions of users. Although we may never build products that reach such a high amount of users, there are great lessons here that we can use in our own products, such as how adding multiple layers in the architecture helps filtering the number of requests that make it through to the processing server. This, in turn, improves the performance and availability of the server, which provides a better product to users and helps scaling it.

This post was originally published on Designing for Scale

Once suspended, imwiss will not be able to comment or publish posts until their suspension is removed.

Once unsuspended, imwiss will be able to comment and publish posts again.

Once unpublished, all posts by imwiss will become hidden and only accessible to themselves.

If imwiss is not suspended, they can still re-publish their posts from their dashboard.

Once unpublished, this post will become invisible to the public and only accessible to Wissam A.

Thanks for keeping DEV Community 👩‍💻👨‍💻 safe. Here is what you can do to flag imwiss:

Unflagging imwiss will restore default visibility to their posts.