One of the things we do at Codeweavers is help people find their next vehicle. That usually involves customers seeing what vehicle they are buying - I mean, would you buy a car without seeing what it looks like? The application that holds this responsibility is the worst offender for obscene amounts of allocations, time spent in GC, and generally eating RAM like the Cookie Monster eats well...cookies.

Every now and then we like to take a memory dump of this application from our production environment. We have done this enough times that we have automated the most common diagnostics steps we take and bundled them into a little tool1 called ADA (Automated Dump Analysis). If you are interested you can find the tool here and all the code talked about in this article here.

One of the analysers that we run is to dump all the byte[] arrays found on the Large Object Heap (LOH). After running that analyser against our eight gigabyte memory dump, we found several hundred byte[] arrays with a length of 131,096 or 131,186. Well that is pretty odd. Opening some of the files in Notepad++ just presented us with lots of random characters.

Throwing the scientific method out of the window for a second, I decided to mass rename all the dumped byte[] arrays to *.jpg - hey presto some of the files were now displaying thumbnails! On closer inspection, around 50% of the files were images. The other 50% failed to open as an image at all. Opening a handful of the non-image files in Notepad++ showed that they all had a line similar to this right at the beginning of the file:-

Before we go any further, it is worth establishing how busy this application is with image processing. All of our image processing is distributed across our farm using AWS SNS and SQS. Using CloudWatch Metrics we can see that easily:-

Okay, so fairly busy. It is worth noting that before any performance centric work is carried out, always establish how often the code is hit and the current costs. If a code path has a high cost (e.g. takes twenty seconds) but is only hit once a day, then it is not worth investigating. However, if the same code path is hit a lot (e.g. a million times a day) then it is definitely worth investigating.

At this point I had two culprits in mind. We have already established the application in question does a lot of image processing. But there are a few moving parts and two ways of kicking off the image processing:-

After that we transform the image and then upload it to AWS S3. At this stage I was leaning towards the SFTP, as it probably needed to verify each chunk it received from the server. But following my hunches has lead me on a wild goose chase before so ignoring my hunch I plugged chunk-signature into Google and smashed enter. Google pointed to AWS S3 as the culprit. But that is just theory, we need to prove that.

If we upload the same image ten times and use dotTrace to view the LOH we see an interesting pattern:- 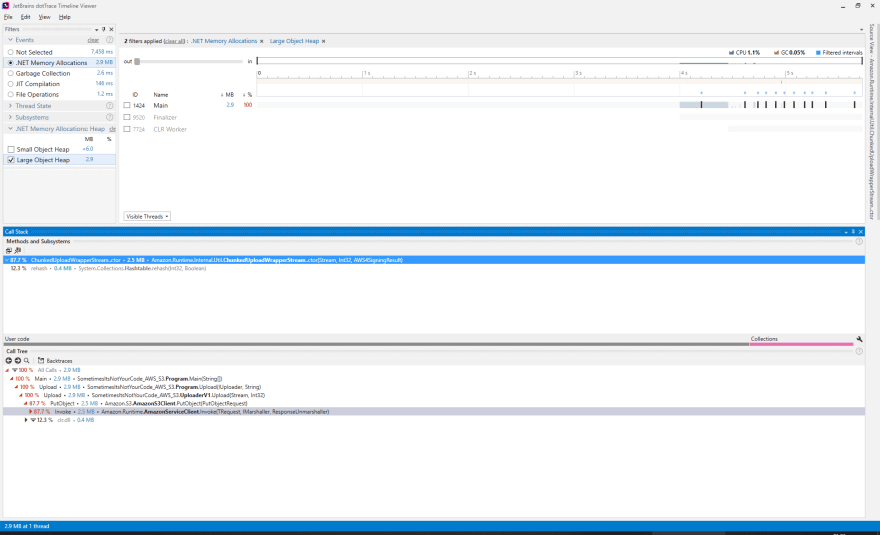 It looks like every time we call PutObject on the AWS S3 .NET client there is a fixed cost of 0.3 MB. This is a problem because it means every time you use PutObject, you are paying a high cost of 0.3 MB per upload. Just to make sure; what happens if we increase the number of times we upload from ten times to one hundred times? 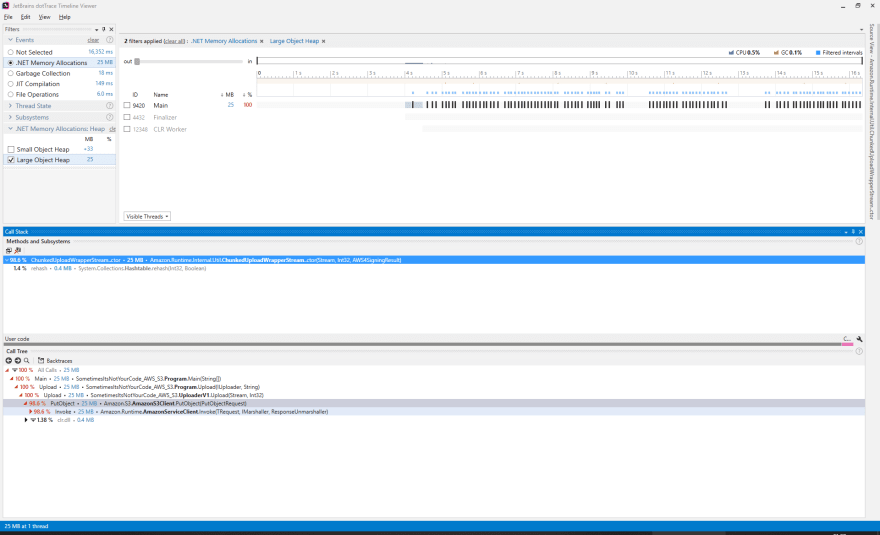 Yes, we can definitely say that for every invocation of PutObject a costly allocation of 0.3 MB is made. Going one step further and dumping the process using ProcDump:-

Running the dump file through ADA we see the exact same characteristics of there being two groups of byte[] arrays; 50% have a length 131,096 and the other 50% have a length of 131,186. Half the files are images when renamed, and half the files have the chunk-signature starting line. At this point we are certain that the AWS S3 .NET client is allocating byte[] arrays directly onto the LOH; and that is a problem.

Why is it a problem?

The LOH is a region of memory that is collected but never compacted - though as of .NET v4.5.1 compaction is now possible - word of warning compaction of the LOH is expensive; around 2.3 milliseconds per megabyte. A good rule of thumb is that short-lived objects should never make it onto the LOH.

Objects that are equal to or greater than 85,000 bytes go straight onto the LOH. The LOH operates very differently from other regions of memory. Other regions of memory get collected and compacted regularly meaning that you can just add new objects to the end after the garbage collector runs. Whereas the LOH tries to fit newly allocated objects in free space left after dead objects are discarded. This works fine if the newly allocated object is the exact same size or smaller as the free space. If a space can not be found then the LOH has to grow to accommodate that object.

It helps to think of it like a bookshelf; in other regions of memory, books that are no longer used are simply thrown away and the remaining books are pushed together and any new books go at the end of the book shelf.

Within the LOH that is not possible, instead books (objects) are thrown away, and the number of pages that used to be in that space (bytes) is recorded and the next time a book gets allocated to the that shelf (the LOH) it attempts to find an empty space that can hold that many pages (bytes). If the shelf can not accommodate the newly allocated book (object) then the shelf must be extended to hold that new book (object).

The garbage collector will collect dead objects from the LOH, and in the mean time new objects are being allocated to the LOH. This can lead to a situation over a lifetime of a long running application where the LOH size has grown to a few gigabytes (because new objects did not fit into existing empty space) but actually only contains a few alive objects. This is known as LOH fragmentation. We were extremely lucky in this situation as the byte[] arrays that made it onto the LOH had two sizes; 131,186 and 131,096. This means that as old objects of either size died and were collected, newly allocated objects were just the right size to slot right into the empty space.

Okay, back to the fun stuff.

Thanks to dotTrace we were able to establish exactly what was causing the LOH fragmentation. It also showed us that the fixed cost of 0.3 MB per invocation of PutObject happened inside of the constructor for ChunkedUploadWrapperStream:-

A quick visit to that file in aws-sdk-net repository. Shows that two byte[] arrays are created with a length of at least 131,072:-

This is exactly why these byte[] arrays are allocated directly to the LOH, they are above the LOH threshold (85,000 bytes). At this point there are a few possible solutions:-

The first and second solutions are probably the ones with the biggest wins to be had, but that would require a large pull request and introducing a dependency that the library maintainers might not want2. The third solution means that the consumers of the library have to know about the problem and set it to a reasonable number to avoid LOH allocations. No, it seems like the fourth solution is the most likely to get accepted and has the least possibility of breaking existing functionality.

All we need is a number that is lower than 85,000, normally something like 84,000 would have been perfectly suitable. However, a few weeks prior to discovering this problem I was poking around Reference Source (investigating a different issue) when I stumbled across this gem:-

Windows memory pages are 4,096 bytes in size, so picking a multiple of that which falls under the LOH threshold (85,000 bytes) makes complete sense. Time to fork, branch, create an issue, and make a pull request.

Luckily, we can make the change locally3 and see what the benefits are. Statistics for one hundred uploads of the same image via PutObject:-

Whilst waiting for my pull request to be reviewed I decided to poke around the AWS S3 documentation and I stumbled across the concept of pre-signed URLs. That sounds interesting! Creating V2 of the uploader:-

We see it has the following statistics when uploading the same file one hundred times:-

That is pretty awesome, and all we actually had to do to achieve that gain was read the documentation! Well, not true, you have the benefit of reading a summarised article with all the juicy bits. The work you see here took place over the course of a week, slotted in between client work.

Thanks to my last article I have learnt what nerd sniping is - something I do to myself quite a lot. At this stage I was feeling that giddiness about what else could be shaved off, I was wholly looking at the 0.4 MB remaining on the LOH. Again, dotTrace points us in the direction of code path causing that 0.4 MB allocation to the LOH:- 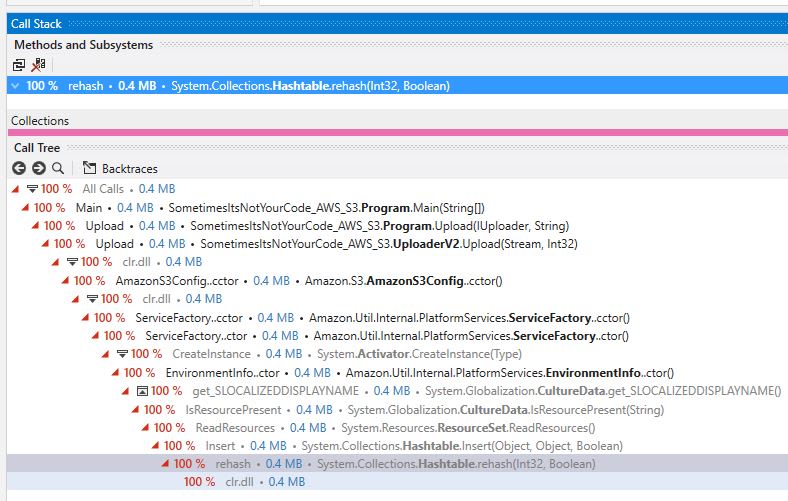 Yikes, that looks fairly serious. Quietly backing away and trying a different tact; we know a pre-signed URL looks something like this:-

We should be able to generate that URL ourselves as AWS has very kindly published their signing process. At this point I will admit that I was ready to accept defeat and just leave the 0.4 MB kicking about on the LOH. I really did not feel like the reams of code I was about to write to possibly eliminate that remaining 0.4 MB was going to be worth it.

That was until I spotted an example of what I wanted. With considerably less effort required on my part; V3 was born:-

V3 was just an experiment to see what was possible, given how small the gains and how much code there is to maintain it is not something we would actually use in production code. The discovery of pre-signed URLs is the main win here;-

Meanwhile my pull request had been merged and released in version 3.3.21.19 of AWSSDK.Core. Quick overview of the timeline:-

TLDR - Give me the good stuff

1 Another reason may be that WinDbg still scares me.

2 That being said a recent conversation has been started to take advantage of .NET Core goodness

Resources, projects, and lessons from 100 days of (serverless) cloud learning

A common language feature I never learned about in college