This article is also available in Spanish here: https://www.infoxicator.com/es/la-historia-de-micro-frontends

It is 5:30 pm on a Friday and you must deploy a very important fix to the frontend of your application; you kick off the deployment process and wait for the 50K unit and integration tests to run. Just before the tests are done, you receive a message from another team telling you that the commit they pushed last week to enable "Dark Mode" hasn't been approved yet and because it is bundled with your fix, you must stop the entire deployment process. At this point, you just want to go home and even consider changing careers.

Sounds familiar? If you have been in this situation, you might benefit from a "paradigm switch".

Enter the next generation in front end architecture: Microservices for the frontend!

But First, a Bit of History…

Not long ago our web applications were built as a huge "monolith"; backend and frontend bundled together; but as applications started to grow, we decided to "split" the backend and frontend and we saw the rise of Single Page Applications that communicate via APIs. The backend teams had their evolution and also "split" their applications into Microservices. Back in the frontend realm, the concept of "components" was introduced by popular libraries like React that provided composition and reusability to our codebases. Now, why did the frontend stop there? here is where the new concept of Microfrontends is introduced as the next step in the evolution of web development. 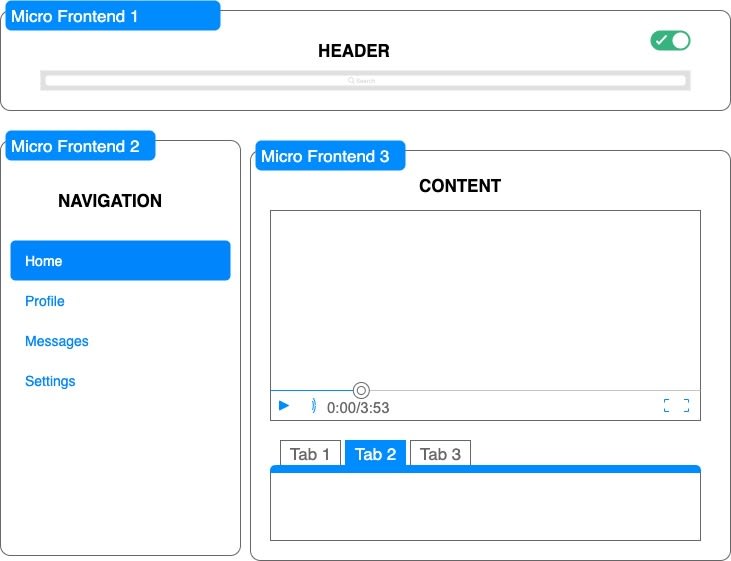 The Microfrontend architecture is a new paradigm that allows you to split the "frontend monolith" into small, reusable and independent user experiences.

These experiences have their own repositories, their own CI/CD pipeline and can be deployed and tested independently.

The micro frontend architecture might not be a good fit and it is better suited to medium to large applications with multiple teams that need to work independently.

As with microservices, with the micro frontend pattern, you will find an increased number of moving parts that have to be managed and configured increasing the overall complexity of the application. These issues, however, are not a direct product of this pattern but an inherited side effect that comes with scaling and when operating with large applications and multiple teams. Some training might also be required and the need for new tools to help to orchestrate all the pieces and bundle them together.

As your applications start to scale, and you start adding more developers to the project and new teams are created, it might be the right time to break the "frontend monolith" and give your teams the autonomy they need to deliver features faster to your users.