In this article I’ll show you how to use the Compromise JavaScript library to interpret user input and translate it to a hierarchical sentence graph.

I’ll be using Compromise to interpret player input in an Angular interactive fiction game, but you can use Compromise for many different things including:

In this article we’ll cover:

Compromise is a JavaScript library aiming to be a compromise between speed and accuracy. The aim is to have a client-side parsing library so fast that it can run as you’re typing while still providing relevant results.

In this article I’ll be using Compromise to analyze the command the player typed into a text-based game and build out a Sentence object representing the overall structure of the sentence they entered. This sentence can then be used in other parts of my code to handle various verbs and make the application behave like a game.

To start with compromise, you first need to install it as a dependency. In my project I run npm i --save compromise to save the dependency as a run-time dependency.

Next, in a relevant Angular service I import Compromise with this line:

Thankfully, Compromise includes TypeScript type definitions, so we have strong typing information available, should we choose to use it.

Next let’s look at how Compromise can be used to parse text and manipulate it.

Take a look at my parse method defined below: 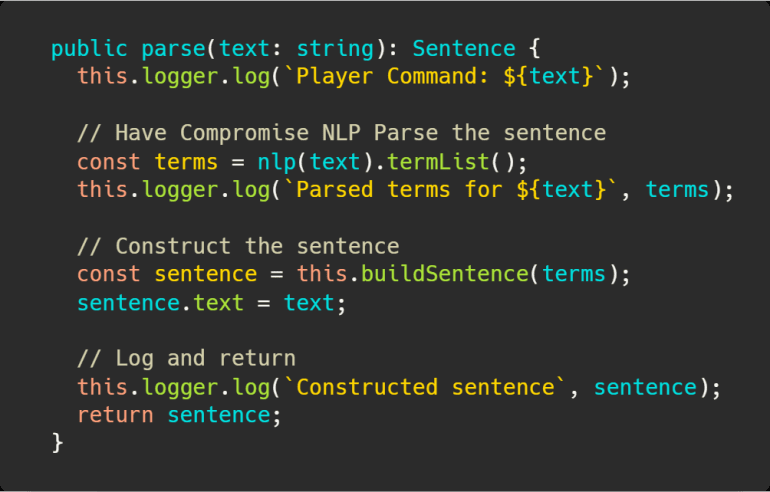 Here I use nlp(text) to have Compromise load and parse the inputted text value. From there I could use any one of a number of methods Compromise offers, but the most useful thing for my specific scenario is to call .termList() on the result and see what Compromise has inferred about each word in my input.

Note: the input text doesn’t have to be a single sentence, it could be several paragraphs and Compromised is designed to function at larger scales should you need to analyze a large quantity of text. 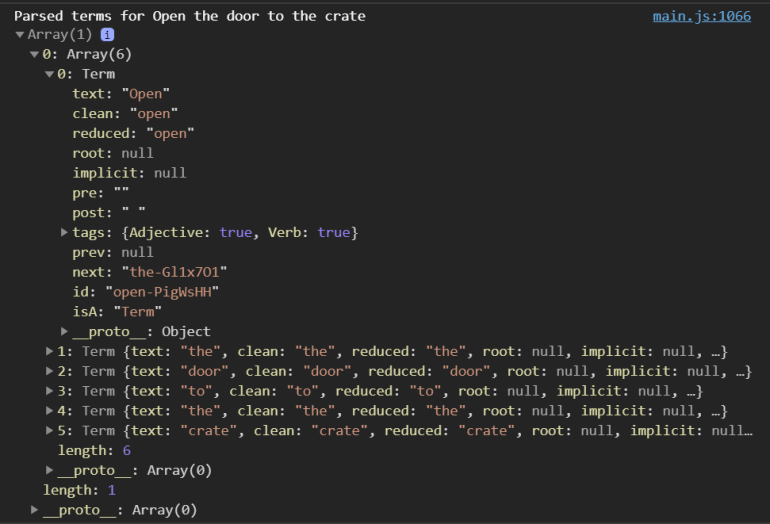 Note here that the Term array contains information on a few different things, including:

This tags collection is the main benefit to Compromise that I’ll be exploring in this article (aside from its ability to take a sentence and break it down into individual terms as we’ve just seen).

Here we see that the tags property of the Open term contains {Adjective: true, Verb: true}. This is because English is a complex language and open can refer to the verb of opening something or an object’s state, such as an open door.

We’ll talk a bit more about this disambiguation later on, but for now focus on Compromise’s ability to recognize English words it knows and make inferences on words it doesn’t know based on patterns in their spelling and adjacent terms.

Compromise’s intelligence in this regard is its main selling point for me on this type of an application. Compromise gets me most of the way there on figuring out how the user was trying to structure a sentence. This lets me filter out words I don’t care about and avoid trying to codify the entire English language in a simple game project.

If you scroll back up to my parse method, you’ll note it has a : Sentence return type specified.

This is because I believe in adding abstraction layers around third party code whenever possible. This has a number of benefits:

For Compromise, I chose to implement two main classes, a Word class and a Sentence class:

I won’t stress any of the details of either of these implementations except to state that they wrap around Compromise’s Term class while allowing me to do integrated validation and structural analysis of the entire sentence.

Once I have a Sentence composed of a series of Word objects, I can make some inferences on word relationships based on how imperative (command-based) sentences are structured in English.

Note that for the purposes of my application that I treat all input as a single sentence regardless of punctuation. My validation rules catch cases with multiple sentences fairly easily so I don’t see a need to distinguish on sentence boundaries.

Specifically, I validate that the first word in a sentence is a verb. This makes sense only for imperative sentences such as Eat the Fish or Walk North, but that’s the types of sentences we expect in a game like this.

Next I validate that a sentence only contains a single verb (Term with a Verb tag). Anything with two or more is too complex for the parser to be able to handle.

Once these checks are done, I can start to analyze words in relation to each other.

I operate under the assumption that the sentence is mainly oriented around one verb and zero or more nouns.

I then loop over each word in the sentence from the right to the left and apply the following rules:

The full method can be seen here: 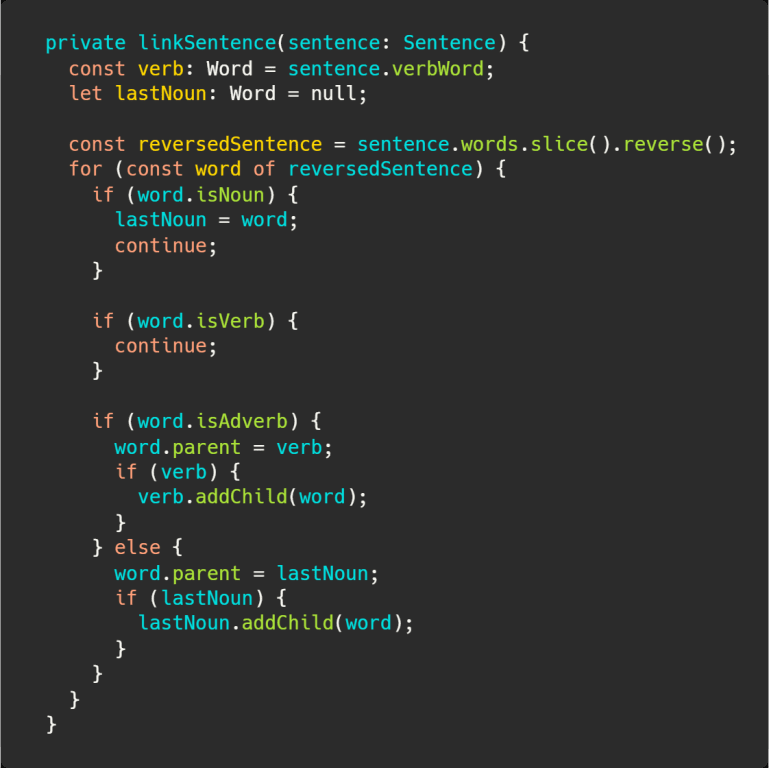 Once that’s done, I have a hierarchical model of a sentence. For ease of illustration, here is a debug view of a sample sentence:

With parsing in place the sentence contains a fairly rich picture of the structure of the sentence. This doesn’t mean that the player’s sentence makes logical or even grammatical sense, or even refers to something present in the game world.

The sentence can, however, be passed off to a specific verb handler for the command entered, which in turn can try to make sense of it and come up with an appropriate reply, though this is out of the scope of this article, so stay tuned for a future article on game state management.

Conceptually, How do you do things in 3D Web Development?

A new way to handle Translations in React based applications

How to setup golang backend and react frontend in a monorepo

Matt Eland
Matt is committed to helping people achieve greater things. After over three decades of coding, Matt put away his mechanical keyboard and made teaching his primary job as he looks to help others grow.
An Open Letter to Our Bootcamp Grads
#career #bootcamp #csharp #javascript
OpenSilver and The Return of Silverlight
#dotnet #webassembly #javascript #news
Creative Uses of TypeScript Discriminated Unions
#typescript #angular #functional