I would imagine that you’ve found your way to this blog post because you understand the Jamstack and recognize its strengths and its weaknesses. It's effective. The allure of faster load times and serverless architecture is strong and web developers all over the world are now using the Jamstack. So, how can you leverage the latest frameworks to gain that edge over the competition without breaking the bank? Well Keep reading to find out We will be comparing three of the most popular React-based frameworks that are compatible with Ionos Deploy Now: Gatsby, Next.js, and React-Static; their use-cases, pros, and cons.

Gatsby is one of the more well-known React frameworks because it is very versatile and has a strong development team driving its growth. Another thing that defines Gatsby as a popular framework is the documentation available from their site. Without well-organized documentation, we, as developers, are already placed at a severe disadvantage. My love of documentation aside, I've compiled a list of the pros and cons of Gatsby below, as well as some use-cases to help jump-start your creative spirit.

No GUI - Gatsby doesn't offer a graphical interface for interacting with their framework. For some this is not a problem, for others, it could be a barrier to entry.
Learning Curve - Whether this is your first time using a CMS or you're migrating from another platform you'll have to learn how to use Gatsby and its associated features.
Doesn't Support Dynamic Content - It is possible to serve dynamic content with Gatsby, it is not recommended and it is difficult to accomplish it effectively.

As you can see, Gatsby is a pretty powerful React framework. It's important to remember though, that Gatsby is only useful for certain kinds of websites and applications. I've included a few different examples below...

Use Cases/ Examples
Gatsby is great for sites that have a large number of pages such as blogs, news sites, documentation portals, and things of that nature. Whether it's a single page or ten-thousand pages, Gatsby makes creating them easier than ever. Here are a few noteworthy sites that were built using Gatsby:

1) Create a new site by entering the following commands in your terminal:

2) Visit your site locally by copying localhost address from the CLI stdout to your browser bar.

3) Now, create a new Git repository on GitHub and copy the URI of the repo to your clipboard.
Initialize git and push your project to the created GitHub repository using the following commands:

4) Setup deployment by signing into your Deploy Now account and clicking “New Project.” Next, choose the source you want to deploy from. Grant the requested permissions to IONOS and proceed to choose the following configuration: 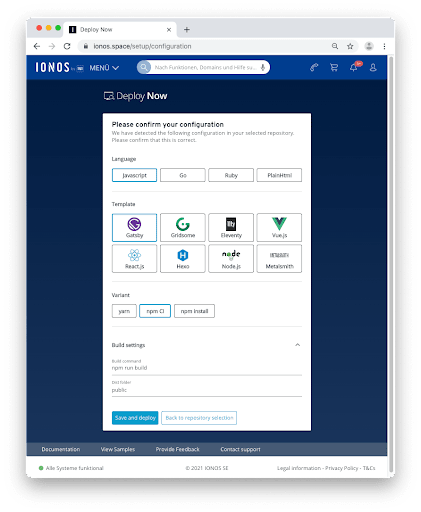 5) Now, take a short break until your project build is deployed. Deploy Now will always show you the current build and deploy status of your project. When it is finished Deploy Now will provide you with a direct URL to your project. You can also find a new workflow file within your repository named .github/workflow/deploy-now.yaml.

Here are a few examples of pages made with React Static:

What makes react-static an interesting framework is the fact that it rehydrates your static site into a fully functional react application. So if serving up static pages at breakneck speeds is something that you can see you or your company needing to do in the future, then react-static is worth keeping in mind. At the same time, you need to remember that react-static thrives on the need to display static pages fast, so if you’re working with a site model that is JAMpacked (excuse the pun) with dynamic pages full of unique styles then react-static may not be the framework for you… yet!

1) Create a new site by entering the following commands into your terminal:

2) Start a new project by entering these commands into your terminal:

3) Follow the prompts within your terminal to configure your project. For the sake of this example we will be using the basic template.

4) Now, create a new Git repository on GitHub and copy the URI of the repo to your clipboard. Afterwards initialize git and push your project to the created GitHub repository by the following commands:

5) Next, Setup deployment by signing into your Deploy Now account and clicking “New Project.” Choose the source you want to deploy from. Grant the requested permissions to IONOS and proceed to choose the following configuration: JavaScript, then Node.js and public. Congratulations your site is deploying!

Next.js is a hybrid static site generator. This essentially means that Next.js can accomplish nearly everything we have discussed up until this point and more. Most importantly though, Next.js is production-ready and has excellent support for SEO optimization. However, there is one caveat: with all of the wonderful features, such as pre-rendering, code-splitting, SEO-optimization, etc... you are required to run Next.js in tandem with Node.js which is ultimately outside of the scope of this article, however, static generation/ pre-generation works with Deploy now but Node.js can only be used at build time NOT at run time. Even though this article centers around Deploy Now, we figured Next.js is such a great framework that it deserves an honorable mention.

Some sites that utilize Next.js include:

If your company needs a production ready website that can handle the load that comes with a small to medium sized business and the associated web presence then Next.js is definitely worth looking into. As you can see some of the biggest companies in the world use Next.js because of its ease of use and scalability. If you are interested in learning more about Next.js, make sure you check out: https://nextjs.org/.

1) Create a new sitelocally by entering the following commands into your terminal:

2) Visit your site locally by copying the localhost address from CLI stdout to your favorite browser.

4) Delete the following import from pages/index.js:

5) Next, locate the following image tag:

6) Replace it with the standard HTML img tag:

7) Next, edit the package.json file and add the export option prerendering all pages to HTML:

9) Now, create a new Git repository on GitHub and copy the URI of the repo to your clipboard. Afterwards initialize git and push your project to the created GitHub repository by the following commands:

10) Setup deployment by signing into your Deploy Now account and clicking “New Project.” Next, choose the source you want to deploy from. Grant the requested permissions to IONOS and proceed to choose the following configuration: 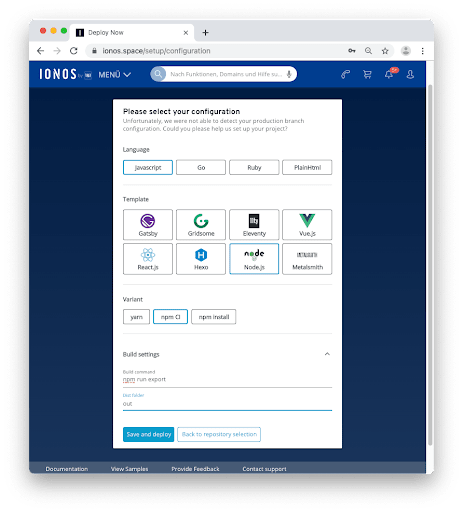 Deploy on Git Push: With IONOS Deploy Now, you can instantly deploy your site or app from GitHub to our DDoS-protected, georedundant, green IONOS infrastructure.

Once suspended, ionos will not be able to comment or publish posts until their suspension is removed.

Once unsuspended, ionos will be able to comment and publish posts again.

Once unpublished, all posts by ionos will become hidden and only accessible to themselves.

If ionos is not suspended, they can still re-publish their posts from their dashboard.

Once unpublished, this post will become invisible to the public and only accessible to Danial Hunt.

Thanks for keeping DEV Community 👩‍💻👨‍💻 safe. Here is what you can do to flag ionos:

Unflagging ionos will restore default visibility to their posts.