This is a multipart series to help you set up stripe API's within the context of react, express mongoDB applications. In the first section we will make our first test charge to your stripe console. in the second part, we will set up error handling in the testing environment. In the third part, we will deploy our dev environment to heroku and have a functional credit card payment system on the web.

if you haven't had very much experience with these technologies you could still try and do this tutorial but it would be much better to learn about these things before you try, because this is going to be an advanced tutorial relating to a specific stack and requires a computer already configured for this development environment.

fill out the information so that you can get to your stripe dashboard.

the dashboard should look something close to this.

right under the small bash teminal is the publishable-api-key.

these keys need to be handled with care to ensure your site stays secure.

we will get back to that in a moment but let's make our express application.

Make a directory for the project. we will start by making our full-stack application.

next let's initialize a package.json from the command-line by running this command.

open the directory with your favorite text editor. I'll be using vscode.

since this tutorial needs a production build to make our payment system work we are going to try and make our server ready for deploy from the start so that we don't have to refactor later.

before we start adding code. I want to clarify, the only time you will see duplicate pieces of code the function names and boilerplate for them when I have structured functions and given them structure later or when I talk about certain parts of the file then share the whole thing.

let add the code to get our server running in development.

Everything on the server.js is the bare essentials for a production deploy with the integration of stripe API. Especially the code before the || or operators.

if everything when well you should see this when you type nodemon server.js into command line inside the root directory.

Next we define the paymentRouter to make the post request on the backend.

before we leave the server.js define the route.
server.js

since our paymentRouter.js is an empty file, our server is crashing. Add this to the and the server will run normally again.

if you're logged into stripe and look at any of the examples in the docs you'll notice that they are nice enough to provide you with your test API keys in the examples.

Rather than adding our keys directly into the code, we will set up environment wide variables to represent our keys so that we can push to public repositories without hackers being able to steal our payment credentials.

now we should make the post request for the POST '/charge' route between the module.exports and the const stripe.

note: you can hard code the amount for testing and choose whatever currency type you are most likely to be receiving payments with but the source key has to get the stripe token from the front end for the value.

now make and set up a .env file to ensure our secret keys are working.

the command after the &&, ensures that you don't push anything in the .env files to github which is exactly what we want.

Make sure that the .env looks a little faded out and that it says .env in the .gitignore file before you git add or git commit anything. Remember that we are about to be dealing with real money, real credit card numbers, and real people that deserve your due diligence 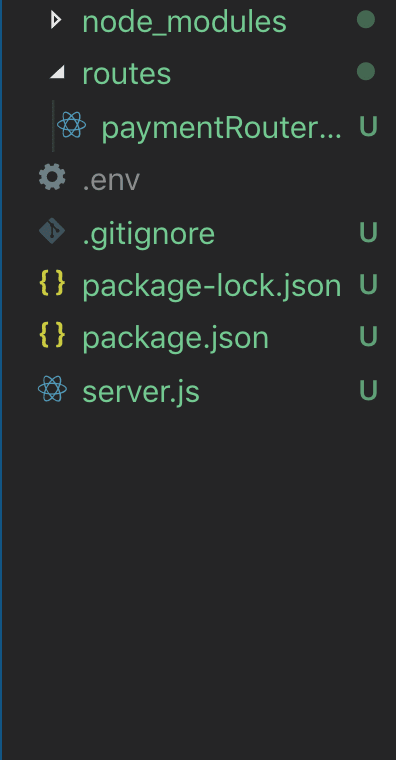 just to drive my point home.

now lets our use create-react-app to make a client folder.

now we install all the dependencies.

lets set up the .env files for the front-end.

Go to your stripe dashboard and get the publishable test key, the one prefixed with pk_test. These are the ones that you can see without typing your password first.

inside the .env file write...

we have to add the REACT_APP_ part to the apikey because this is the way that create-react-app handles environmental variables.

add the proxy to the package.json for the client folder.

make sure that your commas and double quotes, follow proper convention for json objects.

now we need to prepare the index.js in the src folder with the stripe and elements context to be available app wide. You can add this more dynamically to your app but for the sake of scale we will add this where we would put any other piece of context.

notice that we are adding variables that don't exist yet. that's so that we don't have to refactor for production mode.

you can tell if it worked by opening the dev tools where stripe gives a warning message.

clear out the App.js to make room for the CheckoutForm.js we are about to make.

then go to the CheckoutForm and make a skeleton component.

first at the top.

and at the export default. pass in the injectStripe higher-order component the CheckoutForm as an argument like this...

Now that we have all of the props from context, let's render the card element inside the div.

now we need to make the function to send the users input to the back-end.

this is a hooks refactor from the stripe docs on how to do this.

import useState at the top.

let see if we can hit the the post request from the front-end to the back-end. by adding this code.

a button underneath the < CardElement / >

add the boolean for completed transactions at the top of the functional component.

here is the function to send the request to the backend

you can test the system by typing 42 for every number in the transaction like this.

if the payment was successful the complete boolean will be marked as correct and you will see it.

in part 2 we will show you how to make a production deploy to accept real money.

Once unpublished, this post will become invisible to the public and only accessible to Tallan Groberg.