Do you known "Prolog"?

"Prolog" is a programming language that was developed in 1972.

Interestingly, in Prolog programming, programmers don't write operation sequences.
Instead, they write "facts" and "rules" as a Prolog code.

Then the Prolog runtime tries to find solutions to the query, and the runtime tells us solutions if they are found.

I feel Prolog is a little bit strange and funny.

Before I know Prolog, I could not think that create a PC application written by only logical code, not procedure code.

Can I create Single Page Web App with Prolog?

By the way, I have learned "Blazor" which is technology to create a Single Page Web Application (a.k.a "SPA") with C#.

And I know there is the Prolog interpreter "C#Prolog" written by C#.

So, one day, I came up with the idea that by combining Blazor and C# Prolog, I could create a SPA in Prolog.

"Spprologa" - the library to make a SPA with Prolog

"Spprologa" allows you to make a SPA with Prolog.

Maybe as you know, due to this library built on Blazor and C#Prolog, all of the Prolog codes are running inside of the Web browser, not the server process.

The Prolog codes are interpreted by the interpreter (C#Prolog) that runs on the Web browser's WebAssembly engine, not transpiled to JavaScript.

This means "Spprologa" apps can be hosted on any HTTP servers that can serve at least static contents, such as GitHub Pages, Firebase, Netlify, Azure Static Web, etc.

You can see the live demo site (following URL) which deployed to GitHub Pages.

"Spprologa" is based on Blazor, therefore .NET SDK v.5.0.101 or later is required to develop a "Spprologa" application.
To install .NET SDK into your PC or Mac, please see also the following URL.

And I recommend installing the "Spprologa" project template by the following command, before starting "Spprologa" application programming.

Create a new "Spprologa" app project , and run it.

Once the installation of the project template is complete, you can create a new "Spprologa" application project in the current folder by the dotnet new command.

After creating a new "Spprologa" application project, executing the following command starts building and running the app. And the application's URL will be opened by a default Web browser automatically.

If you want to deploy the app to a Web server, execute the dotnet publish command like this:

After executing the command above, all of the contents will be generated that are required to running the app in the path/to/output/wwwroot folder.

"Spprologa" application programming is based on 5 features as following.

1. *.razor.prolog files in the project are consulted automatically.

2. Bind result of a query to DOM contents.

Use @query("...") to retrieve a variable value inside a solution of a query which is specified as an argument, and render it as the HTML contents.

If the user inputs the text "gopher" into the input element above, then all input(name, _) facts will be retracted, and instead the fact input(name, "gopher") will be asserted.

If the user clicks the button above, the query check will be called.

Use the <Case> component to retrieve all solutions of a query and render values of each solution to HTML contents.

The above code will render to HTML as follow:

What can "Spprologa" apps do?

As you know from my live demo site, I created a "coloring map" solver. 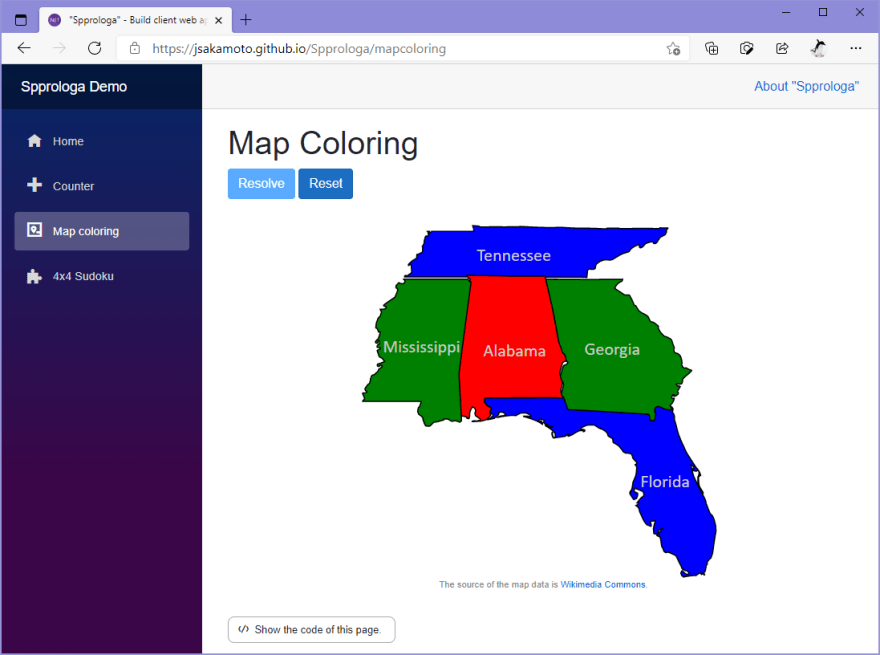 The core code to resolve it is just the following.

And I also created "Sudoku" (but this version 4 x 4 cells) solver. 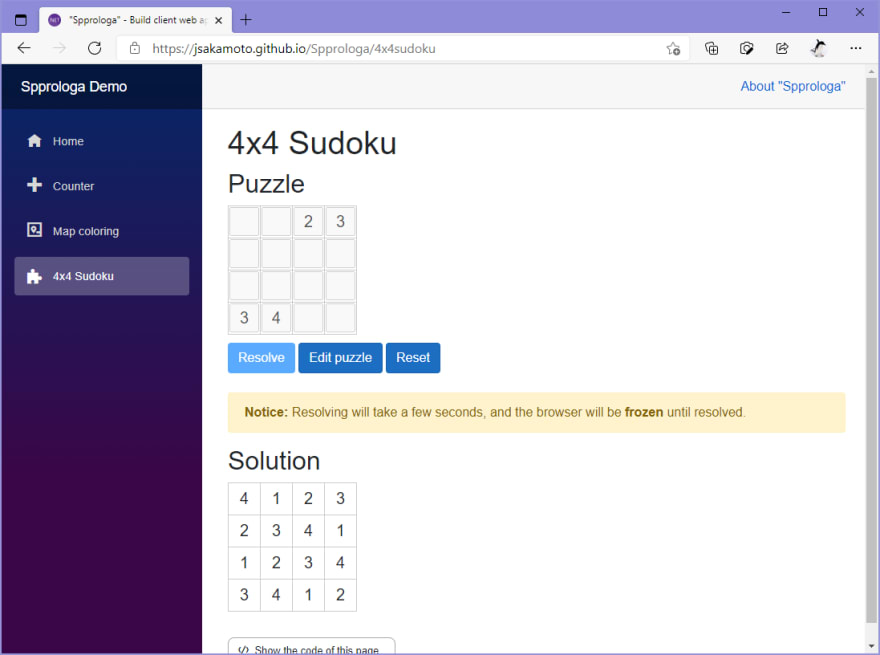 The core code to the solver is just the following.

Interestingly, I didn't program any algorithms to solve them.

Instead, I only wrote constraints and rules of those puzzles as a Prolog code.

I think this is the wonder and charm of Prolog programming.

Notice: This is just "Proof of Concept"

"Spprologa" has been started by just only my interest that the "Prolog" can make a single page web app or not.
Therefore, this library may be abandoned after I lose interest in it.

However, this project is distributed under the Mozilla Public License.

So anybody can fork and can continue this project freely anytime, and I will strongly welcome it. 👍

Have fun with Prolog programming!