Before we begin here is the link to what you'll be able to create once you read this whole article.

Yes, indeed, it is possible to capture images on the browser. Well, it is true that with the power of JavaScript, we can do almost anything but on a browser.

So, yes with the Navigator API, you can get all the data about the user's device and also have access to particular peripherals like the device's camera, microphone, etc. Now the Navigator API is pretty rad considering the variety of stuff you can do with it.

In fact, just in case if you did not know this, you can even check the battery status/percentage/charging of the device, and on mobile devices, you can even use navigator.vibrate(100) in order to vibrate the user's device just for some haptic feedback.

So by now, you probably have got enough idea of what you can do with JavaScript's Navigator API, it is way sexier than how it sounds here.

Well since we are making a camera app, we need to show the user what his/her device's camera is seeing. And in order to do that, we are going to have to stream their camera footage on an HTML Video tag. So here's how the HTML looks like,

Well I used Material UI in order to make the capturing buttons look a bit prettier.

So as you can see in the HTML, there are 3 main components the <video> tag to stream the footage sent from the device's camera, the <button> tag to click the picture and <canvas> the legendary HTML5 Canvas tag where we would be seeing the still image that we click when the <button> is pressed.

Now let's take a look at the CSS, it ain't much but still I want to show you guys the whole code.

That's all CSS we need for this, now let's move on to the most essential part of this project, the JavaScript. Now pay attention on each and every line that I write after this because it is important that you understand every line of code that I wrote in order to bring life to this project. If you have any questions regarding the JavaScript part, feel free to mention it in the comments down below.

This is what it would look like if you run the code on your machine. 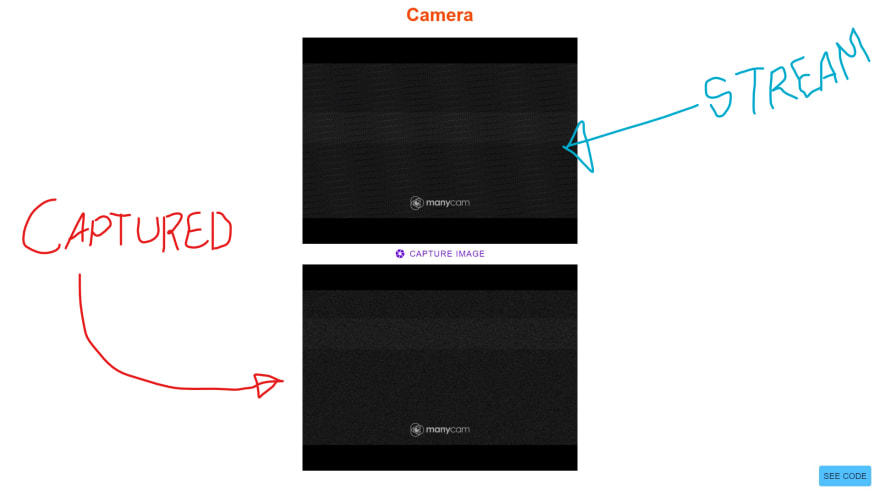 I know, I was too shy to turn on my real camera so I used my virtual camera... However you can check out the code working by clicking here

Now for some of you, exclusively those who did not read the code above, let me summarize on what's going on here.

So basically at first what we are doing here is, creating an object variable called constraints, where we would basically mention what media devices we are going to access of the user.

We are going to keep the audio false since we are using the <video> in order to stream the user's video, and if audio were true, the user would be able to hear his own voice which is preposterous.

After this, we are going to hook up the user's video to the <video> tag so that the user can view his video and click an image when he/she wants to. And on order to do that, we create a function

All of the video data would be present inside the stream parameter which is like an event parameter that returns navigator data.

Now whenever you are accessing a peripheral like the user's camera/microphone you would be needing the user's consent to do so.
And in case the user denies to do so, then the code would throw an error stating the reason of the error. Usually if the user denies the reason of the error is a string with a message like NotAllowedError and we need to check if that error comes up or not. In case it does, we need to handle it.

And now finally in order to start the video stream of the device's camera on the <video> tag, we need to run this line,

Over here what we're doing is getting the user's media data with the help of navigator.mediaDevices.getUserMedia(constraints) based on the constraints that we set before which is allow video and not audio, this returns a promise which we get as a parameter variable in the function handleSuccess(stream), and in case if there is an error then we .catch() it and call the handleError(error) function to further handle it. And that's it we've finally started to stream the user's footage on our <video> but we have still not written the code to click images.

Now, in order to take a still image, we are going to use HTML5's Canvas to draw the image of the current frame that is being showed on the video stream.
So we need to click an image only when the user presses on the Capture button, and therefore,

In the first two lines, what we're doing is setting the size of the canvas to dimensions of the video that we are receiving from the userMedia. canvas.width = video.videoWidth; canvas.height = video.videoHeight;
After this we draw the frame which was being shown when the user clicked the capture button. In order to do that we run this line,
canvas.getContext("2d").drawImage(video, 0, 0, canvas.width, canvas.height); Over here we are basically drawing a 2d image of the video frame on the canvas. We use HTML5 Canvas's .drawImage() function in order to do draw the frame. This generally takes in 5 parameters respectively, the video element in order to draw it's frame, the x and y coordinates of where to start drawing on the canvas i.e. 0, 0 and the x and y coordinates of where to end drawing on the canvas which is basically the dimensions of the canvas since we want the image to take up all the space in the canvas.
And that's it. We have made our Browser Camera that can take still images!! Pretty cool right? Now in order to download the image you have taken, you can run the following code where we are basically converting the canvas drawn data into a .png, well it can be anything, jpeg as well.

Open the URL that get's logged in the console, it's basically a data link. In layman's language, it's the image you clicked just that now it's no more a visual image but just a string comprising random characters that makes sense only to computers.

Meanwhile check out SnapShot the camera app that I made where you can not only take images but also edit them just after you're done with clicking your image!! Click on the image to open the website!! 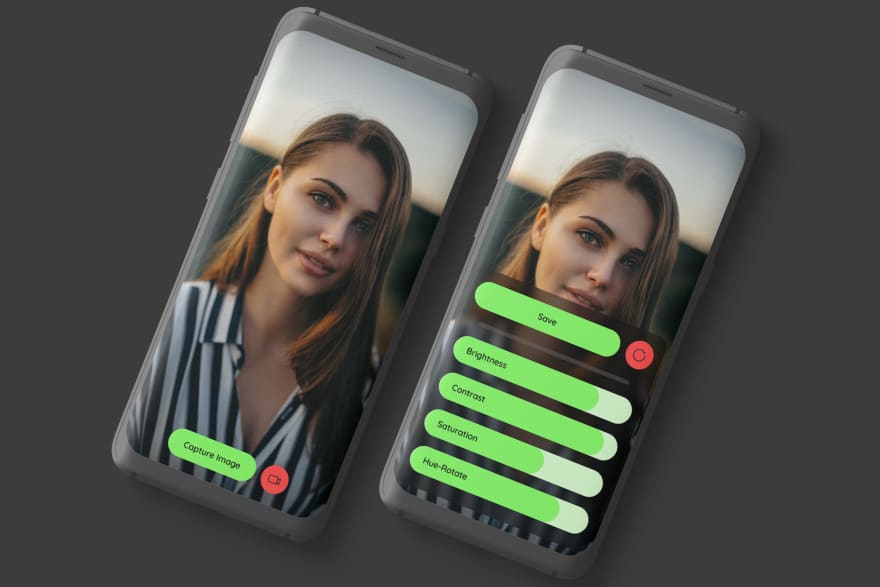 You can also contribute to the project here!!

An online Camera that uses your camera to take images, which you can immediately edit with quick edit and also download on your device.

An online Camera that uses your camera to take images, which you can immediately edit with quick edit and also download on your device. Live at: https://snapshotcam.netlify.app ~ Part of Project Enigma

Once suspended, jaagrav will not be able to comment or publish posts until their suspension is removed.

Once unsuspended, jaagrav will be able to comment and publish posts again.

Once unpublished, all posts by jaagrav will become hidden and only accessible to themselves.

If jaagrav is not suspended, they can still re-publish their posts from their dashboard.