The philosopher David Hume wrote about the Principle(s) Of Association.

His ideas were in the context of how we come to "know" things (e.g. epistemology) and draw connections between ideas.

For example, if your mother always wore a special kind of dress along with a certain type of perfume (when you still lived with her), and today you saw someone else wearing that dress and that same perfume, your mind would immediately be drawn back to memories or feelings you had about your mother.

We aren't going to get philosophical here.

But, we do tend to make decisions about people based on these kinds of associations.

For example, one of these kinds of associations I've written about before is being associated with a well known public figure or company. That could be as simple as having a blog post featured by Apple.

Next, you can "name drop" on your resume, website, etc. There's going to be a natural association with the brand that you have mentioned and yourself.

I have called these kinds of associations "Leverage Points" in the past.

These aren't designed to prove that you have a core skill. It's like icing on the cake. Really yummy icing.

The more of these leverage points that you can bring up in an interview, resume, etc. the more you are drawing implicit connections and associations between yourself and these other people, organizations, etc.

As you stack them up, it can be key to building your reputation. 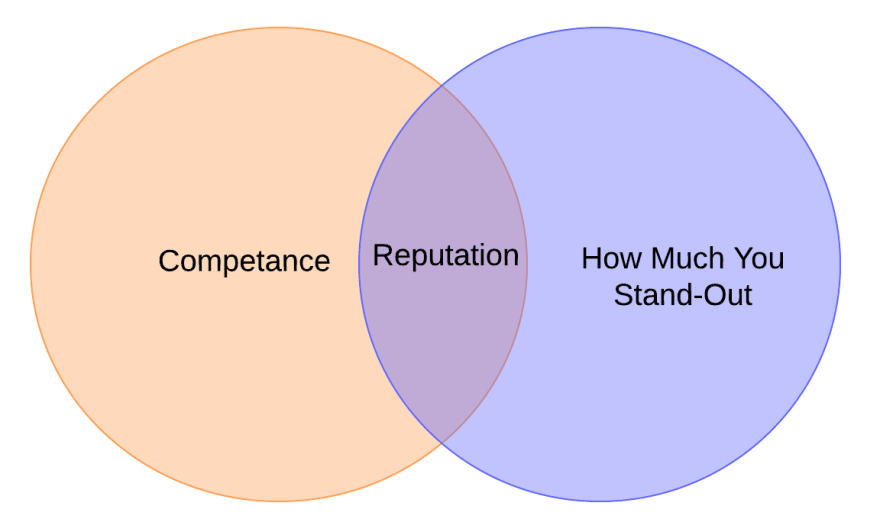 Leverage points, depending on what they are, usually will help to support both core pieces of what I see as forming your reputation - competence and standing-out.

They give people more reason to believe you are competent and will foster helping you to stand-out.

If, for example, you have been featured by Google for writing a solid technical article, then placing this at the top of your resume (in an achievements section) will immediately associate yourself with Google.

If most of the other resumes are just lists of work experience, roles and what skills they possess - you will stand-out.

You will have something interesting that no one else has. And, you'll have created an implicit connection between yourself and Google (as a positive connection, hopefully).

By having a one-liner "Article XYZ featured by Google's thing" (yes, with Google bolded), the reader of the resume will think "Well, if Google thinks he/she is knowledgeable enough to feature them, there's probably a chance that they are! Let's give them an interview."

If you have somehow associated yourself with other people who are well known as being top-notch, then it "rubs off" in support of your reputation.

Examples From My Career

I'm writing about this because it's something that's been coming up in my career recently.

About a year ago, my open source project Coravel starting gaining traction in the .NET community. The newsletter for this site has also gained tons of traction (with over 1000 subscribers in the first 8 months!).

Through my work with this site/newsletter, Coravel and writing some technical articles, I've had some awesome opportunities that I never expected. I was featured by Microsoft on their main .NET community web site, on Steve Smith's podcast and recently on the .NET Core show - among other places.

What happens with being on Steve's podcast, for example, is that now anyone who's listening to his show will, in some way, associate me with Steve and even some of his guests.

The same with the .NET Core show. My face is now featured on the same web page with highly regarded developers that I look up to!

What if you were hiring a senior developer and one of the candidates had been featured on the same podcast that some of your dev heroes were previously guests on?

Would that make an impact?

How can you build these?

Keep in mind that this is a long game. I've been blogging for years before I saw any glimpse of recognition.

This goes back to the idea of compounding interest in your career.

Your career is like a garden. It takes time and consistent work.

Some plants take a long time to show signs of growth and might only bloom close to harvest time.

Can You Plan For It?

Do you just work hard and expect opportunities to come by?

When starting though, focus on one area and keep building it up using the tactics above.

As time goes, you'll get opportunities - take them! If you gain momentum, don't be afraid to reach out to podcasts, guest blogging platforms, etc.

Last But Not Least

And finally, keep a journal of all your leverage points so that you can bring them out when needed!

Preparing the code interview... on the other side of the table (Part I)

Using Dall-E AI For a Professional Creative Project: Here's What I Learned

Thanks for keeping DEV Community safe. Here is what you can do to flag jamesmh: