As a software engineer or web developer, you've probably heard the term "microservice" before, but for less seasoned developers, the concept of microservices is likely an unfamiliar and seemingly daunting term.

The goal here is to break it down - explain what it is and why you should care.

Monoliths and the "monolithic server"

Before we can understand microservices, it's important to understand the traditional architecture used for building applications, commonly referred to as the "monolithic server".

The traditional full-stack applications is engineered into two primary parts:

This segments the presentation and of information and the implementation of business logic into the front-end, while the backend supports those features and enables persistence of data.

While not specific to software, the analogy is the same.

Typically the monolithic architecture is referencing the back-end (server) that supports data persistence and handles all the logic pertaining to creating, modifying, deleting, and retrieving information related to an application (or applications).

With Monolithic servers, every feature is run on the same system (computer/server) and is part of the same codebase and the same database. 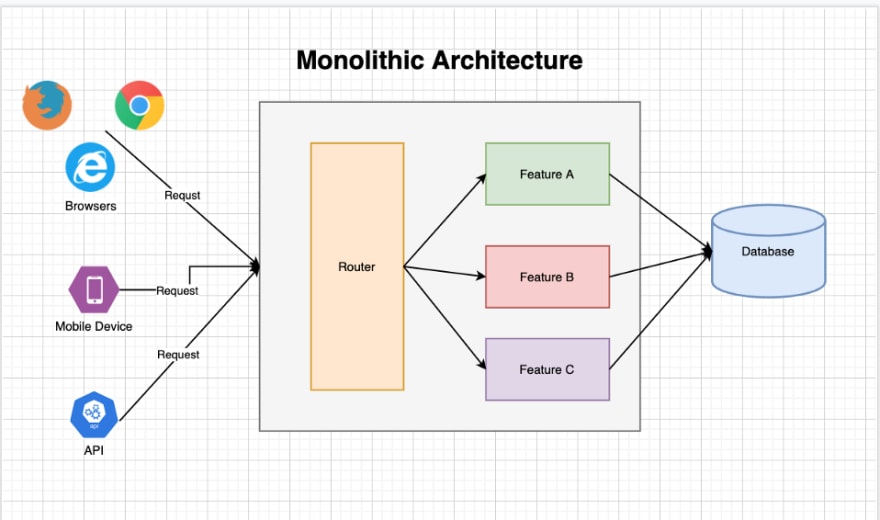 In short → a monolithic application, implements every feature of the application.

Microservices are design around the applications features.With each microservice operating independently from each other, but working together to support all the functionality of the application.

In the microservice application architecture, each feature has its own small service called a "microservice" with no dependencies on the other services or features offered as part of the application. 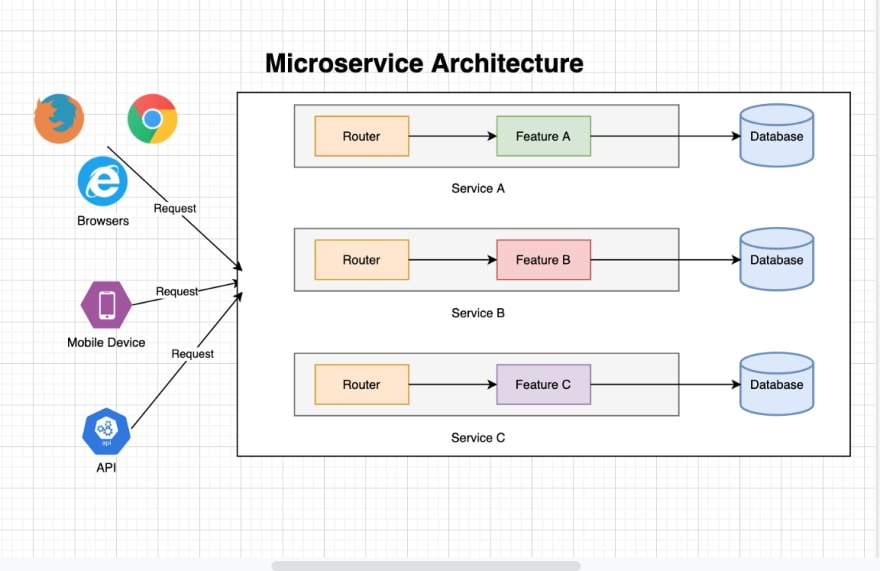 If each approach was taken to the extreme...

The important take-away is that each microservice is self-contained, without any dependence on the other microservices. Using more technical terms, the features assocaited with the application in a monolithic application architecture are tightly coupled together.

Microservices seek to address this architectural issue, by making independent servers or services ("microservices") that only are responsible for a single feature of the application.

In a microservice based architecture, routing, authentication, business logic, and database interactions, are all wrapped into small independent pieces ("microservices") and have can operate on their own. With microservices, no feature of the application is dependent on shared code or servers.

This is similar to the idea behind "thin vertical slices" ([here] is an explanation of thin vertical slices if you are not familiar with the approach) commonly embraced in agile methodologies as well as the single responsibility principle.

The problem with the monolithic approach

If a hardware failure occurs in a monolithic architecture, the entire application can be broken, since all of the features, routing, middleware, business logic, and database interactions all occur on the same system.

Similarly, since every feature is running on a single server, that server is using a large code base, that is shared between multiple developer/engineers and teams. As a result each feature is highly dependent on the others, and any addition or modification to the functionality of the application means modifying the code for the entire application.

The microservice approach sounds great so far, but there are some drawbacks.

Hopefully the difference between the fundamental paradigms behind application architecture (microservice vs. monolith) is a little clearer. However, I firmly believe the best approach to understanding anything in software development is to build it.

If that's of interest to you, look out for a follow-up tutorial demonstrating the microservice architecture.