An FAQ that explains and answers when to use which and why.

There's a common discussion among developers about how teams should use Git to make sure everyone is always up-to-date with the latest changes in the main branch. The typical situation this question arises is when someone worked on a new branch and then once the work is done and ready to be merged, the main branch had changes in the meantime in a way that the work branch is outdated and now has merge conflicts.

In my opinion, there's only one correct answer to this question. From my experience, the main reason why so many discussions arise around this topic is that there's a lot of misunderstandings out there about how merge and rebase differ from each other in this context and a general lack of understanding, what a rebase even is.

So I created an FAQ for my team which tries to clarify things. Let me share:

What is a merge?

A commit, that combines all changes of a different branch into the current.

What is a rebase?

Re-comitting all commits of the current branch onto a different base commit.

What are the main differences between merge and rebase?

In which situations should we use a merge?

Use merge whenever you want to add changes of a branched out branch back into the base branch.

Typically, you do this by clicking the "Merge" button on Pull/Merge Requests, e.g. on GitHub.

In which situations should we use a rebase?

Use rebase whenever you want to add changes of a base branch back to a branched out branch.

Typically, you do this in work branches whenever there's a change in the main branch.

Why not use merge to merge changes from the base branch into a work branch? 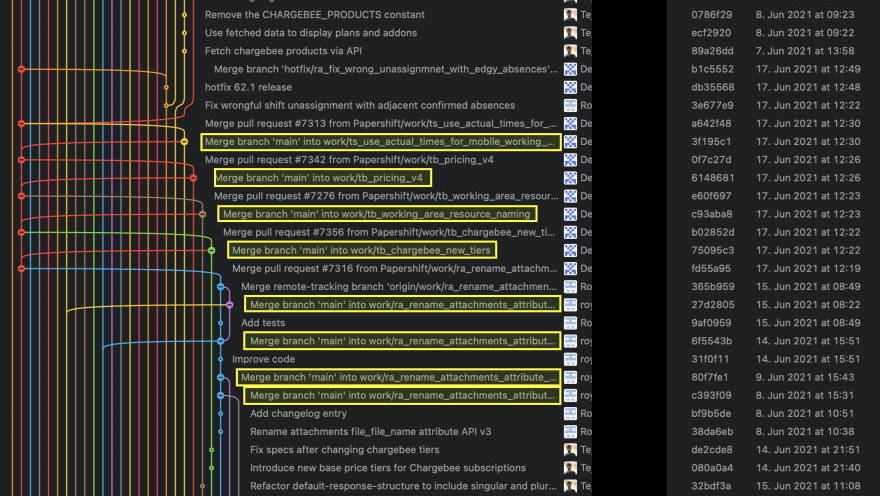 Note the many commits starting with Merge branch 'main' into ... (marked with yellow boxes). They don't even exist if you rebase (there, you will only have pull request merge commits). Also note the many visual branch merge loops (main into work into main). 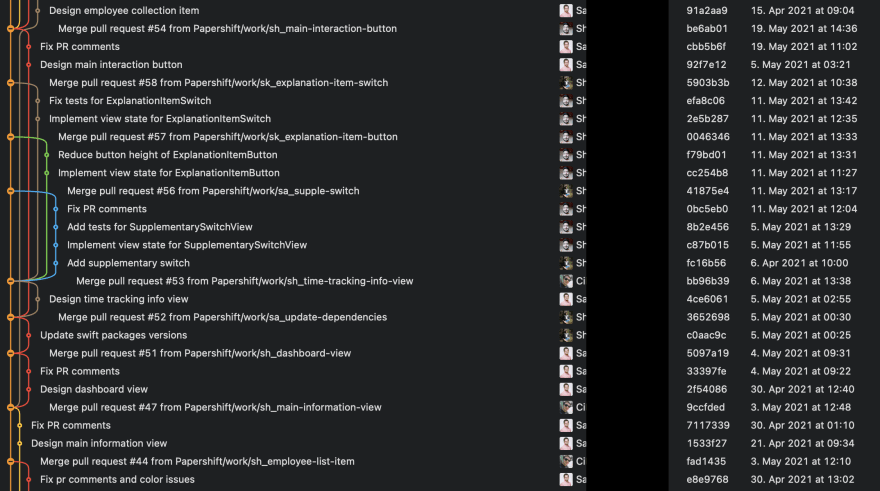 Are there any downsides / pitfalls with rebase?

I hope this FAQ helps some teams out there. Like ❤️ it if you liked it! 😉

_This article was written by Cihat Gündüz

Once suspended, jeehut will not be able to comment or publish posts until their suspension is removed.

Once unsuspended, jeehut will be able to comment and publish posts again.

Once unpublished, all posts by jeehut will become hidden and only accessible to themselves.

If jeehut is not suspended, they can still re-publish their posts from their dashboard.

Once unpublished, this post will become invisible to the public and only accessible to Cihat Gündüz.

Thanks for keeping DEV Community safe. Here is what you can do to flag jeehut:

Unflagging jeehut will restore default visibility to their posts.