This article has always stuck with me: 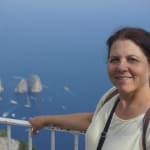 Promoted Out of Programming

It's an interesting read about a woman in the late 70s/early 80s, who enrolled in a COBOL bootcamp, became a programmer, and eventually found herself promoted out of programming. Obviously a lot has changed since then, but I think this is still how it generally works.

Have you been promoted out of programming? Or avoided a promotion because you want to continue programming? I'm curious how everyone feels about this.