Another excellent article on Python has me questioning why. 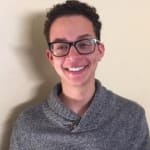 This is where the similarities end. writeln is not a substitute for print as we see next.

While multiple arguments can be passed in, no default or explicit separator exists. Instead we can wrap our call in an array to get access to some array ops.

In order to replicate the Python behavior, write was chosen because ln stands for line which is placed at the end. The exclamation mark is then included as the last argument.

This uses a tilde (concatenation operator) because append does not take additional parameters like write.

Python's choice to place a space between prints arguments likely lead to the choice of giving control of that separator. While the code to replicate Python's behavior is only minor, by making the default behavior meaningful to those wanting something readable printed to the screen Python required less familiarity of other language constructs.

If you instructed a new programmer "just wrap all your arguments in these brackets and call this join like so" as done in D, that new programmer would look at you and say "it's a computer why doesn't it do what I want instead of jumping through hoops.

Where I look at Python and see learning isolated tools. D's approach (also available in Python) is universally applicable. It can do a console and file, and other strings, networking, in some cases datatype.

Python tries to do the right thing but I think that opens the door for confusion because being explicit is not the norm.

Power up your ClickUp skills with Supabase, Figma, and DhiWise in a day.

Once unpublished, this post will become invisible to the public and only accessible to Jesse Phillips.

Thanks for keeping DEV Community 👩‍💻👨‍💻 safe. Here is what you can do to flag jessekphillips:

Unflagging jessekphillips will restore default visibility to their posts.