Coming back to my personal site after a few years has traditionally been a
painful process of trying to figure out how things are glued together. Prior to
my introduction to containerization and infrastructure as code, typically for my own personal site, I've been very ad-hoc about administration. I manually set up a digital ocean droplet, select an operating system, install packages, modify systemd, install a package or two, including my own codebase and forget about it.

What this means in practice is that software gets out of date. Specifically, node packages. In node land, 3 years is essentially a lifetime. Ghost went through two major releases. I came back and my import/export json file wouldn't even load into the latest version. I hate wasting time on stuff like this.

I started to containerize everything. I'm fiddling around with sqlite database, admin users and all manner of garbage. The templating system is archaic already and based on mustache with no nice way to integrate with modern post processing tools. Live reload isn't built in. You have to jump through hoops to automated database backup and restore.

Why am I putting up with this?

What do I need any of that noise for? I'm writing a few posts a year, usually for my own journaling purposes. I don't have multiple users. I don't need anything other than a text editor for writing posts. I don't need someone elses fancy theme. I'm a web developer.

So what do I actually need?

Ideally I'd also be able to share source easily with my "main" site, which is
really just a form of a resume about past works and some various links to social
media.

So what to choose?

I ended up with Hugo after messing around with gatsby, hexo, jekyll, ghost and a few other competitors. So far so good. It hits all the sweet spots associated with the above with minimal fuss. I seriously considered Gatsby, since I'm a React dev, but the core philosophy was just so muddled. Its not really a static site generator, and they force rather opinionated features on you. There's no javascriptless option, everything has to be a react component, and the tree in the base install was nasty. Hugo on the other hand, seems rather opinionless about the content. Its written in Go, which I have been meaning to touch for a while. I like the fact that it installs a single binary
and its not too difficult to pick up and add to your path. Its got a built-in, modern templating system that is minimalistic. Removing its built-in templating language from my source would be probably 10 lines, max. It supports Markdown
with Front Matter, which allows you to store and write markdown posts with a little bit of metadata which gets automatically swallowed. The "extended"
version of Hugo, which I'm using, supports scss, css minification out of the
box. Good stuff!

How does it look in practice? 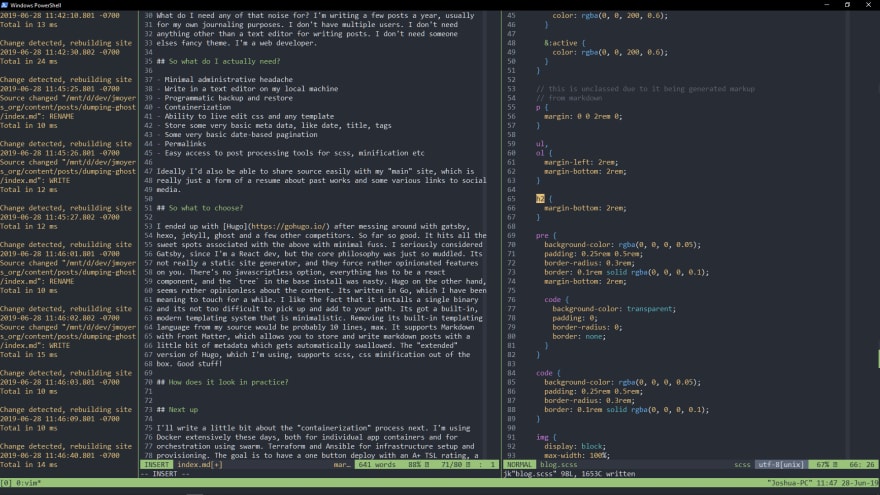 I'll write a little bit about the containerization process next. I'm using Docker extensively these days, both for individual app containers and for orchestration using swarm. Terraform and Ansible for infrastructure setup and provisioning. The goal is to have a one button deploy with an A+ TSL rating, a running nginx and hugo server on a single node swarm using docker.

What is the purpose of Node.js and why is it so useful?

Send and Receive SMS Messages With Node.js and Express

Once suspended, jmoyers will not be able to comment or publish posts until their suspension is removed.

Once unsuspended, jmoyers will be able to comment and publish posts again.

Once unpublished, all posts by jmoyers will become hidden and only accessible to themselves.

If jmoyers is not suspended, they can still re-publish their posts from their dashboard.

Once unpublished, this post will become invisible to the public and only accessible to Joshua Moyers.

Thanks for keeping DEV Community 👩‍💻👨‍💻 safe. Here is what you can do to flag jmoyers:

Unflagging jmoyers will restore default visibility to their posts.