You can think of variables as containers of information. Variables allow a way of labeling data with a descriptive name. They are not values themselves, but they contain values and represent them with a name.

You can assign different kinds of values to variables, such as strings, arrays and objects.

Variables are declared using one of three keywords in JavaScript var, let and const. Prior to ECMAScript 2015 var was used to declare all variables.

Many new programs will only use let and const but var is still out there.

Let's have a closer look at a variable declaration.

In the example above, a variable called userName has been declared using the let keyword, it has been assigned a value of Joe. 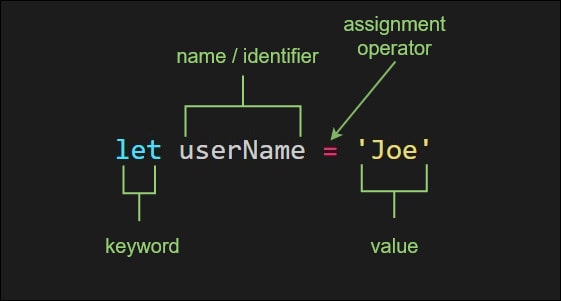 You can also use destructuring assignment syntax to create a variable and assign value from object literals.

Above we unpack the name and value of the engine objects size property.

Now that we've seen how easy it is to get started, let's have a closer look at naming JavaScript variables.

When considering a name, it's important that it is relatively descriptive and easy to read. In contrast to variables in mathematics, variable names in JavaScript programs are usually choosen based on readability and descriptiveness .

Variable names are called identifiers. Identifiers are sequences of characters that are used to identify a variable, function or property.

These identifiers are all acceptable:

You can also use Unicode letters and Unicode escapes sequences.

Although the variable names above are allowed, you'll generally try and choose variable names that are descriptive and therefor easy to read. Conventions like camel casing are followed to help readability.

These are good examples ✅

Although variable names are case sensitive, don't create multiples that share the same name but have different casing.

This would be considered bad practice 🚫

Variable names cannot use reserved keywords. Watch out for keywords like new, with, this these are reserved. You'll likely get a SyntaxError if you attempt to use these.

While that was a lot of information about naming variables, the overall goal should be creating variable names that are descriptive and easy to read. If you have a clear reason to steer away from common practice then try and be consistent in your choices.

An important difference between JavaScript and other languages like Java, is that in JavaScript, blocks do not have scope, only functions have a scope. So if a variable is defined using var in a compound statement (for example inside an if control structure), it will be visible to the entire function. However, starting with ECMAScript 2015, let and const declarations allow you to create block-scoped variables. Let's have a closer look at this.

Prior to ECMAScript 2015 and the let and const keywords, JavaScript didn't have block statement scope. So a variable declared inside a block is local to the scope that the block is in.

When using the let or const keywords to declare a variable, it will be block-scoped. That means it is only available in the scope of the containing block.

The let keyword declares block level variables. The declared variable is available from the block it's enclosed in as well as sub-blocks.

We can also declare a variable without assigning it a value. In this case the variable will be initialized with a value of undefined

const allows you to declare variables whose values are not meant to change. The variable is available from the block its declared in.

A variable declared with the const keyword cannot be reassigned. They are meaned to stay constant and attempting to reassign them will cause a TypeError

You'll see a TypeError like this in the console:

const variables must be assigned a value when first declared. If not declared with a value, it will result in a SyntaxError

Wow, that was a lot of information about JavaScript variables. But now you should have a pretty good understanding of JavaScript variables and how to use them. Remember that variables are not values themselves, let and const are block-scoped, watch out for reserved keywords and choose descriptive and easy to read names.

Time to say goodbye to Webpack?

Jordan Holt
I have a passion for web technology, learning, and creating interesting applications using JavaScript.
What you need to know about URLs
#beginners #learning #web
Fundamentals of Cloud Computing
#learning #cloud #codenewbie
JavaScript Scope: What is it?
#javascript #codenewbie #learning