I'll discuss how I create and manage my projects using Git/GitHub. Also, I'll be tackling how I use GitHub's project boards, issues, and pull requests.

Note: This is NOT a comprehensive tutorial about Git/GitHub so I won't dive deep into those topics.

Like anyone who first started using Git, when I start working on a project, I just create a GitHub repository then commit directly to the master branch. I don't branch out from master whenever I'm working on a feature or a bug fix.

Tho as I started growing, meeting new devs, and gain experience in working as a developer, I started to rethink my way of creating projects. Since most of my commits are "Fix typo", "Refactor code", and commits like "Welp" lol, my git logs ended up kinda messy. So with that, I decided to re-work my workflow 😉

PS: Although this is my GitHub workflow, you can also do it on GitLab or other git hosting providers.

For this post, I'm gonna create the frontend of a book database app wherein I can store books that I've read and books I'm planning to read.

Why create a specific app?

I just prefer explaining my workflow using an existing app, rather than an app called "my-awesome-project" as I did in the past. Tho I'm not gonna finish it hahaha or will I? I'll just use it for explanations. I'll also be using VS Code.

a. To get started, let's create a folder for the repository and set up the initial files.

In this case, I named the folder hondana-app and worked on a NextJS-Styletron-Baseweb initial setup. 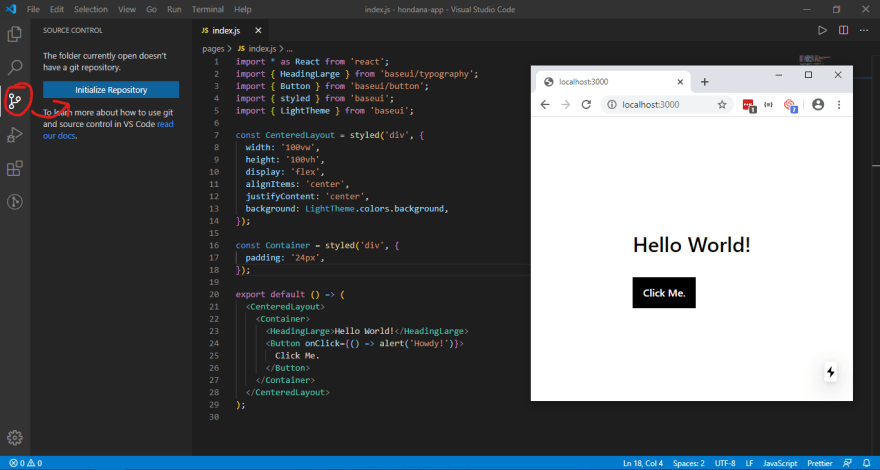 b. Then initialize the project as a git repository using either the "Initialize Repository" button found in VS Code or by running git init in a terminal.

c. Afterward, let's do an Initial Commit like so: 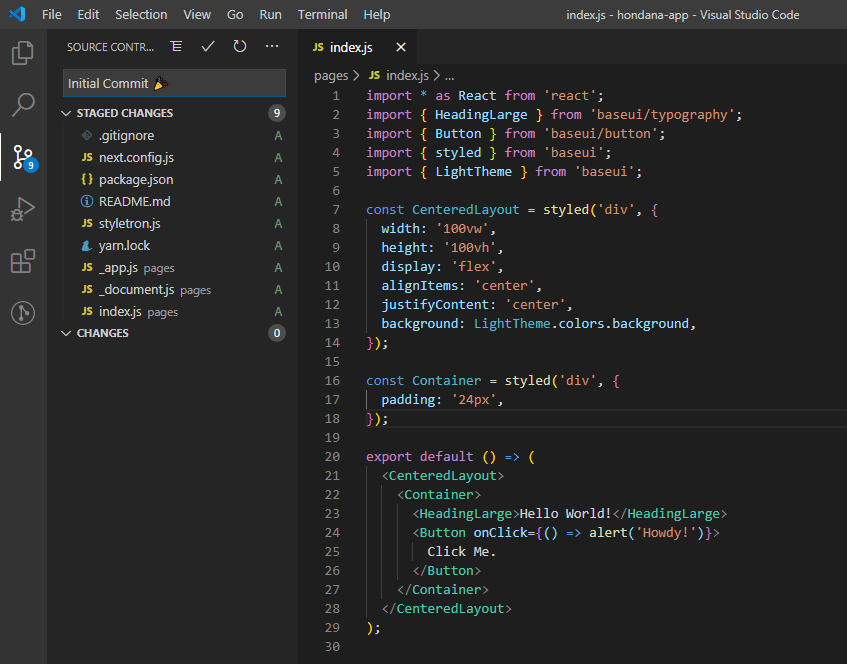 d. After that, it's time to use GitHub 😁 Btw I just google translate "bookshelf" to Japanese, in case you're curious about the name, hondana app. 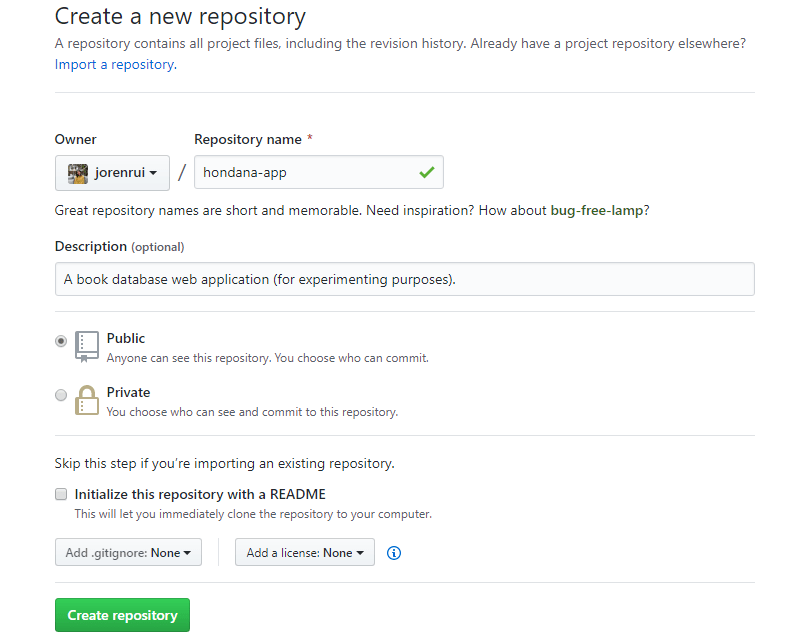 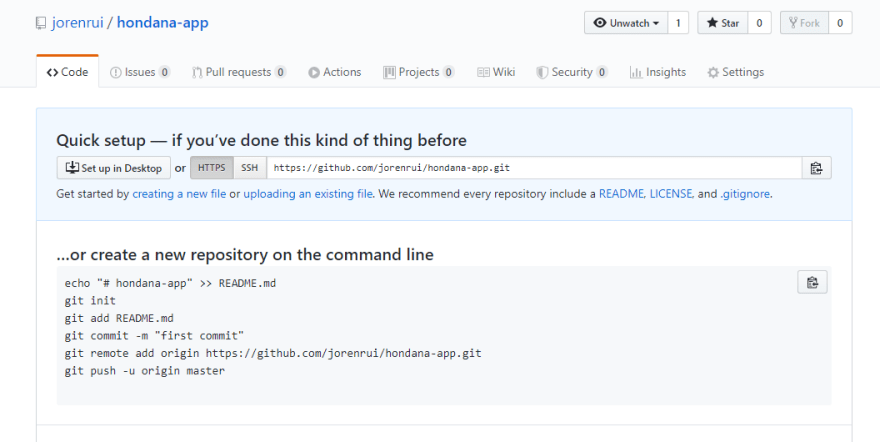 f. Now we are all done setting up! 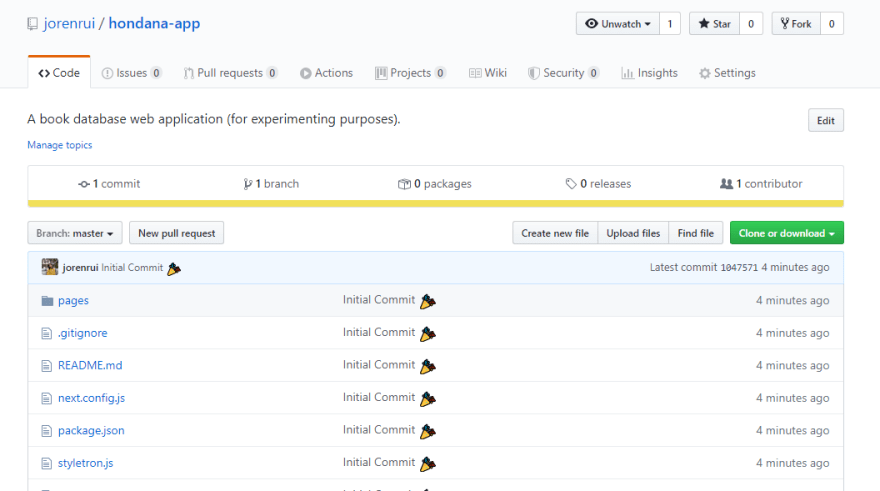 In GitHub, you can create project boards to manage your repository. With this, you can put all your notes and tasks (issues and pull requests) in a single place.

For now, I'm going to name it as Hondana App. This project board is gonna be a roadmap for the app. Tho you can create multiple project boards for a single repository. For example, you may create a project board for your app's documentation, frontend, backend, etc. 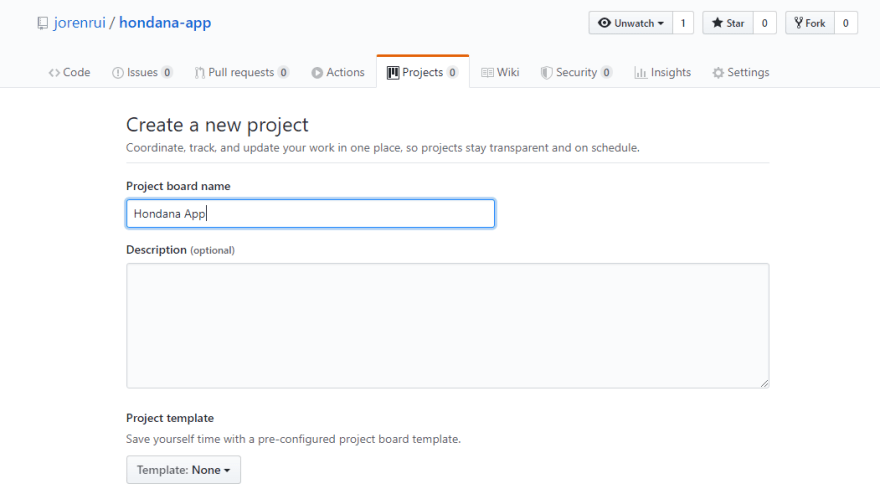 GitHub also has a project template in which you can use. A Kanban Board has a Todo, In Progress, and Done column. As for me, I prefer using an automated kanban with reviews. With this, when issues and pull requests are automatically moved from To Do, In progress, Reviews and Done. Tho if you're the only one on a project then I suggest the automated kanban since there will be no code reviews. 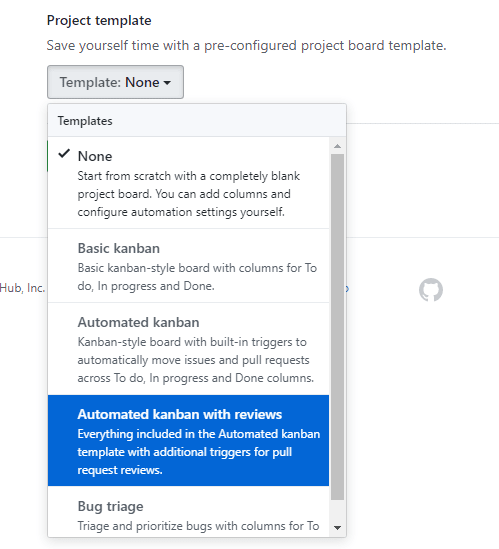 Since this board is an automated one, we don't necessarily need to touch it. We just need to links our issues and pull requests to this board. I'll show you how to do it in the next part.

Since the project board is all set up, let's now move on to creating some issues. Issues can either be tasks that you need to do or bugs that your application has.

Tho before creating issues, first we need to create Milestones. These can be the goals you have for your app. It can also be the versions of your app. As for me, I use milestones in versioning my app.

For example, for the initial version of the hondana app, I plan to finish the following features:

For the second version of the app, I plan to finish the following features:

With this, all the issues and pull requests related to that version can be organized into a single milestone.

a. To start, go to the Issues Tab of the repository, then click Milestones.

b. After that, click Create a Milestone to create one.

c. Then input the title of your milestone. Here, I put v1 as the milestone's title. You can also add a deadline in you want. 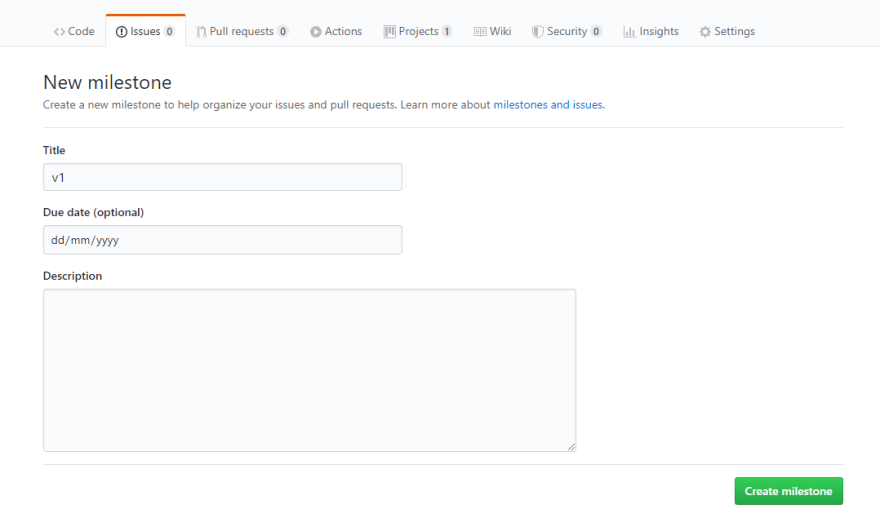 d. With this, you can now view your created milestones under Issues tab > Milestones.

e. By clicking the milestone, you can easily see all the issues that are linked to it. 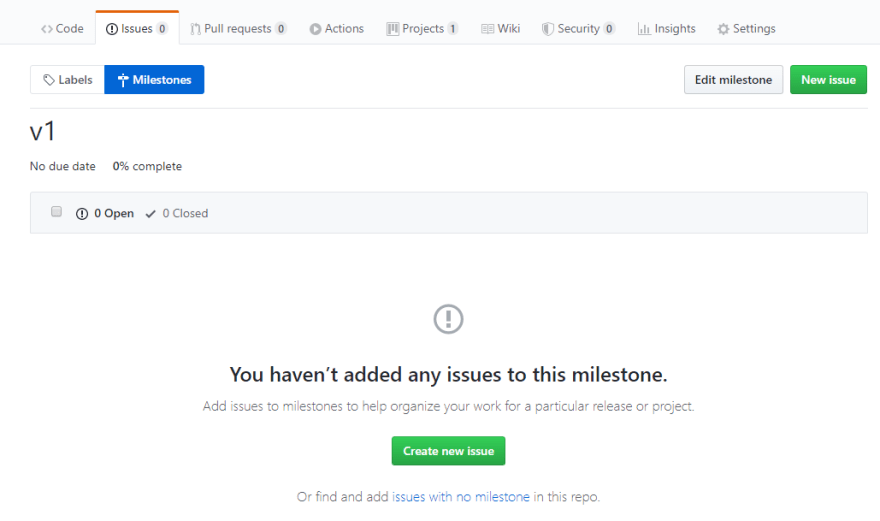 In creating you can either create it by going to the Issues Tab of your repository, like the image shown below, or by going into a specific milestone. 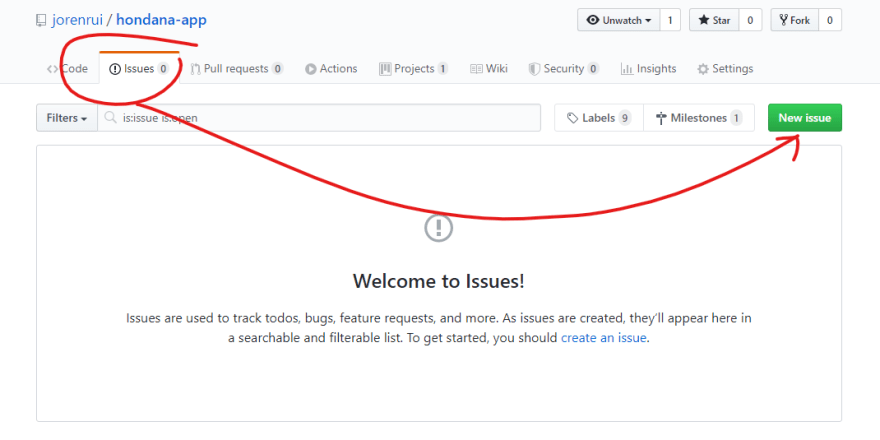 In creating issues, a friend of mine taught me how I can categorize them:

To understand them a bit more, let's create our first issue. 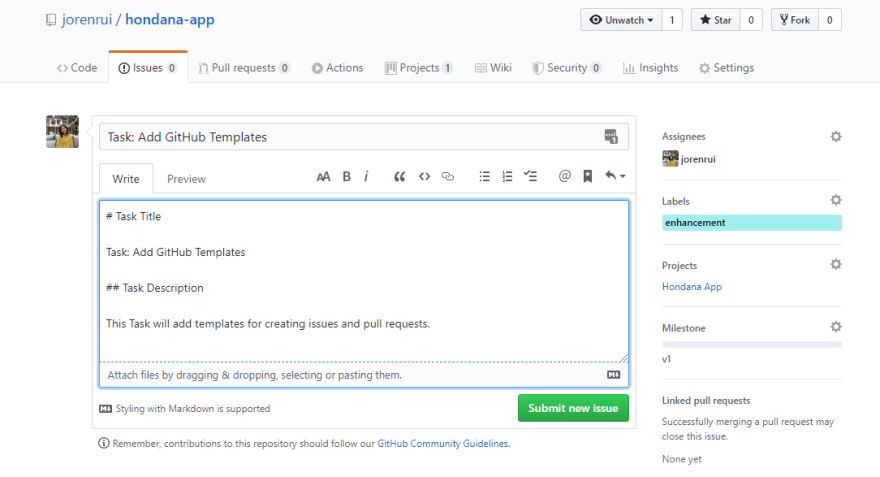 In this part, I'll show you how to create GitHub templates, but first, let's create those issues. 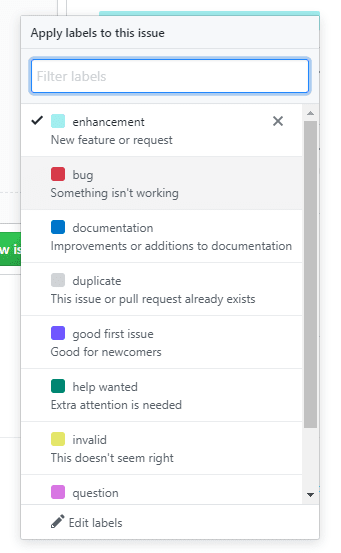 Since the task issue is done, we can now move on to the Epic Issue. 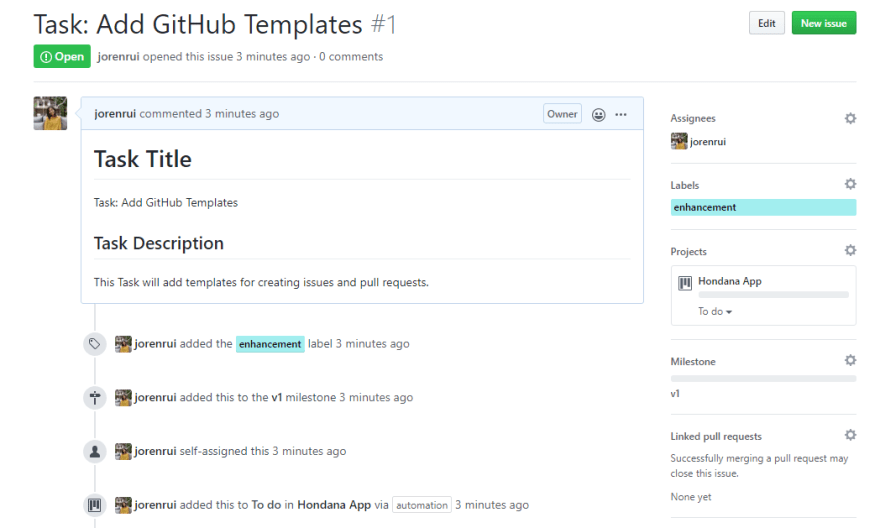 Now, let's create an epic issue regarding the library page of the application. 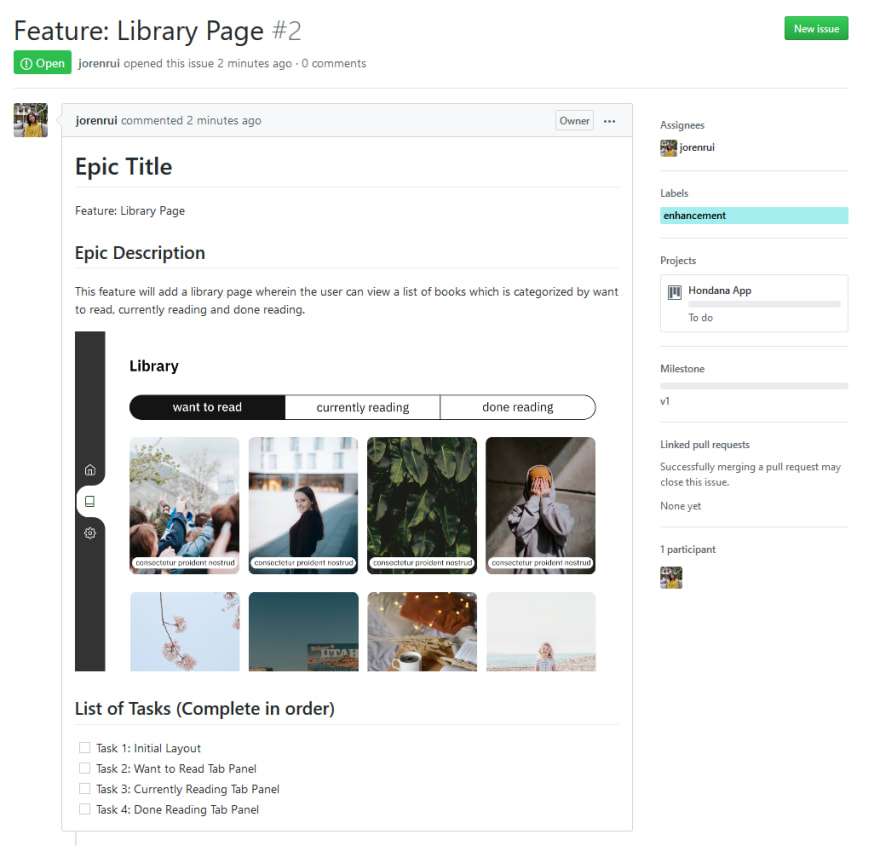 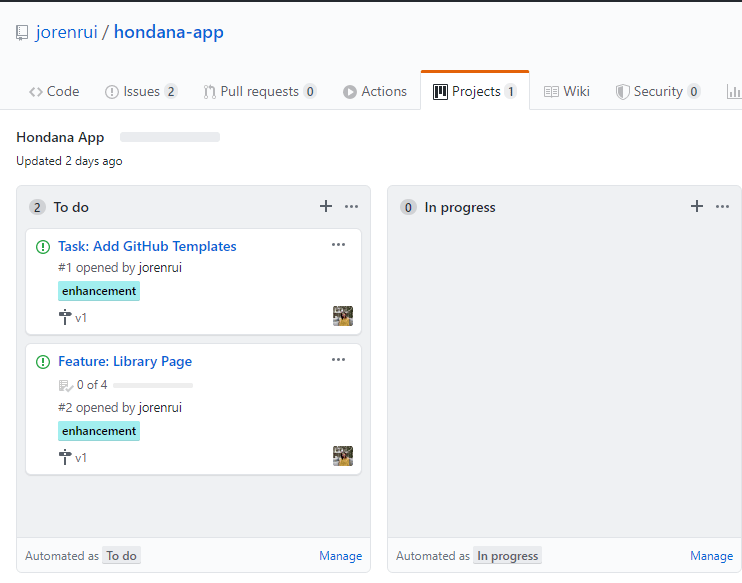 Since the epic issue is created, let's now create those tasks.

In these tasks, we can now link its epic parent which is Feature: Library Page #2. 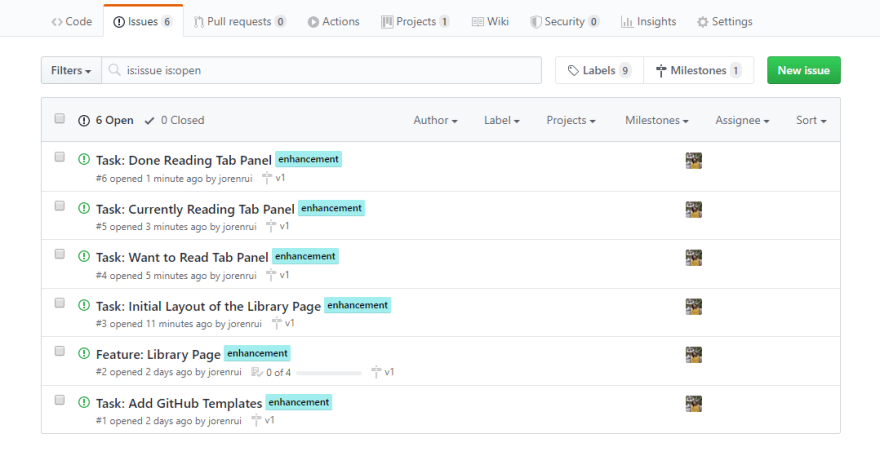 After creating all the tasks, we can now update the epic issue and link the tasks. 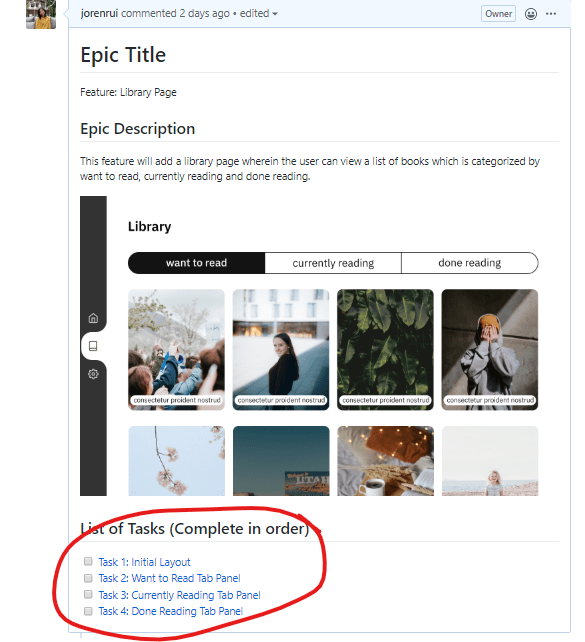 After that, you're all done.

Since the Hondana App has no bugs yet, let me show a sample bug in my create-project repo. 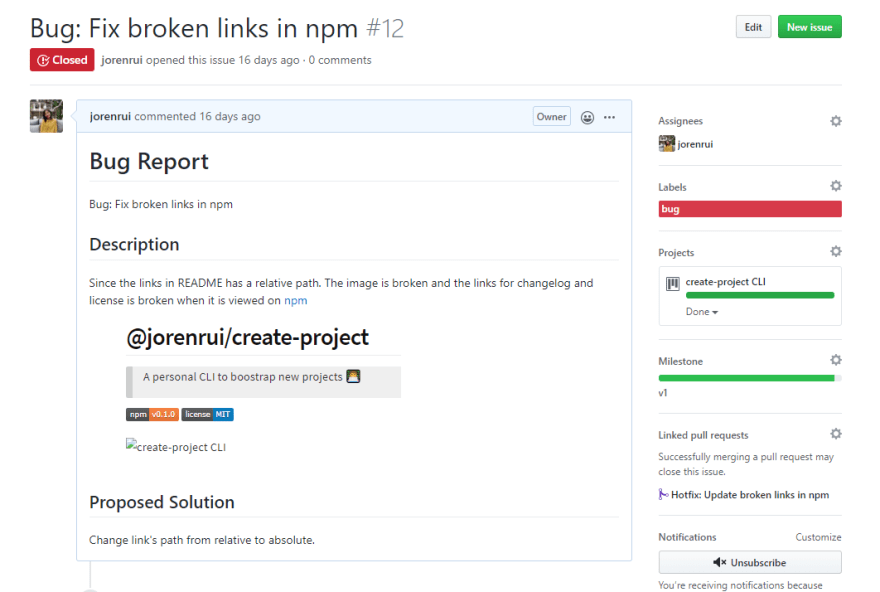 Now it's time to show you how to create GitHub templates! So in this part we'll be working on this issue: Task: Add GitHub Templates #1.

Whenever I'm working on a feature request or bug fix. I first create a branch from the master branch (sometimes it can be the develop branch).

So in this example, I'll create feature-github-templates from the master branch:

Then you'll automatically be switch to your newly created branch. After that let's create the template files.

To create some GitHub templates, create a folder named .github in the root directory of your app name. That's where your templates will reside.

Then create a folder named ISSUE_TEMPLATE. This is where the templates for the task, epic, and bug issue will reside.

Then create the files for the issue templates and the pull request template. 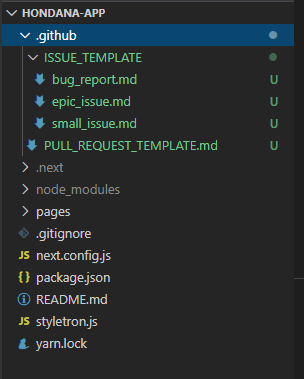 The small_issue.md will contain the following:

The epic_issue.md will contain the following:

The bug_report.md will contain the following:

Lastly, the PULL_REQUEST_TEMPLATE.md will contain the following:

After making the files, we make now commit the changes made and push our newly made branch along with our commits to origin.

When feature-github-templates has been merged with master. You'll now see the templates whenever you create an issue or create a pull request:

Now that we're all done with creating GitHub Templates, we may now create a Pull Request.

When you check out your repository, your recently pushed branches are shown. You may click the Compare & pull request button to create a PR.

Or you may go to the feature-github-templates branch and click pull request like what is shown below:

Then let's now create a Pull Request, we'll be comparing it to the master branch. 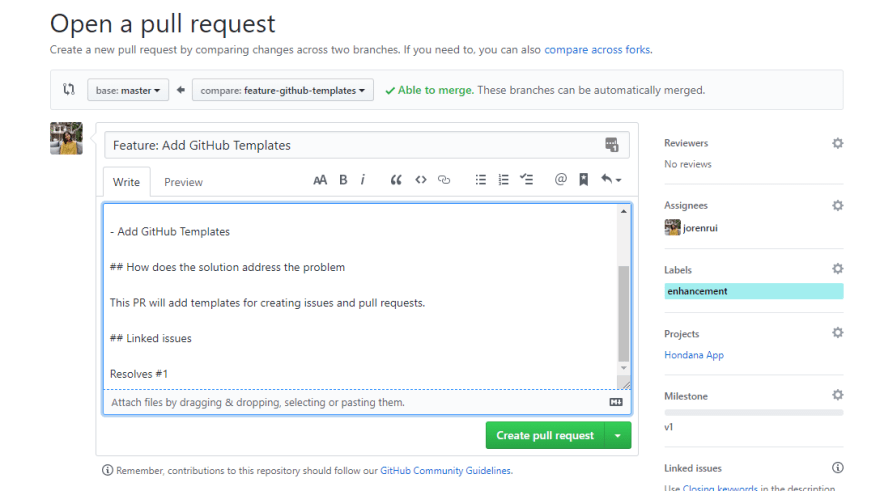 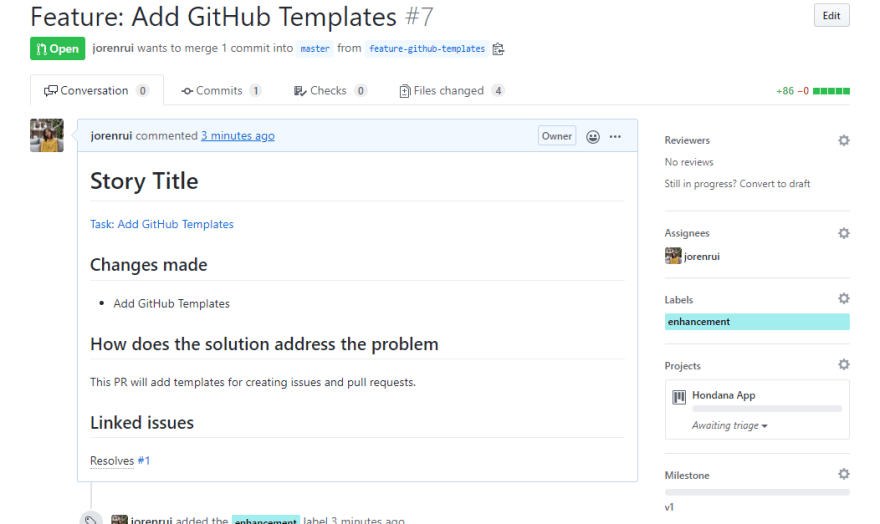 If you have reviewers, then you're code will be subject to approval.

The format of the Pull Request is:

When I merge branch I prefer Squash and merge. This action squashes the branch into one commit before merging. I'll explain in a bit as to why I prefer this. 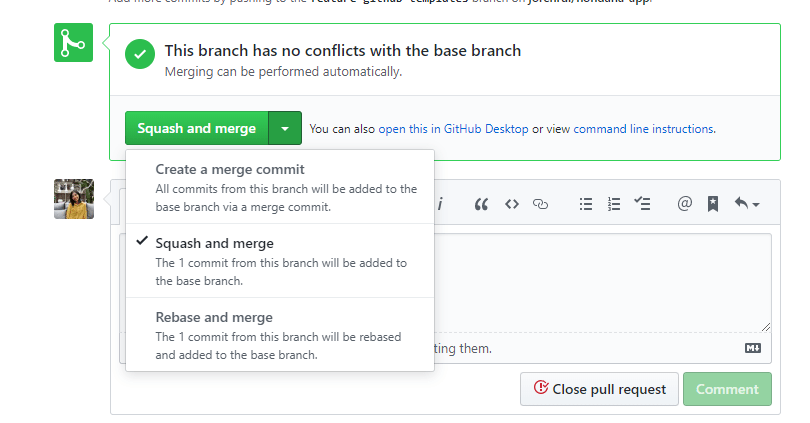 EDIT: I don't use squash and merge anymore since it greatly affects the history. Now, I prefer a normal git merge with commit.

After picking Squash and merge, you'll be able to add the commit message. Like shown on the image below:

For the commit message:

After merging it, it will now create the merge commit and the PR in the project board will automatically be moved to Done. Then you may now delete the branch.

Then delete the branch from my local repository: 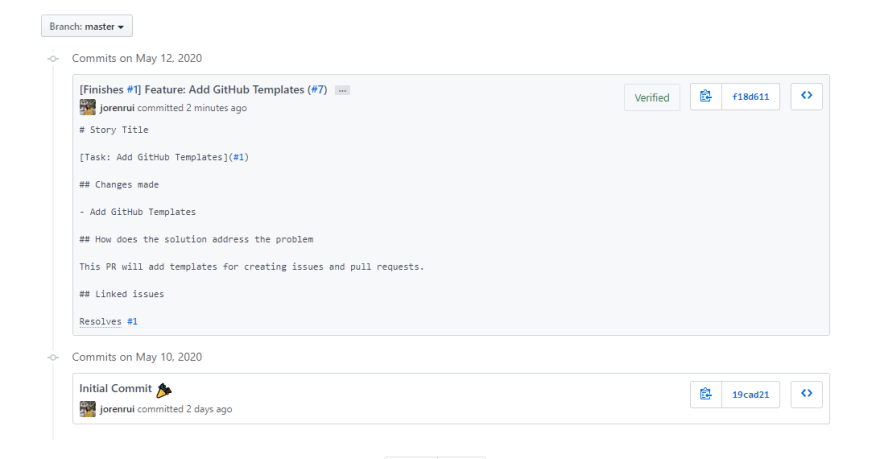 This is useful when you're creating a changelog and when you're working on a legacy project that has tons of features. You will easily see the changes and the info regarding each commit. This is why I prefer squash and merge. Also, I tend to create commits like "Refactor code" and "Fix typo", so seeing a clean log of commits is refreshing.

That's just one way of managing your project. You can make it your own by customizing it like adding some tests or GitHub actions. It's all up to you. Experiment and see what works best for you 😉.

Thanks for reading and happy coding 👩‍💻

🔴 From being super shy, to my first LIVE Coding session

Joeylene Rivera
Building http://sutle.io • Uses code to solve problems.
git is not the end of history
#git #github #healthydebate #watercooler
Should developers study 20 hours a week after work?
#career
What was your win this week?
#discuss #weeklyretro

Once suspended, jorenrui will not be able to comment or publish posts until their suspension is removed.

Once unsuspended, jorenrui will be able to comment and publish posts again.

Once unpublished, all posts by jorenrui will become hidden and only accessible to themselves.

If jorenrui is not suspended, they can still re-publish their posts from their dashboard.

Once unpublished, this post will become invisible to the public and only accessible to Joeylene Rivera.

Thanks for keeping DEV Community 👩‍💻👨‍💻 safe. Here is what you can do to flag jorenrui:

Unflagging jorenrui will restore default visibility to their posts.