In this article I will share my team's experience with setting up an infrastructure on BitBucket Pipelines to facilitate integration tests.

I will go over the challenges we faced when orchestrating our service's external dependencies as docker containers and making them communicate with each other both locally and during the CI integration tests.

Specifically, I will outline the docker-in-docker problem, how to solve it both locally, locally within docker & in CI and how to actually put it all together via docker-compose.yml & and a bit of Bash.

Our particular experience was with Kafka, but the broad ideas can also be applied to other stacks.

For our current (greenfield) project my team is developing an application which is processing events from a Kafka stream. To ensure the velocity of the team doesn't decrease with the advancement of the project, we wanted to setup a suite of integration tests that will run on each commit during the CI testing phase within BitBucket Pipelines.

We had some specific requirements on how to ensure we can easily run the tests as often as possible - not only during the CI phase, but also locally:

Before we continue, I will reiterate the three environment we'll be addressing:

Our service is a Python 3.7 app, powered by Robinhood's Faust asynchronous framework. We use Kafka as a message broker. To ensure the format of the Kafka messages produced and consumed we use AvroSchemas which are managed by a Schema Registry service. 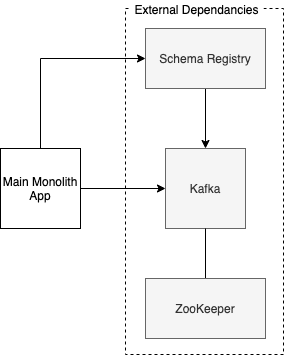 The kafka/docker-compose.yml has the definitions of all the necessary external dependencies of our main application. If run locally via cd kafka && docker-compose up -d, the containers will be launched and they will be available on localhost:<service port> - we can then run via our native Python the app and tests against the containerised services.

A peculiarity when configuring the kafka container is the KAFKA_ADVERTISED_LISTENERS - for a given port you can specify a single listener name (e.g. localhost for port 29092). Kafka will accept connections on this port if the client used kafka://localhost:29092 as the URI (plus kafka://kafka:9092, for the example above). Setting 0.0.0.0 instead of localhost causes kafka to return an error during launch - so you need to specify an actual listener hostname. We will see below why this is important.

As per the Bitbucket documentation, it's possible to launch external dependencies as containers during a Pipeline execution. This sounded appealing at first but it meant it would lead to difficulties when setting up the test infrastructure locally as the bitbucket-pipelines.yml syntax is custom. Since it was a requirement for us to be able to easily have the whole stack locally and have control over it, we went for the approach of using docker-compose to start the dockerised services.

To configure the CI we have a bitbucket-pipelines.yml with, among others, a Testing phase, which is executed in a python:3.7 container:

The run-integration-tests.sh script will be executed inside a python:3.7 container when running the tests via docker (locally & on CI) - from this script we launch the kafka & friends containers via docker-compose and then start our integration tests.
However, doing so directly would mean that we will have a "docker in docker" situation which is considered painful. By "directly" I mean launching a container from within a container.

A solution to avoid "docker in docker" is to connect to the host's docker engine when starting additional containers within a container instead of to the engine within the container. By connecting to the host engine, sibling containers will be started, instead of child ones. 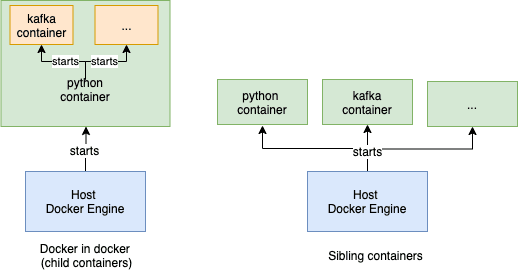 The good news is that this seems to be done out of the box when we are using BitBucket pipelines! So it's a concern just when we're running locally in docker.

The pain & the remedy

There are two main problems:

In the root of our project we have a docker-compose-test.yml which just starts a python container and executes the scripts/run-integration-tests.sh.

When the above container launches, it will have docker installed and the docker commands we run, will be directed to our host's docker engine - because we mounted the host's socket file in the container.

When running the containers locally

It's cool that we can avoid the docker-in-docker situation but there's one "gotcha" we need to address :)

How to communicate from within one sibling container to another container?

The solution we found is to go through the host and then use the port of the kafka container which it exposed to the host.

When running the containers on BitBucket

Now there's another gotcha, as one might expect. When we are in CI and we start our containers, host.docker.internal from within a container does not work. Would have been nice if it did, right... The good thing is that there is an address that we can use to connect to the host (the bitbucket "host", that is).

I found it by accident when inspecting the environment variables passed to our build - the $BITBUCKET_DOCKER_HOST_INTERNAL environmental variable keeps the address that we can use to connect to the BitBucket "host".

Now the above is actually the significant findings that I wanted to share.
In the next section I will go over how to actually put together the files/scripts so that it all glues together in all of our three envs.

Gluing it all together

To handle the kafka listener part we make use of the docker-compose files extend functionality. We have the "main" kafka/docker-compose.yml file which orchestrates all containers and configures them with settings that will work fine for when using the containers from our local python via localhost. We also added a simple docker-compose.ci.override.yml with the following content:

This file will be used when starting the kafka & friends when running tests within local docker & CI - if the $BITBUCKET_DOCKER_HOST_INTERNAL is set, then its values are going to be used - we are in CI then. If it's not set, the default host.docker.internal is used - meaning we are in local docker env.

Our tests/app are configured via env vars. Our run-integration-tests.sh looks something like this

The script can be used in all of our three envs - it will set the KAFKA_BOOTSTRAP_SERVER (our tests' configuration) env var accordingly.

FYI In the Makefile example couple of paragraphs ago, I've omitted the ci.override.yml file for brevity.

Thanks for reading the article - I hope you found useful information in it!
Please let me know if you know better ways to solve the problems from above! I couldn't find any, thus wanted to save others from the pain I went through :)

Take your Serverless Functions to new speeds with Appwrite 0.13

How to Dockerize a Docusaurus v2 application

How to install Apache APISIX Dashboard with Docker in Windows

Georgi Tenev
What do you look for on a team page?
#career #discuss #startup
Why quitting job articles are so popular?
#webdev #discuss
Do You Need Docker Desktop For Linux?
#docker #linux #devop