Peter Norvig, the legendary Google mogul and AI titan, wrote a python essay to solve every Sudoku puzzle 10 years ago. Back then, he may not have expected that his code will inspire so many other posts and to be ported to so many different languages. For JavaScript, the latest version of the solver that I found was @einaregilsson/sudoku from 2014 .

I thought it would be interesting to create a react app that uses Peter Norvig's solver ideas and adds some learning layers to the UI.

Here are some details from the design document that I used to create the app. Let's start.

If you want to check it out before reading, go to the LIVE DEMO

or the github repo jsolano/react-sudoku-solver

The idea was to create a sense of flow in the UI, where users can easily understand how to use it. 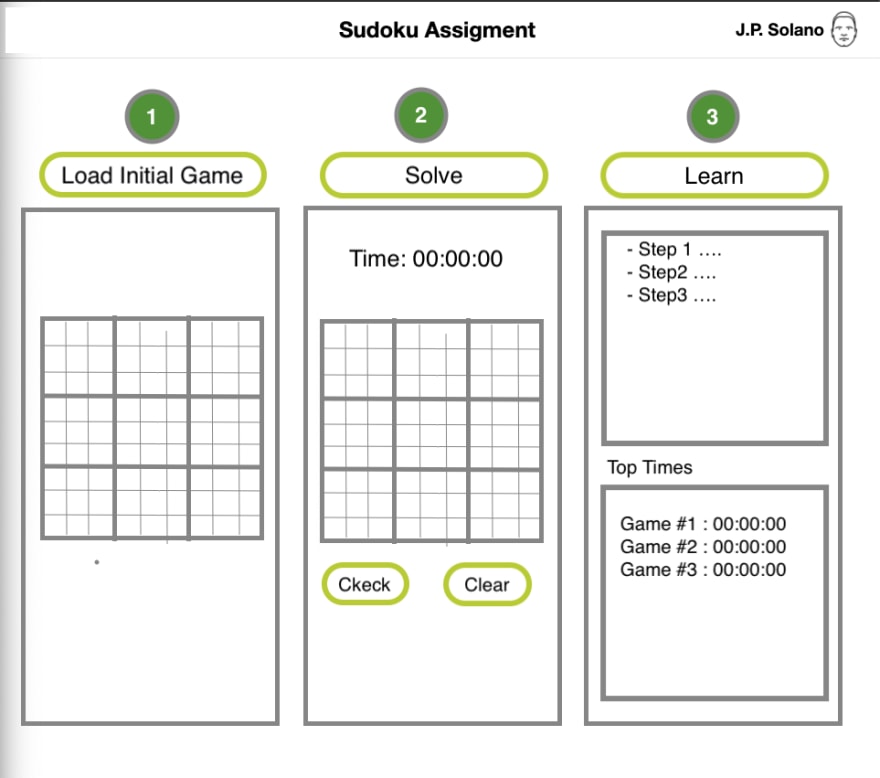 There are two main modules of the app: 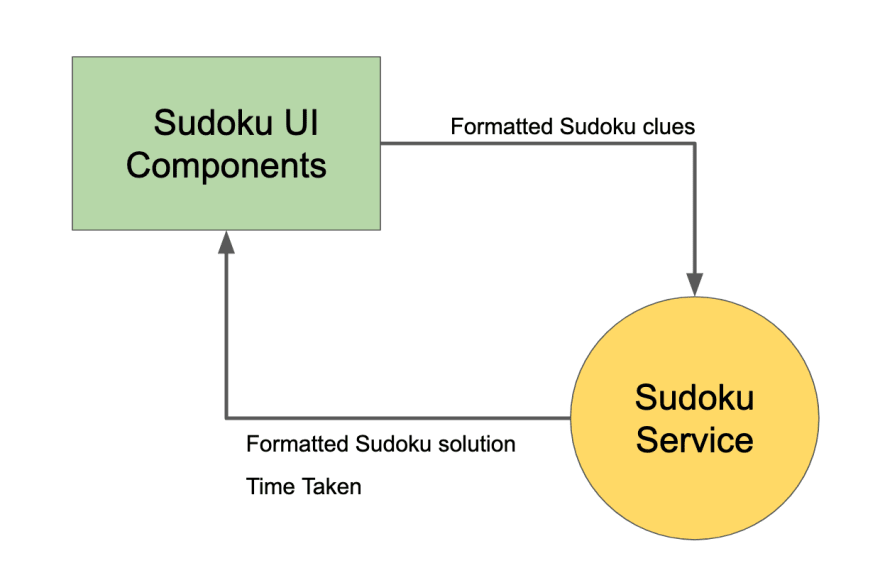 First, I made a raw version of the basic JS components and utilities: 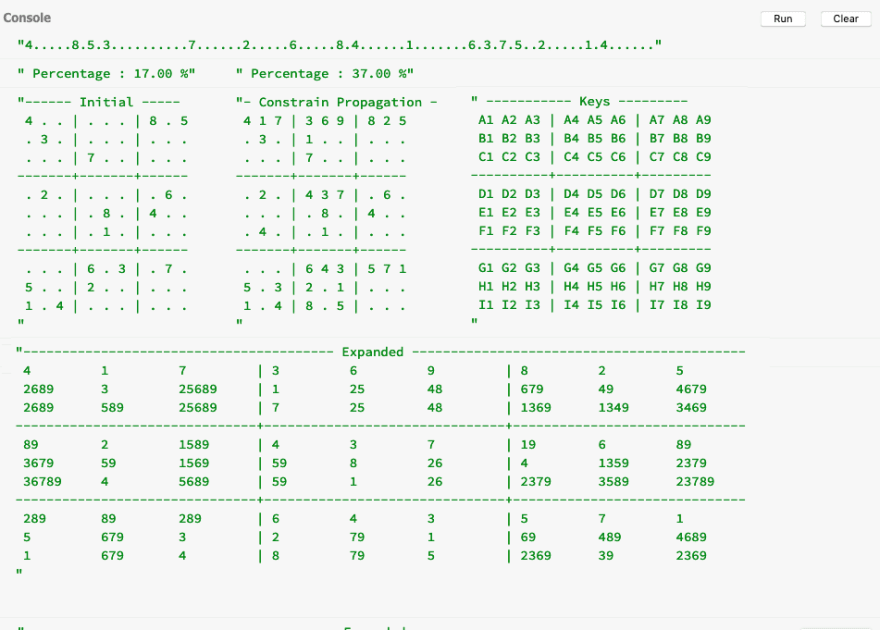 Then, I started working on the solver service using JEST for testing. 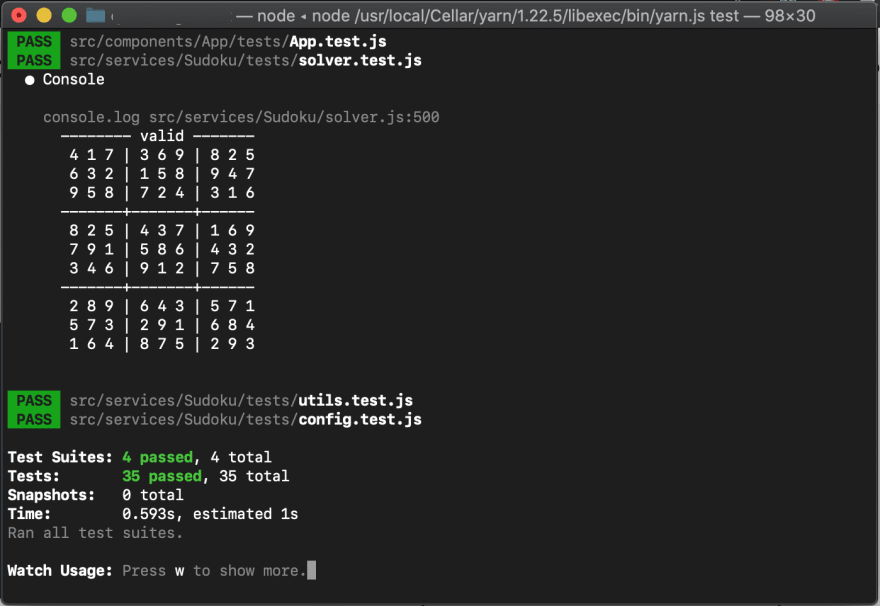 Later, I implemented the react components for the board, modal, messages and buttons, and then integrated with the solver service using react hooks.

Here's when things started to get interesting. On one side, the UI learning column helped me understand how the solver was working and how to improve the implementation. But, after I ported Peter Norvig's algorithm, which uses a backtracking search strategy and solves ALL SUDOKUS, I realized the learning column was useless because in the search of a solution, it created temp steps that were not valid. I needed to change my approach.

I could've just removed the learning feature and lived with just a simple solver but instead, I chose to implement other solving strategies that provided the detailed solutions.

I did my research about Sudoku solving strategies, and there were more than 38 options. I was totally hooked. See more here

Creating a react app that uses human solving strategies (for learning purposes and for fun), and only applying Backtracking Search as the last resort.

So now, the app will apply this strategies :

Also, it comes with a prevention for infinity loops and a spinner while it's solving the puzzle. 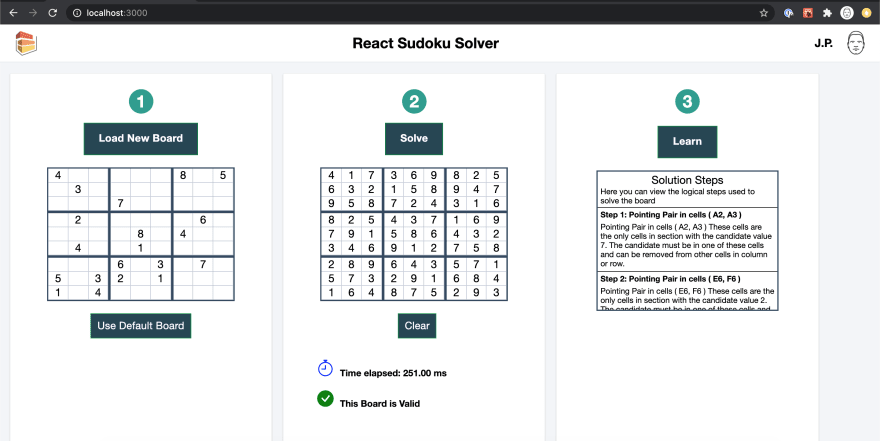 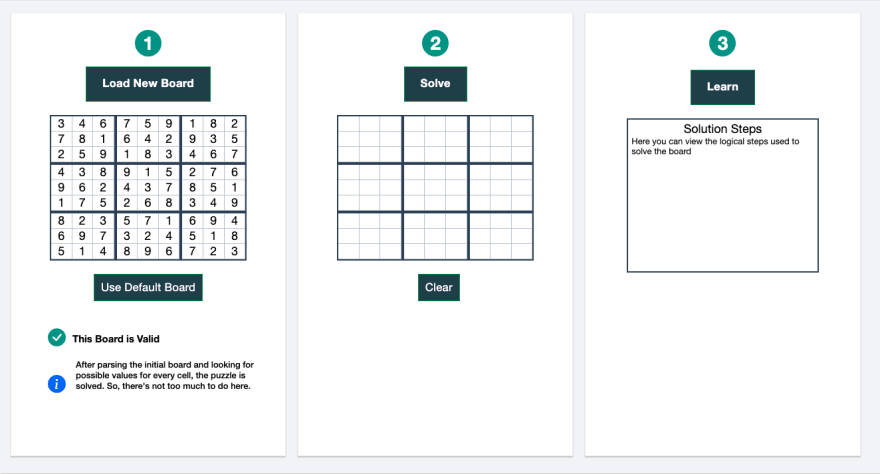 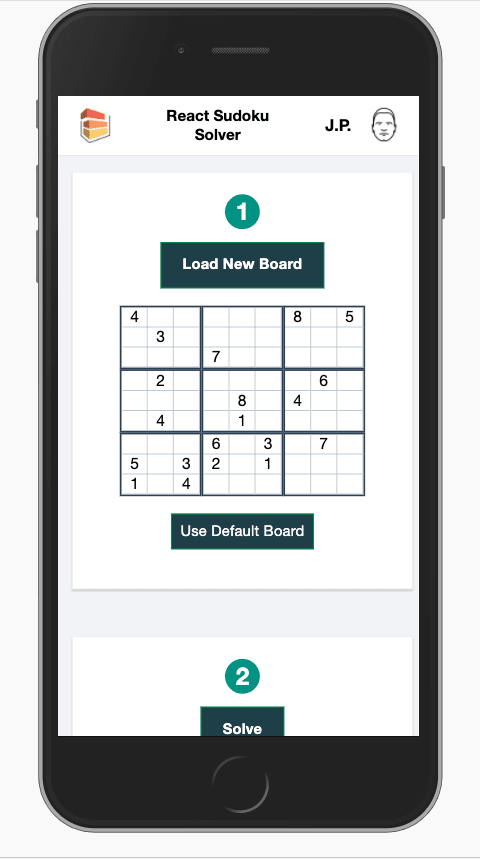 If you are a Sudoku fan and want to collaborate, take a look of the github repo. Join me in implementing the other 34 strategies!

The enemies of people who work with ideas are not the people with the opposing ideas. They're those who want to ban the discussion altogether. -Paul Graham

Once suspended, jsolano will not be able to comment or publish posts until their suspension is removed.

Once unsuspended, jsolano will be able to comment and publish posts again.

Once unpublished, all posts by jsolano will become hidden and only accessible to themselves.

If jsolano is not suspended, they can still re-publish their posts from their dashboard.

Once unpublished, this post will become invisible to the public and only accessible to J.P. Solano.

Thanks for keeping DEV Community 👩‍💻👨‍💻 safe. Here is what you can do to flag jsolano:

Unflagging jsolano will restore default visibility to their posts.