For a project at work, I needed to learn some simple 3D CSS techniques. So, I decided as a side project to build an Xbox Series X and S model in CSS to learn how to accomplish this.

In this small demo you can choose between both Xbox Series models. When you select the unselected model a transition occurs. Moving your cursor to either side of the model will slightly change the view.

You can find the demo here (looks much better in its full glory here):
https://codepen.io/tumain/full/poyqVeb

I thought it would be interesting to cover how I created the demo and some of its visual aspects; including:

To begin, I looked at how to create a cube. I used this guide to construct one. I recommend reading the article if you're unfamilar with CSS cube creation, but in short; I created a .cube class. This .cube class has six elements within, each representing a face of the cube: top, right, bottom, left, back, front. Altering the translation and rotation of each cube face via 3D transforms, allowed me to create a cube.

I then recorded the dimensions of each Xbox and sampled each of their colours from the image below. 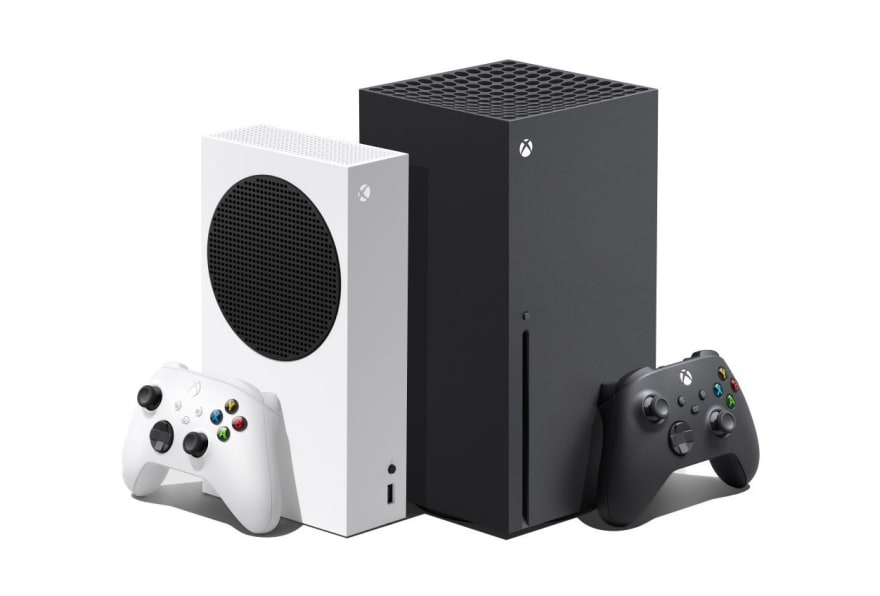 Each model would share the same CSS variable that would be changed upon transition; so I created CSS variables to store this data.

I updated the existing CSS widths and heights I used from the guide, to use these CSS variables. I then tweaked the 3D transform of the model until I was satisfied with the view.

Transitions between both models

Loaded with the colours and dimensions of each model, I created two classes, putting the colours per face of the Xbox (box) model. One for .series-s and the other for .series-x. This class is applied to the body tag, depending which model is selected.

The next part of the puzzle was to update the CSS variables depending on which model was selected. I executed this by using JS' style.setProperty method. For example, if I wanted to change the width (--width) of the model on screen I would do this:

In my JS I store an object holding the dimensions of each model. Here's an example of the Series S.

I created a function where you can pass in these properties and it updates the dimensions of the model.

To trigger this I made a clickable X and S element at the bottom of the page. If I wanted the S model, I simply call the setProperties method with the seriesS object and remove the current class from the body tag and add the class I wanted; series-s.

After getting the transition between colours and size working, I added the visual elements of each model in.

On the S model there is a large black circular vent using the class .circle. This is simply a black circle (border-radius: 50%) absolutely positioned on the front face of the model.

To achieve the transition where it shrinks when the X model is selected I created a x-scale-0 class. This class is a child of .series-x and simply sets the scale of the element to 0. So when the Series X is selected the scale down occurs.

Likewise there is a .s-scale-0 class, which works the other way.

At the top of the S and X models there are circular vents. There are also circular vents on the S' model front. To achieve this pattern I used a background; utilising radial-gradient and background-size.

The following is used for the S' front circles.

I tweaked the background size to increase/decrease the size of the circles, depending on the scenario.

The Xbox logo is made up of three circles:

For points 2 and 3, I tweaked the width and height a lot to get the desired outcome.

I added this at the last minute just to show off that it is 3D. This uses the CSS variable --view, that we mentioned at the start.

I firstly added event listeners onto the body, tracking mousemove and mouseleave. mousemove slightly changes the CSS --view variable depending on the cursor position; whereas mouseleave resets the --view to its initial variable.

Hopefully the commented code above makes sense. The value '75' was used because it felt like a healthy offset to move the camera to the left or right.

The mouse leave event just resets the model to its initial view, so when the cursor goes off the screen the view resets.

Then we also need to add the event listeners.

And there you have it. Hopefully me going into the depths of how the scene was developed has been an interesting read. Whilst it isn't the most complex of scenes, I thought it would be useful to go into the detail of how I created some of these visual effects, since this was the first time using 3D CSS.

Once suspended, jtumain will not be able to comment or publish posts until their suspension is removed.

Once unsuspended, jtumain will be able to comment and publish posts again.

Once unpublished, all posts by jtumain will become hidden and only accessible to themselves.

If jtumain is not suspended, they can still re-publish their posts from their dashboard.

Once unpublished, this post will become invisible to the public and only accessible to Justin Alexander.

Thanks for keeping DEV Community 👩‍💻👨‍💻 safe. Here is what you can do to flag jtumain:

Unflagging jtumain will restore default visibility to their posts.