TL;DR: If all tests are mocked, you don’t know if your code really works, you only know that, theoretically, it is supposed to work if the integrations adhere to the contract you expect.

Mocking, stubbing, or maybe—even better—dependency inversion, they can simplify testing and make your code easier to change, but can they cause problems too? Let’s see.

Take a look at this test where we are saving a file using an external file service. 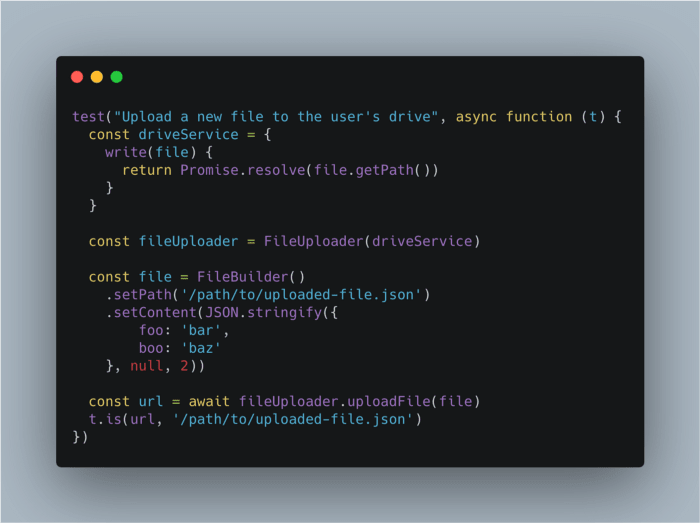 Can you determine if this is a useful test?

The answer is that it most likely isn’t going to ever catch any bugs. Let’s see if we can determine why not.

Now, what about even further down the line? What if something changes with the actual drive server that we want to integrate with? We certainly won’t catch those errors because we aren’t ever making a call to it.

Unfortunately we will also have to update this test whenever we change how fileUploader and driveService interact.

So not only is the test brittle, it’s just not very useful. Further, in a typed language it would be completely useless since the compiler would catch these types of errors during compilation.

So, how can we make this test better? The test can become useful if it actually makes the service call to the drive server. Not the internal drive service object, but to a real drive server.

Immediately you should be objecting, “My unit tests will take forever to run and become extremely brittle if I am making real service calls!” If you said that then you are absolutely right. This test is best served as an integration test.

Integration tests may not be run as often as unit tests, but they should—at the very least—be run before integrating your changes into the code base. See what I did there? Integration tests run when you integrate.

Still, the problem exists, how could I realistically run all the servers needed for my application to function? Starting them up can be expensive, not to mention the data stores, managing ports, authentication, and everything else that goes into creating a fully-functioning system.

Take a look at this simple system diagram. It represents a very stripped-down version of the system in the example test from earlier.

You can see that all we’re interested in here is testing the integration of our “File Service” with the external “Drive Service” that belongs to another team. In this case we’re not trying to run a full end to end test.

But what are we actually testing?

Oops! Here, as shown in green, only the file service was tested. We wanted to test if our File Service and its connection to the Drive service are actually working. So instead of writing a mocked version on our end, we will look for a way to obtain a testable version of the drive service. 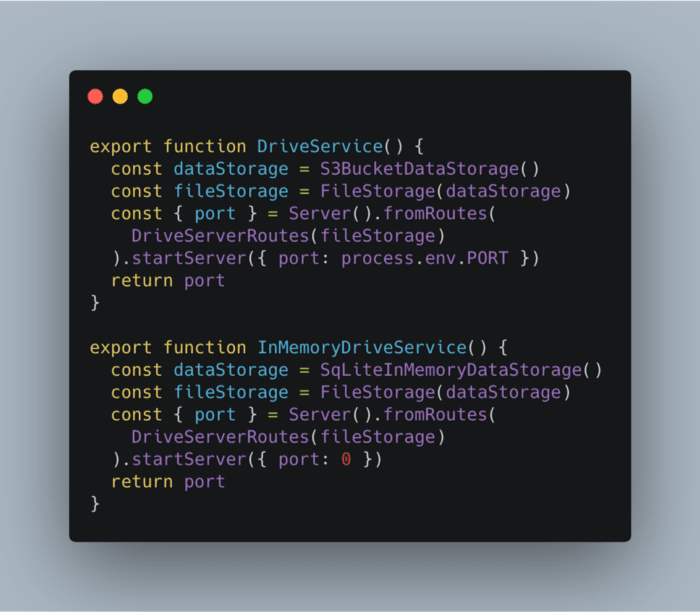 The above code represents a sample isolated server implementation. You can see that it is very similar to the real server implementation, except that it uses an in-memory data store instead of a real file storage device. It even uses port 0 to ensure that an ephemeral port is used, further increasing the stability of it’s tests. 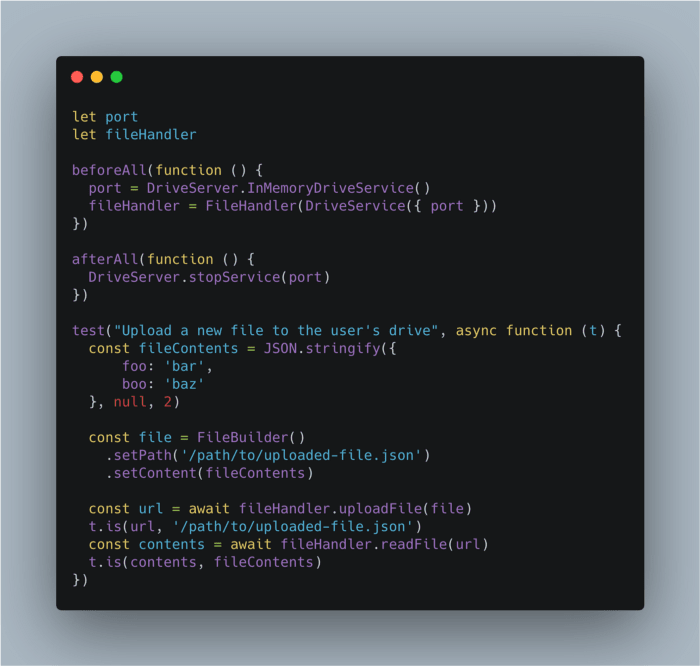 Now, is our test more useful? Since we made the call to the real Drive Server api (even though it saves to a different storage device, the API and business logic remain the same) we will know if our integration breaks.

Even better, not only were we able to test what URL it returns, we were able to test if the content was saved as expected. Our test will actually tell us if file saving works!

Look at our system diagram again. You can see in green the services that are being tested. This time we are testing the file service, the drive service, and, most importantly, the connection between them.

It isn’t realistic to expect that this set of tests will be run every time we change a line of code—that expectation is reserved for unit tests—but this test is still lightweight enough to run on each code check-in. Executing the integration test in this fashion will ensure that your main branch(es) will have not only correct business logic, but also working integrations with other services.

A fallback when an isolated service just isn’t possible

Sometimes you really may have some kind of environment or build-time constraint that makes an isolated server impossible. If that’s the case then you could look to fake APIs as a fallback.

Remember, we’re still talking about integrations here—code that interacts with other services. You may have noticed the code contained two Drive related entities: “DriveServer” and “DriveService”. The DriveServer was the actual service that belongs to the third party. We were using their in-memory version to test our integration with their service. The DriveService is an API that knows how to interact with a DriveServer. This API also belongs to the Drive team.

Thankfully they understand that not everyone can use their isolated in-memory server, so they also created a fake version of their API. Take a look. 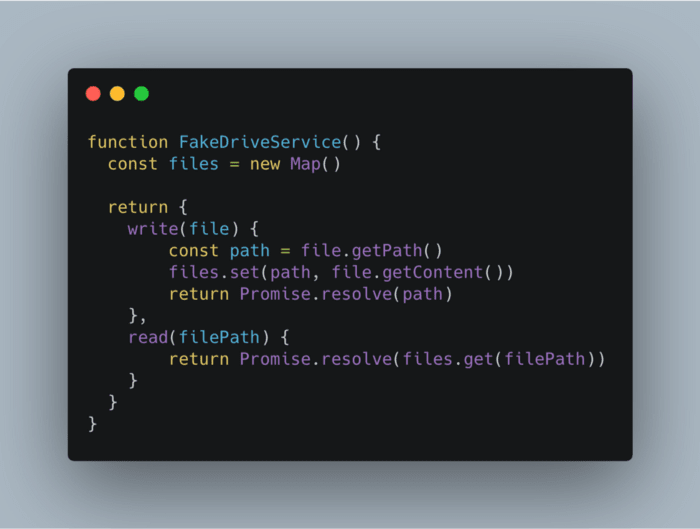 This FakeDriveService is an implementation that the Drive Team could provide to anyone who uses their service. They are saying “If you test with the FakeDriveService you can trust that the real DriveService will work. We run tests against both to ensure that they work the same.”

This implementation is obviously even lighter than the isolated server, so what’s the drawback? Let’s refer, once again, to our system diagram.

While we are technically testing the connection mechanism we aren’t actually touching the Drive Service. Our test is built on trust, not actual verification. The trust is that the fake service really does work the same as the full service. In many scenarios this could be good enough, but if you have a production critical system you may need a better guarantee.

Still, this test is better than the original mock function that we started with. That mock function was completely untrustworthy to the point that, I would argue, it actually tricked us into thinking we were safe from bugs, but in reality we had no idea. Our tests will now have to change if the Drive Service changes. In that first mock scenario we wouldn’t have had to change our tests, it would have tricked us into thinking that our code still worked, even when it was broken due to an API change.

This post was directly inspired by posts that I recently found in Google’s “Testing on the toilet” blog. I wanted to take their idea and reframe it in the lens of a JavaScript application. Please see the links below to read their original posts.

The views and suggestions here are my own, not my employer’s. I in no way intend to represent them through this post.

I’d love to hear from you. Please feel free to reach out to me on Github or Twitter.

This is a repost, the post originally appeared on www.justindfuller.com.