Well, this wasn't born as a blog post at first, but, I wanted to let the world now that I was able to build a Chrome extension! (I didn't publish it, tho)

We will create an extension to highlight (with a border) Google ads on the search results page (so they are identifiable by anyone!). We can do that by hand, but, we are developers, so, let's make an extension for it!

Let's start by creating a folder that will hold our extension's brain. I'll name it visible-ads (you can name it whatever you want it).

Now that you have the folder, cd into it and create a manifest.json file (every chrome extension should have this file since this is the presentation card for them). Let's create them and open it into your editor of choice.

On that file, we will add the following information (for now):

Now, let's create our first JS file. We'll name it background.js. This file will contain some logic that will run in the background when our extension starts. As before, here's the content and we'll talk about it after:

Let's see some details of it:

How does the browser know this file should be run in the background? manifest.json to the rescue! Add the following lines to your manifest.json file: 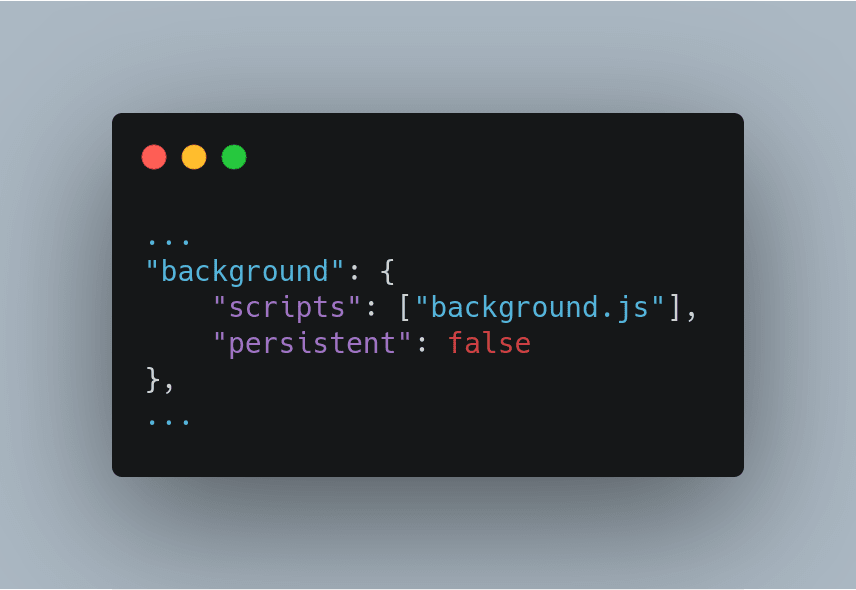 Per Google's Developer Docs, to use the declarativeContent or storage APIs, we should request them. Let's do this by setting up which permissions our extension needs. Where can we do this? In the manifest.json file!. Go ahead to it again, and add the following lines: 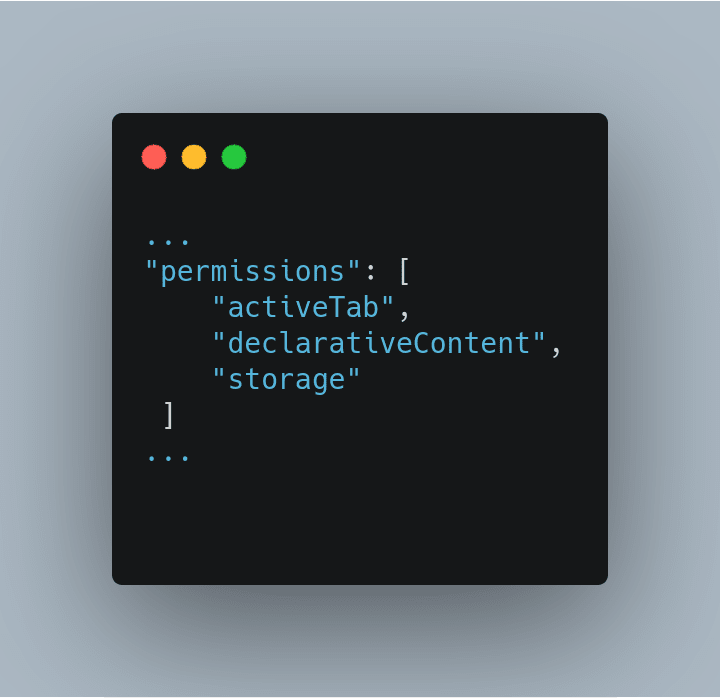 (Note: for simplicity, we're adding the activeTab permission here, but we'll use it later)

Our extension needs something a user can see and interact with! So, let's create a new file called action.html (no CSS, I promise) and let's add some code to it: 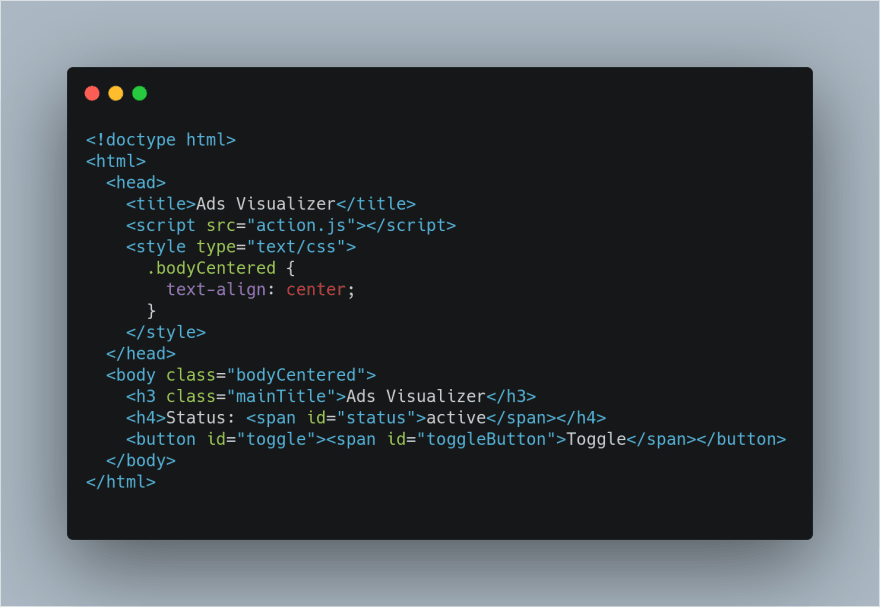 This file will produce something like this (so you know how ugly it is): 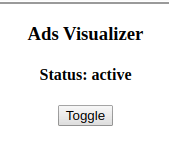 Let's add some lines to manifest.json file so the browser knows this is our "landing page" (well, a popup is what it'll be): 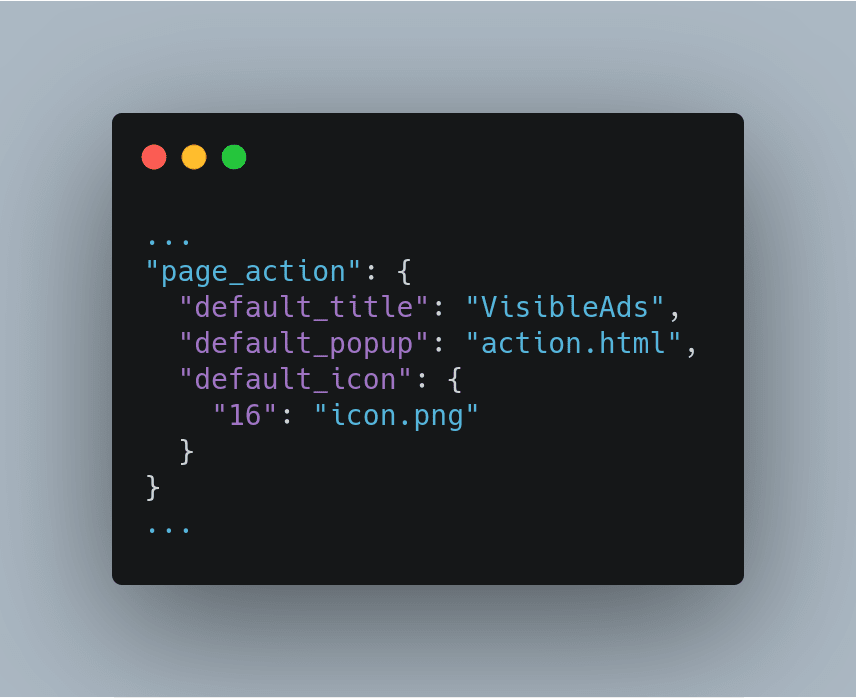 As you may notice, we are including a script called action.js, but we haven't done it yet! So let's create it! Create a file called action.js. This part will be the main point of interaction between our extension and the Tab's DOM.

At the first line, we'll call document.addEventListener('DOMContentLoaded... to make sure our script only runs when everything's ready (to avoid some undefineds there, ugh). Let's see the first half of the file's content: 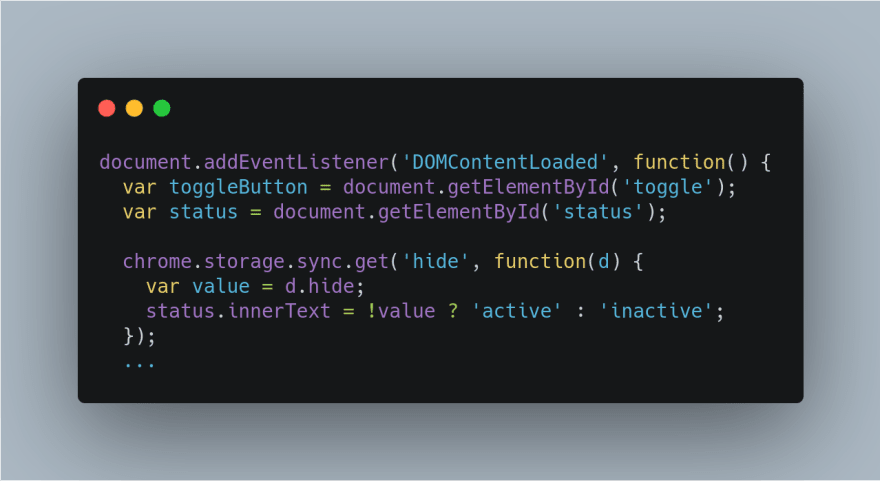 The second part of the file is this: 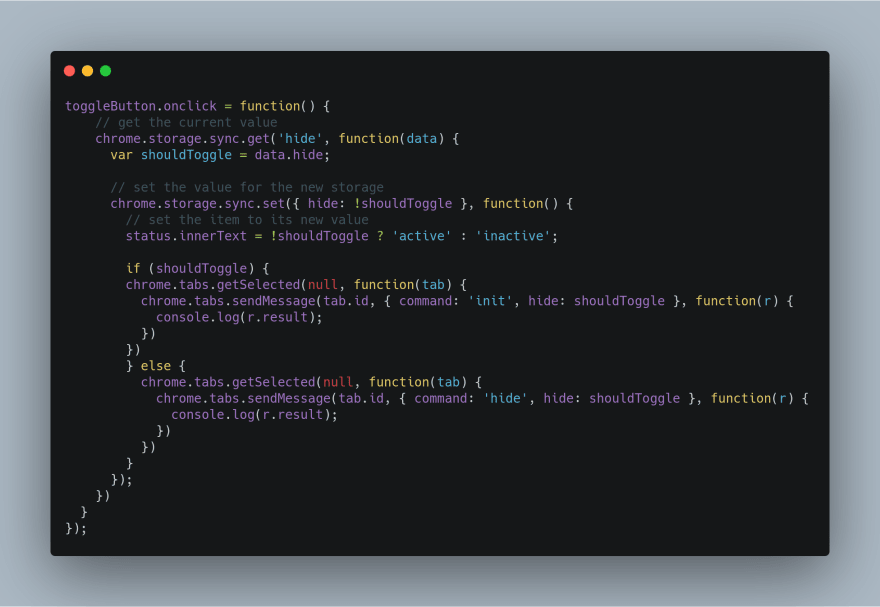 WAIT A MINUTE! We don't have any content script!!! 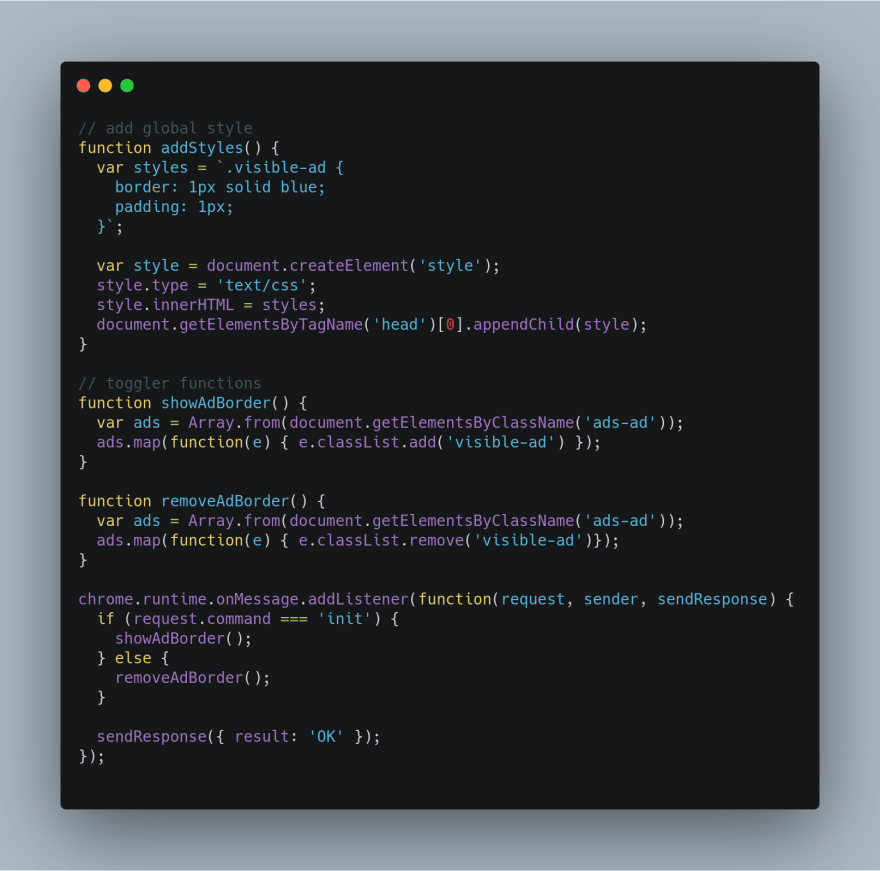 Now we have our content script! Wooo! Yay! But, wait, again, how does the browser know that this is a content script? Let's go again to manifest.json file and add the following lines: 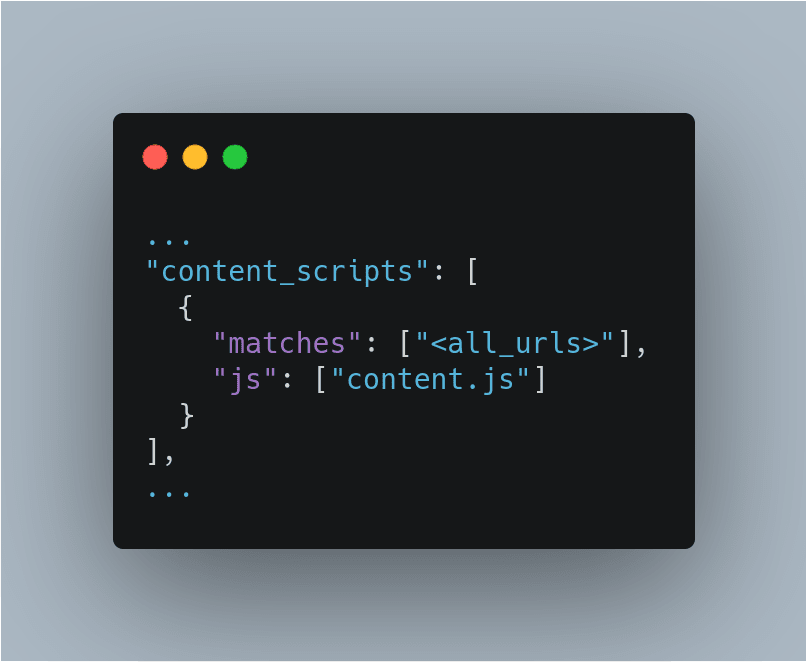 Now we have a working extension! Woo!

Now, let's add one last thing. We really want this behavior to be enabled by default, isn't it? So, let's do that by setting up an onload event listener on our content.js file! Add the following lines: 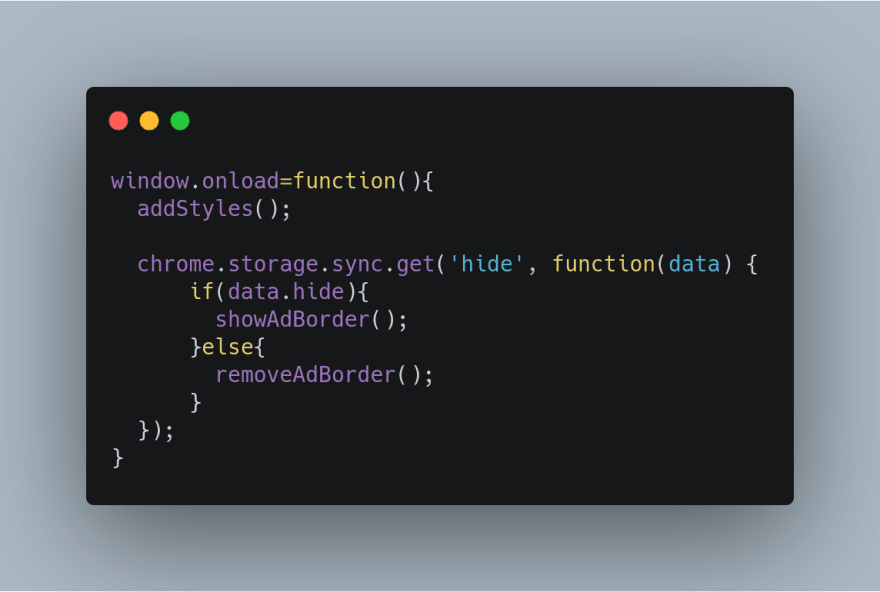 Save all the files (in case you haven't done it yet), because we're going to upload our extension!

Let's try it. Go to www.google.com, and look for something that will contain ads, like, basecamp or amazon 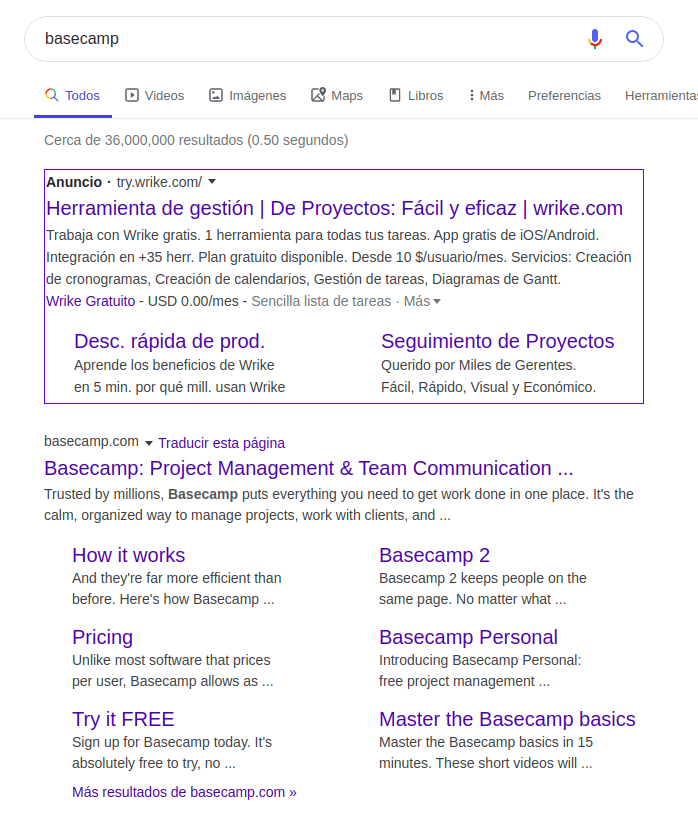 As you can see, there's an ad. How do we know it is an ad? By the blue border around it. Now, you can share this extension with others so they don't confuse ads with organic results anymore!

Let's finish our extension with something we should've done at the very first. From a terminal, run git init git add . and git commit -m "your message goes here" so your project is safe & you can modify it freely. For example, you can change the styles variable to add a background color like the ones ads had on the past.

Thanks for reading! Happy coding!

Kevin Alemán
Backend developer | Reader | Semi-writer | Golang | Node.js | PostgreSQL | Vim enthusiast I like to understand how things work under the hood, but not too deep.
You're doing great, and you need to hear that :)
#webdev #mentalhealth #beginners
The beauty of Streams in Node
#node #webdev #beginners #javascript
Building a new feature: talks preview
#gatsby #javascript #showdev #webdev

Once suspended, kaleman15 will not be able to comment or publish posts until their suspension is removed.

Once unsuspended, kaleman15 will be able to comment and publish posts again.

Once unpublished, all posts by kaleman15 will become hidden and only accessible to themselves.

If kaleman15 is not suspended, they can still re-publish their posts from their dashboard.

Once unpublished, this post will become invisible to the public and only accessible to Kevin Alemán.

Thanks for keeping DEV Community 👩‍💻👨‍💻 safe. Here is what you can do to flag kaleman15:

Unflagging kaleman15 will restore default visibility to their posts.