TL;DR I wanted to have a wiki-like language learning app, so I created LibreLingo.

Every morning, I make my smoothie and sit down to study a foreign language for half an hour. This has been part of my morning routine for years.

There is something relaxing and meditative about practicing languages: it's an infinite source of new challenges, but broken down with the right tools, those challenges never become stressful. This is a habit I can do anywhere, and I can start and finish whenever I want.

You might love it or hate it, but my go-to tool has always been Duolingo. It has everything I need: skills are small and roughly uniform in size. I almost never have to look up grammar, because grammar is incorporated into skills. I can dive straight in! That makes the routine more predictable. Isn't it much easier to stick to a habit that's predictable?

This is my ideal way to warm up my brain for more unpredictable challenges later in my day!

As a developer who loves open source, I want my essential tools to be open and hackable.

Duolingo offers a very wide variety of courses and an increasingly high variety of ways to practice. They, however, lack an open API, and although they have some open-source software and have released some of their findings, their course content, as well as their software is proprietary.

There are some great alternatives. Anki has a great license and customizability. Shared Anki decks offer a wide variety of content tailored to different needs.

That being said, all the alternatives I could find require the user to be much more proactive: you have to look up the grammar on your own, and you have to know what you want to practice, and in what order. This is ideal if you are experienced in learning languages and want to learn in the most efficient way, but it's not very beginner-friendly, and it's harder to make it into a habit.

The sheer size of the online language-learning and language nerd community, as well as the vast amount of user-created content, shows that there's great interest in creating resources. In a perfect world, these efforts could be channeled into a common cause: something like a Wikipedia of interactive online-learning resources, that offers a clean, fun, and consistent experience. Something that removed the barriers to learning a language and at the same time, gives the user more freedom in choosing how they want to learn.

For a very long time, I have been contemplating creating a project like that. Unfortunately, I had no experience in designing something so complicated. Even if I had a good plan, the amount and diversity of the work alone would mean that I need to attract some people to help me, and doing that without offering a direct financial incentive seemed impossible.

Eventually, I decided to just give it a go, and see what happens! If I could find the smallest module of this concept that people would find cool and useful, I could perhaps get some feedback or even incite interest in the project.

I chose to begin with building a simple front-end for practicing skills. This is the most concrete, visual, and user-centered part of the ecosystem I envisioned. Because it's simple and tangible, I felt that people would just get it.

Another reason why I started by building the practice screen is that there are many great examples of this feature, so I wouldn't really have to reinvent the wheel. Also, there are resources I could use for building most of this.

I considered that this part wouldn't initially need any sort of back-end, and I could get away with replacing the course editor with a couple of hand-written JSON files.

Immediately, I wanted to show it to people. Since what I had was working perfectly as a static site, I decided to simply publish it on GitHub pages.

Once I deployed to GitHub pages, I created a README.md, trying to be as informative as I could: I described the project and my motivations, and I laid out some possible milestones. I included a license and some notes about how to contribute.

All set, I was ready to post to Hacker News.

So far, LibreLingo received 620⭐ stars on GitHub. While I've had projects that attracted way more GitHub stars, I did not anticipate the amount of interest and contributions this very basic demo and product concept received.

Almost 70 people expressed their interest in working on course content, and many people contacted me with different ideas, proposals, and comments. A lot of people were enthusiastic and started contributing by creating issues and submitting pull requests!

Our contributors list now stands at 30 people, and with the contribution of Caroline Delesalle, we have our amazing mascot, Lili: 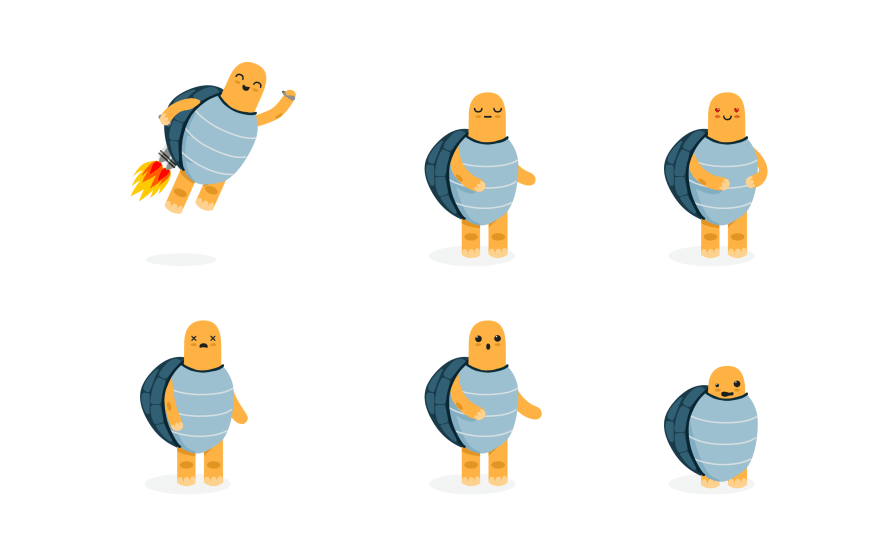 Someone even proposed a new design.

Thanks to PouchDB, LibreLingo users can now track their progress on their own devices. This means that storing user data doesn't require communication with a remote server. Thanks to that, the app is snappy and reliable: the functionality of the entire app can be made available without an internet connection.

What's also brilliant about PouchDB is that the data can be synced with a remote database, so the user can still see the same progress across multiple devices.

Another important piece of the puzzle is the course editor. I chose to implement it using Django Admin. It might not be the sexiest framework you can think of in 2020, but I knew from my previous work experience that it's incredibly easy to create CRUD apps with it. You just have to do define your database models, and Django creates your database and your admin app. 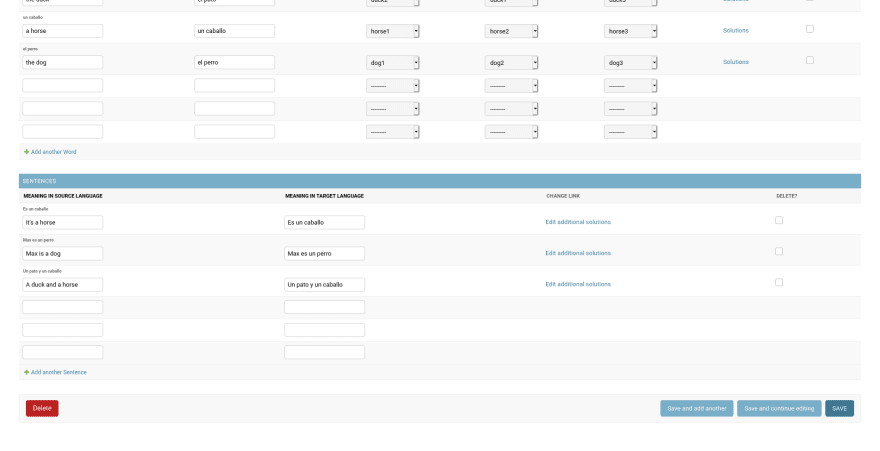 Once the course editor was working, I just had to deploy it to Heroku, create a simple script that can export the course data, fetch any missing illustrations from Unsplash, and generate any missing audio files using Amazon Polly.

In most projects, the first system built is barely usable... Hence plan to throw one away; you will, anyhow. - Fred Brooks, The Mythical Man-Month

An early adopter might be able to use LibreLingo productively already. Nonetheless, before widespread use, much work needs to be done on course content.

I want LibreLingo to empower anyone to work on courses. The real power of a wiki-like system would be unleashed by having content for minority/endangered languages, specific dialects and constructed languages through the enthusiasm of the language nerd community.

While the course editor is fully functional and makes it easy to edit the course content, it does not facilitate collaboration sufficiently. It's not enough to draw in a wealth of contributions, it's also extremely important to maintain an efficient, sensible, and fun course structure. To do this, the course editor would probably need to enforce some sophisticated constraints, and also have a way to determine who can approve content.

I have ideas on how to make this work: extend Django Admin with the required functionality. Or perhaps use Django to create a GraphQL or REST API, and build a custom frontend on top of that for the course editor. Perhaps move to a document store model for the course editor. Perhaps let some people experiment with course content being stored in a git repo for a specific course. Or try using a MediaWiki instance. If you know how to do this in baby steps, please head to this issue!

Want to help out LibreLingo?

Here's a couple ideas how you could get involved:

Hacktoberfest is a global hackathon event celebrating open-source software. To read more about Hacktoberfest, check out their website.

LibreLingo has a curated list of issues for Hacktoberfest.

Interested in learning more about the LibreLingo platform? Check out my new dev.to post about creating a LibreLingo-based app in Python!

I’ve been a contributor, mentor, and admin in Google Open Source programs

Daniel Kantor
Hi! I am a software developer who loves open source. My main pet project is LibreLingo 🐢 🌎 📚, an experiment to create a community driven language-learning platform
Explain the difference between shell, console, terminal, command line, etc. like I'm five
#anonymous #discuss #help
What's the difference between Front-end and Back-end development?
#anonymous #discuss #help
You will not do it later (most likely) - I'm a procrastinator, I know
#programming #discuss #watercooler #productivity

Once suspended, kantord will not be able to comment or publish posts until their suspension is removed.

Once unsuspended, kantord will be able to comment and publish posts again.

Once unpublished, all posts by kantord will become hidden and only accessible to themselves.

If kantord is not suspended, they can still re-publish their posts from their dashboard.

Once unpublished, this post will become invisible to the public and only accessible to Daniel Kantor.

Thanks for keeping DEV Community safe. Here is what you can do to flag kantord:

Unflagging kantord will restore default visibility to their posts.