I first heard about CSS Grid towards the end of 2016. I was sitting at one of my first Tech Ladies meetings and an attendee mentioned hearing how amazing it was. Fast forward a year and a half later and I’m finally digging deeper into Grid. As a devoted Flexbox user, I can already tell how this will be a game changer.

Grid is extremely easy to setup — all it takes is two lines of CSS.

And voila! You have a grid. Seriously, that’s all you need. It’s pretty great.

You’ll notice that, unlike when setting Flexbox to display: flex, adding display: grid to your wrapper doesn’t immediately make a difference. This is because you aren’t explicitly defining how many columns you want your grid to have. You’ll do this with grid-template-columns like I did above. So in this example, I’m setting three columns to have a width of 10rem each.

You can use any value you want when setting grid-template-columns, but I suggest staying away from percentages unless you’re trying to add up to 100%. This is because you will have to take your amount of grid-gap (which we’ll dive into in a little bit) into account, and that can get a little tricky.

Before I talk about explicit and implicit tracks, let’s first talk about what tracks are. Tracks are the space between two grid lines, either horizontal or vertical. Instead of counting the individual columns and rows by themselves, in CSS Grid you count them by the track lines. Here’s the grid we started with — I’ve numbered all of the track rows and columns to make it a little easier for you to see.

You can see that we actually have four column lines and three row lines. This will help when placing your items on the grid.

A quick side note: if you’re using Firefox it actually has some great dev tools for seeing the column and row track numbers. If you inspect your wrapper element and then go to the layout tab, check the box for your wrapper and now your grid will look like below! Chrome has also now added this feature in their dev tools.

This is a little confusing, so I definitely recommend messing around with CSS Grid on your own to see the difference between explicit and implicit tracks.

Think of grid gap like margin except it’ll only be added between items and not to the outside of the grid. I’ve run into so many cases when I add margin on items in a Flexbox grid only to have to go to the grid’s wrapper and set the same amount of margin, but negative, to offset the margin that gets set outside of the grid. Thankfully with CSS Grid, you don’t have to deal with that.

Let’s take our example CSS above and add some grid-gap.

I used the shorthand property grid-gap, but you can define an explicit value for the columns and rows by using grid-column-gap and grid-row-gap.

*Note: All browsers except for IE now all support using gap and column-gap/row-gap. *

Defining how wide you want each of your columns to be when using grid-template-columns with three columns that are all the same width is pretty simple. But that’s a lot of typing if you want any more columns than that. This is where the repeat() function comes in.

Here’s our example we’ve been using with the repeat() function added in.

As you can see in my CSS, I’m setting three columns each to be 10rems wide. This grid will look exactly like the grid pictured in our grid-gap example. By using the repeat() function we’re just making writing things a little simpler and easier to read for when you’re wanting to set a lot of columns.

Fractional units, or fr, are a new CSS length unit introduced with CSS Grid and one that I can see myself using all the time. Say we want three columns all of equal width. Instead of setting width: calc(100% / 3) on the items, we can use fractional units. Think of fractional units as “free space.”

Let’s continue on with our example that we’ve been using.

You’ll notice that the only thing I changed was grid-template-columns. I’m now telling the browser that I want three columns, and that I want each of those columns to take up one fractional unit or one “free space.” This works very similarly to Flexbox’s flex-grow property.

The reason each item is a little wider than in our previous example is that they are now taking up as much space as they can while still fitting in three columns. In this case, I didn’t set a hard width so they are taking up the full-width of my viewport. I know this is a little hard to see without having it on your own screen, so I definitely recommend messing with this on your own.

You don’t have to set all of your columns to be 1fr, either. Below is an example where I’ve set my first and third column to 10rems while my middle column is 1fr. You can also set your columns to 2fr, 3fr, and so on, and that column’s items will take up 2x, 3x (and so on) the amount of space.

Let’s talk about sizing our individual grid items. You cannot place a hard width on individual items, because we explicitly set the width with grid-template-columns. But what if you want item five in our example to be the width of multiple columns? We can do this using grid-column and span.

You’ll see above that we’re setting grid-column of item five to be a span of two which will allow item five to span a width of two columns.

But what if you wanted item five to span three columns? This is what will happen. 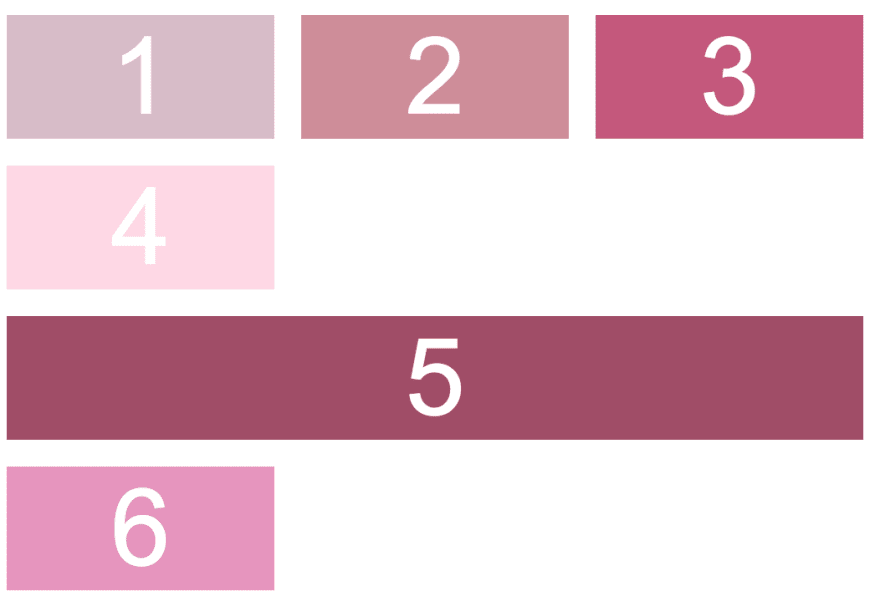 Because item five naturally starts at the second column, we don’t have enough space for it to span the total width we’ve set. So it will move down to the next row. You can apply the same concept from grid-column to grid-row if you’re wanting an item to span multiple rows.

There’s a pretty simple solution for fixing the blank space that’s leftover from item five moving down a row. It can be used whether you’re setting an item to span a row or a column — grid-auto-flow: dense.

In CSS Grid, the grid will automatically check to see if items fit. Like I said above if an item doesn’t fit it will break to the next line. Grid-auto-flow: dense tells the grid to fill in those empty spaces with any item that will fit. In this case, I’ve added a seventh grid item so the grid automatically moves that and the sixth item to the empty spots.

CSS Grid will always layout items that need to go in a specific spot first — in this case, item five, since it is spanning three columns. Then, if you have grid-auto-flow: dense set, it will look for other items to fit into the blank spots on the grid. 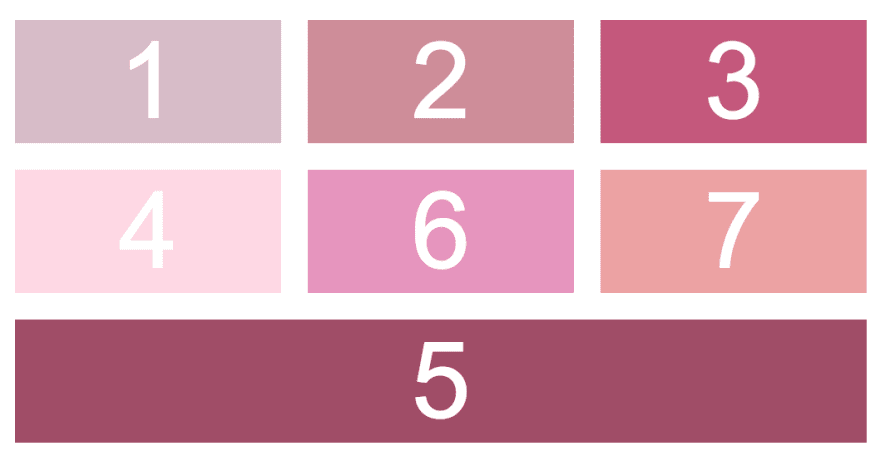 The grid-auto-flow property by itself determines in which direction you need to add another row or column after you’ve already defined your items. Row is the default. I haven’t see a big use case for this besides using grid-auto-flow: dense.

In our example with sizing individual grid items, we were originally setting item five to grid-column: span 2, which allowed item five to span across two columns. Actually, grid-column is shorthand for grid-column-start and grid-column-end. The same goes for grid-row as well.

Let’s work with item five again, and I’m going to show you this using Firefox's inspector tools so it’s easier for you to see what track line item five is at. I’ve also added a couple more grid items.

CSS Grid will layout all of the items before our fifth one, stop and then look at where we started and ended item five, and place it where we told it to. The shorthand of this would be grid-column: 1 / 3 where 1 is our start value and 3 is our ending value. 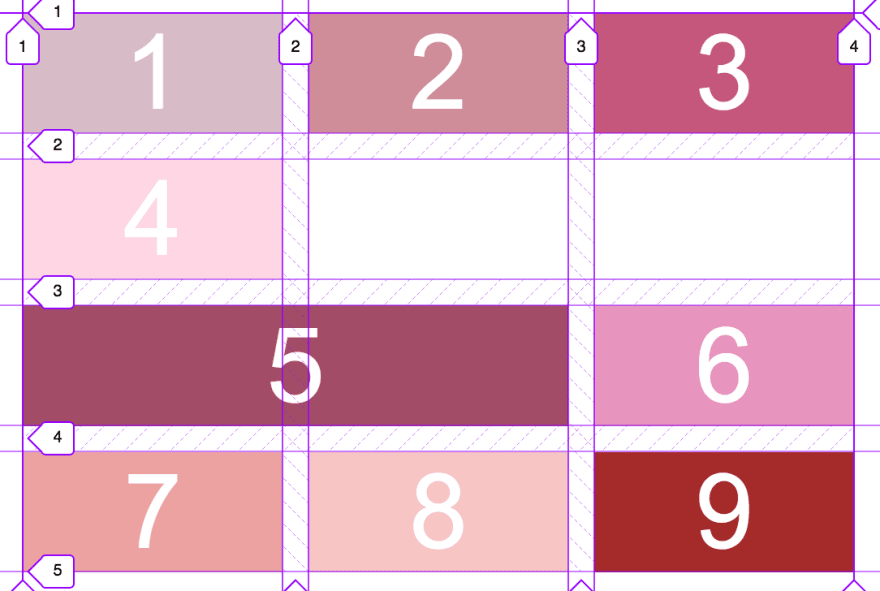 You can also tell an individual grid item how wide you want it to span and where you want it to end. I’m using the shorthand grid-column property in this example, so I’m telling item five to span two columns ending at track line four. 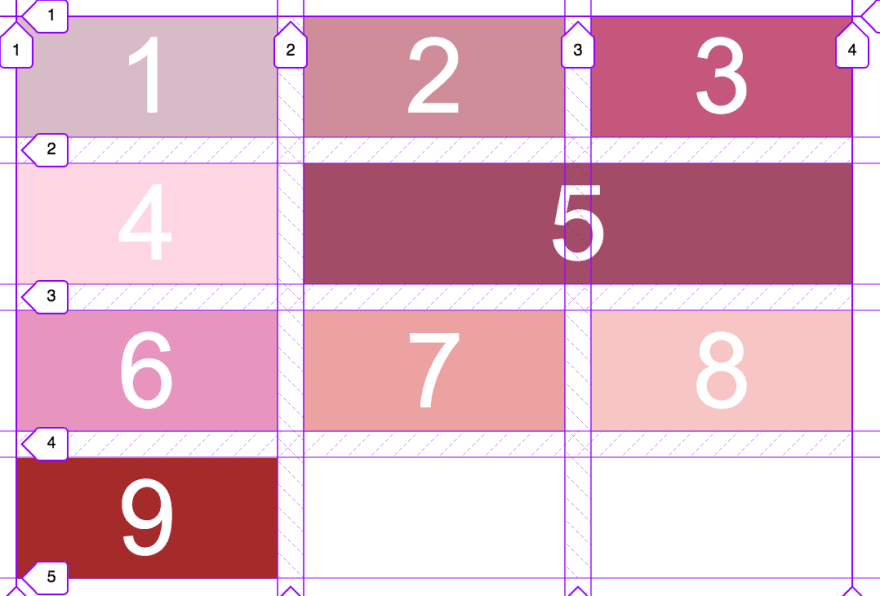 If you want your item to span the entire width of the grid, but don’t know how wide your grid is, you can set grid-column: 1 / -1. Basically that -1 value is telling your item to go all the way across to the last track. If you do this with rows you’ll notice that your item may not go all the way to the bottom of your grid. It will only go to the bottom of your explicit rows, not your implicit rows.

Here are some resources I highly recommend for a deeper dive into CSS Grid!

Once suspended, karaluton will not be able to comment or publish posts until their suspension is removed.

Once unsuspended, karaluton will be able to comment and publish posts again.

Once unpublished, all posts by karaluton will become hidden and only accessible to themselves.

If karaluton is not suspended, they can still re-publish their posts from their dashboard.

Once unpublished, this post will become invisible to the public and only accessible to Kara Luton.

Thanks for keeping DEV Community 👩‍💻👨‍💻 safe. Here is what you can do to flag karaluton:

Unflagging karaluton will restore default visibility to their posts.